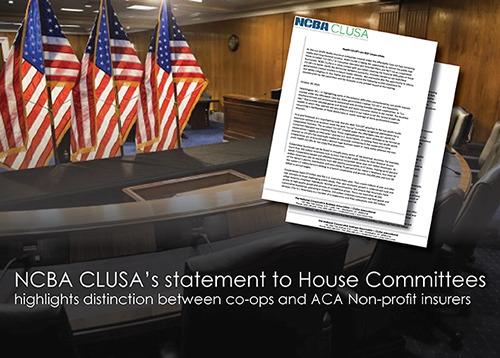 Continuing its efforts to protect the cooperative identity, NCBA CLUSA last week submitted a written statement for consideration by the U.S. House of Representatives’ Ways and Means Committee ahead of its November 3 Health Subcommittee hearing on the status of the non-profit health insurance companies created under the Affordable Care Act. While NCBA CLUSA remains neutral regarding the substance of these hearings, the statement clarifies the difference between the cooperative business model and the business structure of Affordable Care Act nonprofit insurers.

In their coverage of these struggling government-funded insurers, journalists continue to incorrectly refer to them as “co-ops”—short for “cooperatives”—rather than using the uppercase acronym “CO-OP,” which stands for Consumer Operated and Oriented Plans. While some of these nonprofit health insurance companies incorporated elements of the cooperative business model (which NCBA CLUSA applauds), they are not legally structured as cooperative businesses, thus NCBA CLUSA has repeatedly requested the media to not use “co-op” and “CO-OP” interchangeably.

NCBA CLUSA published a press release on October 20 that clarified the distinction between the nation’s successful, member-owned cooperatives and the ACA nonprofit health insurers (CO-OPs), which face growing financial difficulties and media scrutiny. Since then, NCBA CLUSA has been in close contact with journalists covering CO-OPs to avoid their further association with legally structured cooperative businesses, which inject $3 trillion into the U.S. economy every year and are vital to the continued development of rural America.

NCBA CLUSA urges its members and supporters to help raise awareness by continuing to share this informative press release with their government representatives and local media outlets.

Click here to find your representative by zip code or state.

It is critical that the cooperative community come together to protect the identity and reputation of the nation’s estimated 40,000 cooperative businesses.

Tomorrow, November 5, the House’s Energy and Commerce Committee will examine what it calls the “costly failures” of the Affordable Care Act’s nonprofit insurance loans. NCBA CLUSA has submitted a written statement for committee member consideration that highlights the incorrect use of the word “co-op” when referring to these loans. Visit ncbaclusa.coop at 10:15 a.m. EST tomorrow to watch a live stream of the hearing.