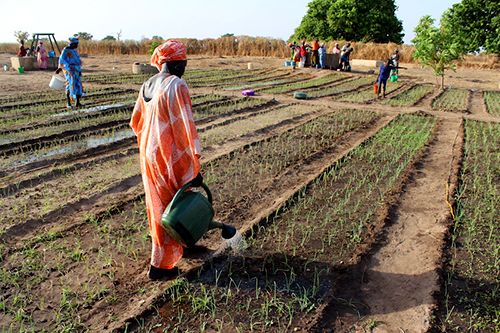 Seventy farmers trained in conservation farming by NCBA CLUSA were among the close to 100 farmers invited by the Namibian government to demonstrate climate-smart agriculture practices during the country’s Conservation Agriculture Information Day last month.

The demonstration was held June 17 to commemorate the 2015 World Day to Combat Desertification, a United Nations global observance day to curb desertification and the effects of chronic drought through public awareness and international cooperation. Namibia’s Ministry of Environment and Tourism dedicated this year’s observances to recognizing the success of conservation farming.

“I am impressed with the overwhelming interest to adopt climate-smart farming methods, and I would like to express my sincere thanks to the Ministry of Environment and Tourism for choosing to highlight Conservation Farming as a means of combating desertification and creating food security,” NCBA CLUSA Project Coordinator for Namibia Inomusa Nyati told the New Era Newspaper.

“Farmers are experiencing the negative effects of depleted and unproductive soil, but they are also realizing that all is not lost because with conservation farming they are able to regain maximum crop yield and contribute to the food security of both the household and the general public,” Nyati said.

“When listening to the farmers … it is clear that we have to do our upmost to support the widespread uptake of [conservation farming], as yields are increased when improving degraded soils. The farmers are the witnesses to that,” said Ndapanda Kanime, chief conservation scientist responsible for bio-diversity and sustainable land management for Namibia’s Ministry of Environment and Tourism (MET) and one of the event organizers.

MET Chief Warden Monika Shikongo is among observers who say a focus on land management through conservation farming is critical to addressing food insecurity in Namibia. The UN Food and Agriculture Organization’s 2015 State of Food Insecurity in the World report indicates that 42 percent of Namibians are undernourished. Hunger is most prevalent in Namibia’s driest areas, where water retention is poor and the land is most vulnerable to natural and human destruction.

“We heard from farmers that are successfully producing enough food for their households, and even surplus for the market—in a drought year,” Shikongo told the New Era Newspaper.

The conservation farming and early planting techniques recommended by NCBA CLUSA’s $2 million USAID-funded Namibia Conservation Agriculture Project (NCAP) helped farmers in Namibia not only withstand but thrive during a national drought emergency in 2013.

Currently, NCAP is teaching more than 10,000 farmers how to maximize rainwater retention, protect soil fertility and increase crop productivity through conservation farming techniques adapted to suit Namibia’s climate and soil. By digging deeper furrows—either with a Namibia-specific ripper or hand hoe—farmers are able to break up the hardpan, harvest rain water in-field and guide that water to the planting lines to maximize moisture absorption and avoid runoff. Farmers are now harvesting 3,680 pounds of millet per 2.5 acres, compared to 660 pounds prior to project interventions.