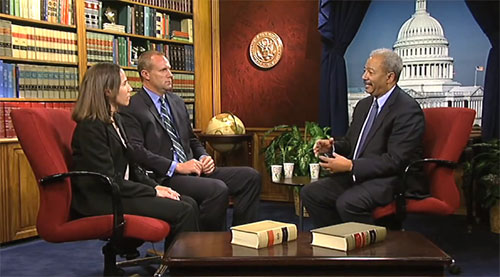 With its entrepreneurial instinct and economic opportunity, the U.S. is primed to foster cooperative growth, Knapp said. “More and more people want to own their own businesses; they want to have a vote and a say in those businesses, so co-ops are really growing.”

When it comes to raising awareness of the scope of the movement and improving its profile and potential, there’s still work to be done, Knapp and Fattah agreed.

That’s exactly what Congressman Fattah’s bill, “Creating Jobs through Cooperatives Act” (H.R. 2437), aims to achieve. If enacted, the bill would authorize the U.S. Secretary of Housing and Urban Development to establish a national cooperative development program with $25 million annually in funding through 2017.

“Legislation would create, for the first time, a federal impetus to help provide assistance to develop more cooperatives to provide goods and services in communities that are underserved,” Fattah said.

One such community, downtown New Haven, Connecticut, found a cooperative solution to its shortage of affordable, fresh, healthy food. By late 2009, the food desert hadn’t had a full-service grocery store for more than a decade. When conventional grocers expressed disinterest in coming to the city, a group of property owners and concerned citizens banded together to establish Elm City Market, a member-owned cooperative grocery store.

“That’s what we’re trying to communicated to people—that you don’t have to go without goods and services, that there’s a way to take the economic energy in a community and bring it together to meet needs,” Fattah said.

Mary Alex Blanton, a senior vice president for National Cooperative Bank, also a guest on the June 22 program, shared a similar cooperative success story. Her organization last year provided a $30 million mortgage to a limited equity housing co-op in The Bronx—the oldest such co-op in the U.S.

“It’s a model that works,” Blanton said. “It’s replicable, and affordable housing is so critical today. We’re not just talking in rural markets, but urban markets where people like teachers and police officers can’t live tow hours outside of the city. They need to be able to afford to live where they work,” she said.

Blanton’s organization publishes the annual Co-op 100 report, meant to shed light on how big a sector of the economy cooperatives really are. The need for better education about co-ops is “critical,” she said.

“We know that when businesses are going through the process of succession, that if the business closes down or is sold, a lot of time we lose those jobs in the community,” Fattah said. “But when it’s sold to the employees, we know through empirical evidence that 98 percent of the time, the jobs stay right in the community,” he said.

There are now 29,000 cooperatives in the U.S. accounting for more than $3 trillion in assets, more than $500 billion in total revenue, $25 billion in wages and benefits and nearly two million jobs.

Pennsylvania’s 2nd—the “best Congressional district in the country,” Fattah said—is home to a burgeoning cooperative movement. With locations in Mt. Airy and Chestnut Hill, Weavers Way Co-op supports local farmers and businesses and gives back to the community by providing local, sustainable and organic foods at affordable prices.