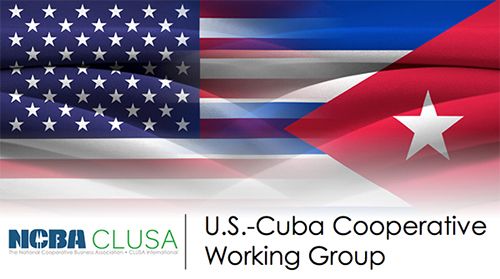 American University’s School of International Service’s Global Environmental Politics program will host NCBA CLUSA’s U.S. – Cuba Cooperative Working Group for a panel discussion on the cooperative movement in both countries on Monday, May 4, in Washington, D.C.

The brown-bag lunch discussion is open to the public and scheduled for noon to 2 p.m. in the Abramson Family Founders Room of the School of International Services building. The event will be held in English and Spanish, with translation provided. Light refreshments will be served.

For additional details, email Garrett Graddy-Lovelace at graddy@american.edu. Graddy-Lovelace, who will open the discussion, is a PhD Assistant Professor in American University’s Global Environmental Politics Department and an expert on Cuban cooperatives.

NCBA CLUSA’s U.S. – Cuba Cooperative Working Group (USCCWG) was established in 2014 with a mission to build a stronger and more vibrant cooperative movement in the U.S. and Cuba. In early March, NCBA CLUSA formally launched the USCCWG and released a report on the emerging role co-ops are playing in Cuba’s economic reform based on findings from a research and education trip to Cuba in July 2014.