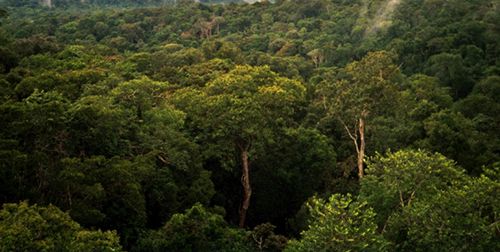 In 2013, NCBA CLUSA member National Co+op Grocers partnered with international environmental organization Pur Projet to establish the Co+op Forest—a living forest in the Peruvian rainforest that has now offset 2,000 tons of CO2 since it was planted by local cooperative farmers. Last month, NCG announced an expansion of the project that includes beekeeping. Their press release follows:

National Co+op Grocers (NCG) recently announced its Co+op Forest carbon offset program has expanded to now include an estimated 837,000 trees in an at-risk region of the Peruvian rainforest and, new this year, will also help support the reintroduction of beekeeping to the area.

Launched in 2013, the Co+op Forest initiative offsets greenhouse gas emissions associated with NCG’s business travel and utilities in each of its main offices. NCG partners with PUR Projet—an international organization preserving ecosystems in disadvantaged communities—to grow the Co+op Forest by working with local farmer cooperatives to plant and maintain native trees in the Peruvian Amazon. The Co+op Forest is part of a system of sustainable agroforestry in the region, where local farmers produce fair trade, organic products—some of which are sold in NCG’s retail food co-ops nationwide.

This year, NCG’s Co+op Forest will expand to the Alto Shamboyacu community, which is home to roughly 150 families—mostly organic, fair trade coffee and chocolate producers who belong to the Oro Verde Farmer Cooperative. The cooperative works to increase crop yields by training farmers in sustainable agroforestry techniques to complement and preserve the surrounding rainforest. As part of this year’s carbon offset purchase through PUR Projet, NCG is compensating the farmers to plant and maintain 1,458 native trees among their crops. These new additions to Co+op Forest will improve crop yields by providing needed shade, creating habitat for other native species, and eventually generating income for the community from FSC-certified timber—all the while sequestering tons of greenhouse gases as the trees mature.

“It requires a considerable amount of travel to serve all 148 NCG co-ops nationwide, and the Co+op Forest allows us to offset the resulting greenhouse emissions in a way that reflects not only our core value of sustainability, but also provides opportunities for cooperatives 3,000 miles away to thrive,” said Robynn Shrader, CEO of NCG.

“This year, we chose to expand our support to the Alto Shamboyacu community because, in addition to slowing climate change by planting trees, the local farmer-owned Oro Verde Cooperative is addressing another critical sustainability issue—helping to protect the world’s pollinators,” Shrader added.

Oro Verde Cooperative works with farmers to revitalize beekeeping, a tradition for the area’s indigenous culture that has been largely abandoned in modern times. “This project is important because honey bees will pollinate fruit trees and crops in the region. It is also very complementary to the reforestation project as the planted trees are of great diversity, which is very useful to bees,” said Teofilo Beingolea, agricultural engineer at Oro Verde Cooperative. “This apiculture program is also important for farmers because it will allow them to diversify and spread their revenues over the year. Once the coffee production is completed, they can dedicate themselves to producing and selling honey.”

NCG will also commit this year to conserving an additional 1,200 acres in the old growth forest of the San Martin BioCorridor—a lush, mountainous landscape in northwestern Peru that is highly biodiverse—and planting 729 native trees in the deforested Alto Huayabamba region. Both are areas that NCG has supported in past years, bringing the total number of trees that call Co+op Forest home to an estimated 837,000.

PUR Projet is an offspring of fair trade food company Alter Eco, born out of the deep relationships it has built with small-scale farmers over the years. “After seeing first-hand the effects of climate change and deforestation in the region, the need for reforestation and conservation programs was evident,” said Mathieu Senard, Alter Eco co-founder and co-CEO.

“We’re very happy and honored that NCG has partnered with PUR Projet to create the Co+op Forest,” Senard said. “By protecting roughly 837,000 trees in the Peruvian Amazon, NCG has mitigated 2,000 tons of CO2 since 2013, and is making a big impact in the lives of the farmers and on the environment.”

The following NCG member co-ops have also made individual contributions to the Co+op Forest to meet their own sustainability goals: