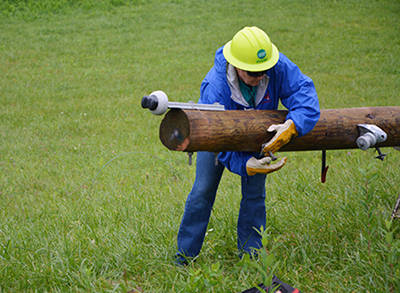 When middle school science teacher Jamie Mosley flipped on a light switch, she never thought twice about what happened on the other side of the wall.

But after spending five weeks working alongside lineworkers, engineers and others at electric co-op Surry-Yadkin EMC, Mosley gained a deeper understanding of the industry and valuable insights to share with her students.

The Dobson, North Carolina-based co-op sponsored Mosley as part of a teaching fellowship based at North Carolina State University that boosts teachers’ STEM—science, technology, engineering and math—education in K-12 classrooms with professional development workshops and “externships,” or experiential learning opportunities.

Mosley said the experience made her a better science teacher.

“They’ve energized me. There are so many things I want to tell and show my students,” said Mosley, a 32-year member of Surry-Yadkin who teaches in Mount Airy. “This has been an opportunity to make learning real.”

Mosley is one of the first teachers sponsored by an electric cooperative under the Kenan Fellows Program, an initiative that since 2000 has paired teachers with mentors in research or industry settings to learn how STEM subjects can be relevant to students.

“They took me in from day one, and I saw every department, firsthand. They sat me down and explained everything, and then I went out with a line crew for three days,” Mosley said. “They gave me a shovel, my own hard hat and my own set of gloves.”

The days of stringing lines, installing poles and touring a nuclear and natural gas plant led Mosley to develop “Generation, Transmission and Delivery of Power,” a classroom lesson for her seventh-grade science students that will eventually require them to create and electrify a miniature village.

“When my kids flip that switch, I want them to know where the light comes from,” she said.

North Carolina’s Electric Cooperatives facilitated the Surry-Yadkin EMC partnership and is encouraging other co-ops to consider hosting a Kenan fellow as an investment in their communities’ economic futures.

Adam Martin, Surry-Yadkin EMC’s marketing and economic development coordinator, arranged Mosley’s five-week stay. He said more efforts to bring innovative educational opportunities will “touch the lives of many other students statewide by preparing them to obtain jobs in the future that rely heavily on STEM principles, even though many of these jobs may not yet exist.”

Elaine Franklin, Kenan Fellows director, wants more teachers outside the state’s population centers to benefit from the program’s opportunities. Calling the experience with Surry-Yadkin EMC “an important partnership,” Franklin said she would like to involve more co-ops as mentors and sponsors.

“We have a large rural population in North Carolina, but we don’t have Research Triangle industries all throughout the state,” Franklin said. “But we know simply because we’re in the new age of technology that there are STEM jobs in virtually every community. Co-ops could be a great way to provide these fellowships in a more equitable way in rural communities.”