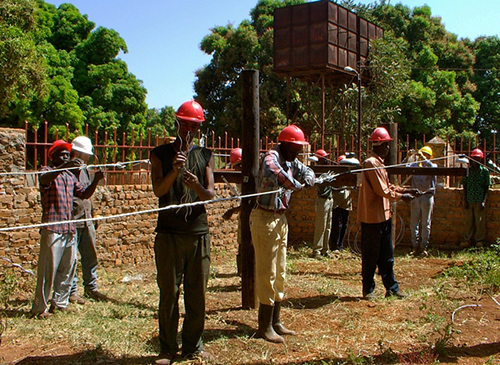 The National Rural Electric Cooperative Association is welcoming the introduction of the Electrify Africa Act of 2015 by the U.S. House of Representatives Committee on Foreign Affairs.

Electric co-ops have provided electricity to Americans without this essential service for 80 years, and began a program to bring electricity to rural communities internationally during the Kennedy Administration, NRECA CEO Jo Ann Emerson said.

“The Electrify Africa Act will continue that proud tradition by establishing public-private partnerships to bring electricity to 50 million people in Africa by 2020, particularly in rural communities,” Emerson said.

NRECA International recently contracted with Sierra Leone’s Ministry of Energy to prepare a transmission and distribution investment plan that will be used by the Government of Sierra Leone to expand reliable electricity services to its capital, Freetown, and surrounding areas. Funded by the World Bank, the project will ultimately support a larger expansion plan that will serve the capital and the entire country.

The National Rural Electric Cooperative Association is the national service organization that represents the nation’s more than 900 private, not-for-profit, consumer-owned electric cooperatives, which provide service to 42 million people in 47 states. NRECA is a member of NCBA CLUSA.