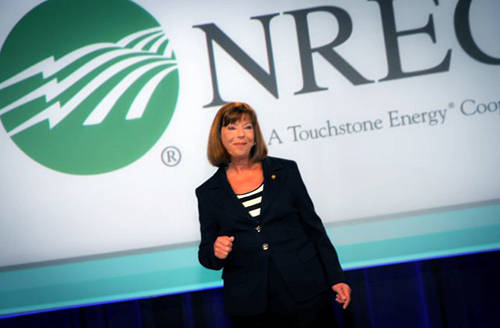 “If you’re going to tweet anything today, tweet this: We do local politics on a national level,” Emerson said Feb. 23 during her keynote address at the first general session of the 73rd NRECA Annual Meeting in California.

In a spirited support of the cooperative model, Emerson called on co-op leaders from across the country to recommit to their members as the best way to be heard in the political corridors of Washington, D.C.

“The more technology we deploy, the more clout we have,” she said. “The stronger we are in politics, the more change we make in our communities. The better we serve consumers, the more trust we gain in the halls of Congress.”

Under the theme of “Commitment, Engagement, Cooperation,” Emerson said co-ops have proven they can make a difference by delivering 1.2 million comments to the Environmental Protection Agency on its greenhouse gas rules.

And, in recent years, co-ops have gained service territories from some investor-owned utilities and municipal systems, she noted.

“We’ve acquired more members and we can serve them better. That is the cooperative difference. We are committed to our members,” Emerson said.

The challenge, she told directors, managers and staffers, is to fortify those bonds during a time of rapid economic, social and technological change.

In the coming years, that means extending a hand to some of the 160,000 active-duty U.S. service members who transition out of the military every year.

“Help them find jobs in the community at your co-op or elsewhere. They will identify with you,” Emerson said, noting that co-ops will have more than 14,000 jobs to fill in the next five years.

Other tools to engage members include embracing smart technology in a cooperative manner, addressing the causes of poverty in rural America and stepping up NRECA International efforts to bring electricity to 1.5 billion people around the world who are now in the dark.

“No matter where you are in the country, no matter how big or small, no matter what kind of fuel you use or generate, let’s put the cooperative difference at the center of our mission,” Emerson said.