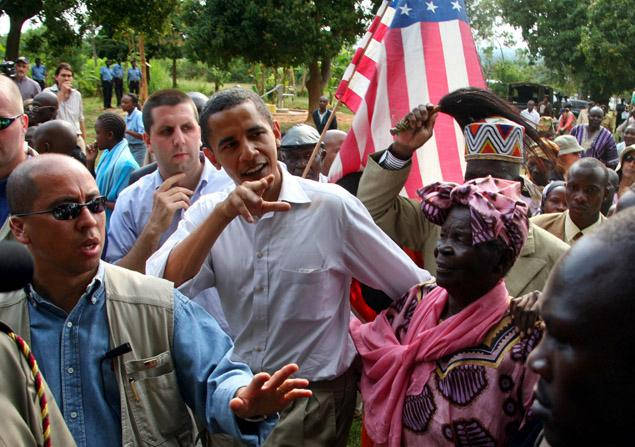 (WASHINGTION, DC) – Arriving Wednesday, June 26, President Barack Obama’s first stop on his African tour is to Senegal, where his visit highlights the importance of his Administration’s focus on its flagship Feed the Future initiative. NCBA CLUSA is the lead implementer of the first Feed the Future project and shares the Administration’s concern for the Sahel region of Africa where the United Nations reports more than 10 million people are food insecure, of which 2.5 million suffer from moderate to severe malnutrition.

“Food security has been one of our (Obama Administration’s) key development priorities, in which we’ve brought together the international community as well as the private sector behind approaches that strengthen African capacity in developing agricultural sectors that better feed the populations,” said Ben Rhodes, Deputy National Security Advisor, during a White House briefing on Obama’s African schedule.

According to Obama’s schedule, on Friday June 28 he will have the opportunity to see the results that are being generated by this critical implementation. “President (Obama) will join an event that brings together private sector leaders and people from the agricultural sector in Senegal and across West Africa, and he will hear about the efforts that are being made to enhance food security…” stated Rhodes.

NCBA CLUSA launched the United States Agency for International Development (USAID) funded “Yaajeende” (meaning “abundance”) food security project in November 2010. Since then the project has demonstrated a 22% increase in children aged 6-23 months consuming a Minimal Acceptable Diet, the World Health Organization’s measure of what is needed to ensure appropriate growth and development. This is a major milestone, not only for Feed the Future, but also for NCBA CLUSA’s Nutrition-led Agriculture’s (NLA) innovative, integrated approach that determines what crops to produce and where to produce them based on the nutritional deficiencies of that region, as well as on market and income-generation potential.

A USAID case study has shown that USAID|Yaajeende has also achieved a 51% increase in iodized salt use, and an average of 21 kg of vegetables consumed by beneficiaries of community and home-garden interventions. In addition, over 160,000 participants have been reached with nutrition behavior changing activities and agricultural training.

Women are a major component of the USAID|Yaajeende project, managing and farming 330 community gardens, a major feature of the NLA approach. This, along with Bio-Reclamation of Degraded Lands (BDL), helps women gain land tenure to otherwise unused land that can be cultivated back to life for food production through special farming techniques. Mother-to-Mother group training, community meals, and education on sanitation and hygiene are other important ways NCBA CLUSA is integrating ways the program is achieving improved nutritional outcomes.

Increased production and economic growth have been the hallmarks of most agricultural projects. However, solely using those measurements is not always enough to reverse malnutrition, particularly among children under 5.

“By cultivating wild foods and improved crops, including bio-fortified varieties with higher nutritional value, and by teaching women producers the importance of micronutrients, such as iodine, Vitamin A, and zinc, to their health, we are changing how the poor are producing, accessing, and consuming food,” says NCBA CLUSA’s Chief Operating Officer, Amy Coughenour Betancourt.One of the project’s most important innovations is the development of what NCBA CLUSA has coined “Community Based Solution Providers” (CBSP)—independent agents who market and distribute agricultural and nutritional supplies and services to smallholder farmers, farmer cooperatives, and communities who are typically hard to reach and have trouble accessing suppliers and markets. To date, these agents for agriculture and nutrition have delivered services and products worth over $700,000, which is serious income in Senegal’s rural economy.“NCBA CLUSA is dedicated to tangible, sustainable solutions to food security around the world, and engaging our membership with opportunities to help through our Farmer-to-Farmer program,” said Mike Beall, President of NCBA CLUSA. “President Obama’s visit to Senegal highlights the importance of the progress being made, in a country that has tremendous potential. NCBA CLUSA is proud to play an active role in improving the quality of the lives of the people of Senegal.”USAID|Yaajeende is a five-year, $40 million initiative of USAID Senegal under the Feed the Future program implemented by NCBA CLUSA in partnership with Heifer International, Counterpart International, Sheladia Associates, Inc., the Senegalese Institute for Agricultural Research (ISRA), Senegal’s National Malnutrition Prevention Unit (CLM), and hundreds of local governments, NGOs, and communities in 3 districts of Senegal.NCBA CLUSA is a signatory to a $1 billion Food Security pledge by 33 NGO members of Interaction dedicating private resources to food security around the world. Visit ncbaclusa.coop for more information.The National Cooperative Business Association CLUSA International (NCBA CLUSA) is the apex association for cooperative businesses in the United States and an international development organization working in areas such as food security, climate-smart agriculture, and cooperative development. NCBA CLUSA provides cross-sector education, support, and advocacy that helps co-ops thrive. For nearly 100 years NCBA CLUSA has sought to advance and protect cooperative enterprises, highlighting the impact that cooperatives in bettering the lives of individuals and families. In the last 60 years, NCBA CLUSA has the improved economic and social well-being of millions of farmers and their families in over 100 countries.