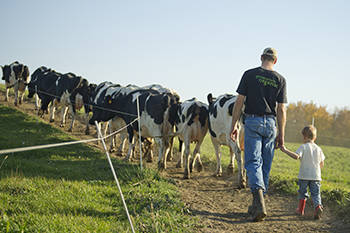 A new kind of farm crisis is looming. As farmers retire, there’s a significant and growing chance that their land will not remain in the family—or even in farm production—for the next generation. NCBA CLUSA member Organic Valley is working with farmers to keep agriculture accessible to people who want to stay on the family farm and to attract more people onto land to begin farming. StrongerTogether.coop, the consumer-facing website of National Co+op Grocers, published this story:

Generation Organic—“Gen-O”—is Organic Valley’s program to nurture farmers under the age of 35, providing education and giving them tools to support their operations.

The parents of these young farmers lived through the farm mortgage crisis of the 1980s and a bottoming out of commodity markets. In 1988, one group of farmers in southwestern Wisconsin organized the Coulee Region Organic Produce Pool (CROPP)—the producer cooperative behind the Organic Valley name—in order to survive.

Organic Valley started for one reason: to save family farms. Now with more than 1,800 members from coast to coast, Organic Valley is the largest organic farmer-owned cooperative in North America. Farmers have an integral role in how the co-op is run; they serve on its board of directors and executive committees, determine fair and stable milk prices that cover their production costs, and give voice to issues and challenges facing farmers around the country. As demand increases for organic products, the cooperative is helping farmers to not simply survive, but to thrive.

“It’s a huge change from the 1980s, when farm parents were telling their kids to get off the farm and go elsewhere if they wanted to have a successful career,” explains Kristina Ralph, the Gen-O program coordinator at Organic Valley and one of its member farmers. “Now parents connected to Organic Valley are saying, ‘Farming is a viable option.’ It’s a huge change in agriculture.”

Young Organic Valley farmers and the children of farmers first came together in 2006 to network, share ideas and have conversations about the future of the CROPP co-op. By 2013, Gen-O had developed into a more formal group guided by a nine-member executive committee of farmers and a mission statement.

“Our mission is to build and inspire a community of engaged young farmers, safeguarding and shaping the future of CROPP Cooperative through education, support and leadership,” Kristina says. “Gen-O farmers support each other. We are learning to become leaders on our farms and within the co-op itself.

“The core of Gen-O is focused on future farmers and succession planning,” Kristina says. She explains that, among farms that have been operated by the same family for two or more generations, an estimated 70 percent will not pass on to a successor and will instead be sold.

To counteract that trend, Gen-O is embracing one of the seven cooperative principles: education, training and information for members. Leadership development, succession planning, ensuring a livelihood for young farmers, and ensuring that organic farming is sustainable are key topics. Gen-O is helping farmers develop new skills and giving them the tools to engage in their community as advocates for organics and farming. It’s also providing advocacy training on the best ways to approach elected officials on farming issues and agricultural policy.

The future viability of farming is intrinsic to Generation Organic, Organic Valley and the farmer-owners who are caring for the land and animals that provide their livelihood and nutritious, wholesome foods for consumers. “What excites me about Gen-O and young farmers is a general sense of reinvigoration of young people who want to farm,” Kristina says. “Not just at Organic Valley. Small organic farms across the nation are changing our agricultural landscape into more of a community, which is what family farming is all about.”