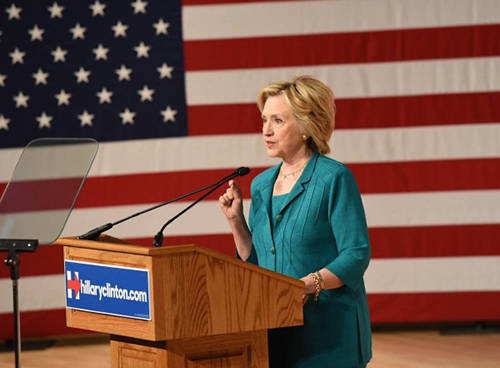 In an interview with the Daily Times Herald Sunday, Clinton talked about her role as senator of New York from 2001 to 2009. The state’s second-biggest industry was agriculture, and Clinton highlighted the important role played by rural electric co-ops across the state’s rural areas.

She called for more cooperatives in the retail sector to cut costs and “channel some of those saved resources into economic development and into a broader market outreach by small towns.” Clinton also said there was a need to reinvent cooperatives for the future, allowing them to help entrepreneurs work together to share resources or staff.

During her time as senator, Clinton worked on a number of e-commerce initiatives to help small businesses market their products. In 2003, along with the St. Lawrence County Chamber of Commerce, she developed the Northern Adirondack Trading Cooperative (NATC).

This helped small, rural businesses expand their markets via the Internet through training and professional support. Known as the ‘eBay project’, NATC linked artisans and small business owners with technology such as eBay to reach national markets.

Between January 2009 and February 2013, while she served as secretary of state, Clinton visited cooperative enterprises in Africa and Asia funded through the U.S. Agency for International Development (USAID).

Clinton is not the only presidential candidate to express support for the cooperative business model; Bernie Sanders, from Vermont, is also a keen supporter of co-ops and employee-owned enterprises.

In 2014, Sanders introduced a two-bill package to help workers who want to form their own businesses or set up worker-owned cooperatives. His economic agenda includes developing new economic models to increase job creation and provide assistance to employees who want to buy their business by setting up worker co-ops.