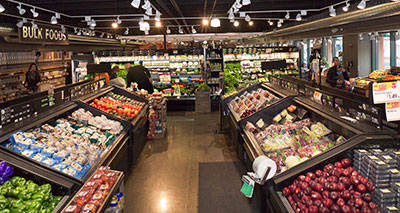 This Earth Day, we wanted to highlight a dedicated green business. In a recent article published by Stronger Together, Jennifer New profiled the Elm City Market Food Co-op in a former food desert in New Haven, Connecticut. If you forget your reusable shopping bag at this co-op, just borrow one from a lending tree of cloth bags near the checkout stands, which are made from reclaimed Berkshire barn wood.

Turing a dollar into platinum

Just a buck – that’s how much it cost to put Elm City Market Food Co-op on the ground floor of a new venture that would bring natural and organic foods to downtown New Haven, Connecticut. Because the most densely-populated urban area in the state had been a food desert for decades, the city’s caveat for its meager price tag was a grocery store. What it also ended up getting in the deal was the first LEED Neighborhood Development Platinum-certified project in the country.

The project’s developer and architect, Connecticut-based firm Becker + Becker, was intent on building a residential space that was anchored by a grocer and perhaps one other business. As they invited national and regional grocery store chains to join the project, however, they were unanimously rejected.

“These name-brand stores have deeply entrenched prejudices against urban areas,” says developer-architect Bruce Becker. “When they look at them to measure profitability, all they see are lower incomes and higher taxes, sites with constrained parking and loading, and higher operating costs.” The building would be in walking distance from one of the country’s best-known universities and several of its oldest and most celebrated pizza parlors, but it was also in the midst of a downtown that has a 25 percent poverty rate.