Jonathan Bethony, founder and owner of SEYLOU Bakery & Mill in Washington D.C., recently connected with NCBA CLUSA to learn more about the Millet Business Services Project in Senegal. Funded by the U.S. Department of Agriculture (USDA), the project is supporting millet farmers and processors—many of them co-ops—to improve their value chain and connect to local and international markets. After the trip, Jonathan explained why he’s hooked on millet and the special connection his bakery has with Senegal. He writes a guest blog below:

At SEYLOU Bakery & Mill, we specialize in integrating freshly-milled local cereals such as millet, sorghum, corn and buckwheat into products traditionally made with only wheat. Our pastry chef, Charbel Abrache, has taken to using exclusively millet in many of his cookies and cakes. When millet is milled, it has the aroma and flavor of vanilla beans. In addition to being a super-food packed with nutrients, it is naturally gluten-free. Inspired by our recent trip to Senegal with NCBA CLUSA, we are thrilled to be forging a new path with this ancient grain right here in DC, and hope to be able to collaborate and share our inventions with Senegalese bakers.

You may be wondering how this journey began. It was late spring here in Washington D.C. when my wife and I were touring an organic farm just outside the city in hopes of sourcing enough wheat to supply SEYLOU for the upcoming year. Heinz Thomet, the farmer who is originally from Switzerland and who has been deeply inspired by the techniques of Rudolph Steiner, was happy to walk us through his fields. Walking beside him, we could feel how connected to and proud he was of each crop dotting his plots. I was surprised to learn how little fertilizer—if any—he uses, and was impressed by the vast diversity of grains and seeds grown. We stopped near a freshly planted plot of wheat. Gazing across his fields, he said, “So now you know a little bit about what it takes for me to grow wheat the way I do by using crop rotations, but you’re only interested in the wheat. What about my millet, sorghum, beans, mustard and camelina?”

Bethony inspects the millet fields in Guague Cherif Village, Senegal on his recent trip with NCBA CLUSA. It suddenly dawned on me that up until that time, I had not really considered the role of other local grains and seeds in the organic farming that produces the wheat used in my breads and pastries. I began including the other local cereals into my mixes and the results were outstanding. It was a winning combination. Flavor and nutrition were in greater abundance and I was better able to support my local farmer. Immediately, I set my pastry chef on a mission by telling him to use only millet flour for a week—for everything! He nervously agreed. At tasting time, he was beaming with confidence, saying, “At first I was scared to try, but now I can say that I’m falling in love with millet.” He laid before us an array of cookies and cakes he had fashioned without using any wheat, only millet flour. Many of these experiments have made it onto our menu, such as our millet canelé and millet chocolate chip cookie.

During the fall of 2017, we were fortunate enough to go to Senegal with NCBA CLUSA to learn about their Millet Business Services Project in partnership with USDA. From farmer to processor to consumer, the program was hard at work forging and improving a value chain. Since the project was in its second phase, the focus had shifted from production to end use and marketing. We discovered that there was a push to start integrating a percentage of millet into local bread production. Senegal does not grow any of its own wheat and relies entirely on imports. It also has a bread culture, meaning bread is eaten nearly every day by almost everyone. It was evident that introducing a percentage of local grains into the daily bread of the Senegalese population would keep large amounts of money inside the country while providing jobs. We are honored to become a part of this important work.

Our experience of the Senegalese culture has been one of connection, family and love. In fact, the name of our bakery—SEYLOU—was inspired by a majestic eagle that was sighted just outside the city of Kaolack in the south of Senegal. In Senegal, it was evident that everyone working in the the Millet Project was truly sincere about this work, and I was moved by the careful attention each endeavor was given, whether it be compost, millet harvesting, milling or selling porridge. We witnessed the blossoming of seeds sown, laden with opportunities and greater health for land and people. Our intention is for SEYLOU Bakery & Mill to bring the same to D.C. 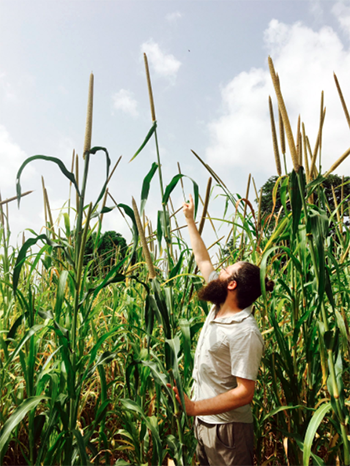