Vilsack spoke at the Farm Bill Rural Development Innovation Summit hosted at NCBA CLUSA headquarters in Washington, D.C. on March 1. Designed to apply methodologies borrowed from the technology sector to federal rural policy development, the summit amplified the need to put people at the heart of policymaking.

While the technology design process hinges on creating and testing prototypes with real people, legislation doesn’t often follow the same rigor. Why not get feedback from rural communities about the policies that will affect them before they become codified in the upcoming Farm Bill, summit attendees put forward.

Vilsack echoed that notion. “Build solutions at the source,” he said, quoting a recent Tom Friedman book that argues technology, globalization and climate change are transforming the world so fast that they’ve outstripped institutional capacity to adapt. “Tremendous opportunity,” however, lies in rural communities, he said, if they are provided the tools they need to compete, like broadband.

“What did we do when we electrified rural America? We developed a co-op solution and we put government resources behind it because rural America was important. It’s still important today,” Vilsack said.

That phrase—build solutions at the source—epitomizes cooperation for Doug O’Brien, president and CEO of NCBA CLUSA. The solution to people’s problems, he said, is often within their own communities, and co-ops give them the tools to bring those solutions to life.

“Co-ops have long been the platform for people to come together to make their voice heard, and we’re certainly convinced that they’re part of the answer for those who are looking to help rural people answer some of the challenges they face today,” O’Brien said.

“We share your commitment to innovation for rural communities, so today I would encourage you to think beyond the delivery of resources and focus on the outcome we are trying to achieve and how we can creatively fill in those gaps,” she said.

Hazlett also pointed out that Gina Sheets, Chief Innovation Officer of USDA’s newly-formed Rural Development Innovation Center, was in the audience. Created in November 2017, the center is meant to inform policy decisions and develop creative solutions to spur prosperity in rural America.

Cooperatives can be a big part of that work to revitalize rural America, Vilsack said.

“We need to create opportunities for people to come together in cooperatives that create jobs in local communities so you start building a vibrant local and regional food system,” Vilsack said. In fact, the Farm Bill should really be called the “farm, food and jobs bill,” he said. “This bill is as much about you as it is about farmers.”

By feeding the nation, “rural America provides us is this incredible opportunity to be whoever we want to be,” Vilsack said. “You have to make the case that there’s no better place to invest resources—whether tax dollars, profits or grants—than in rural places.” 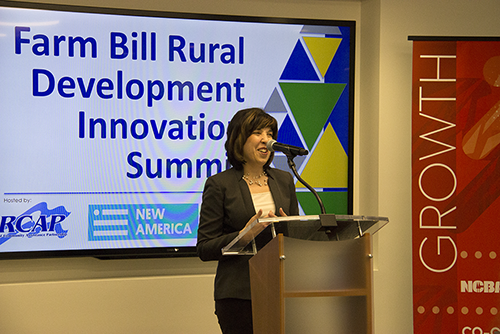