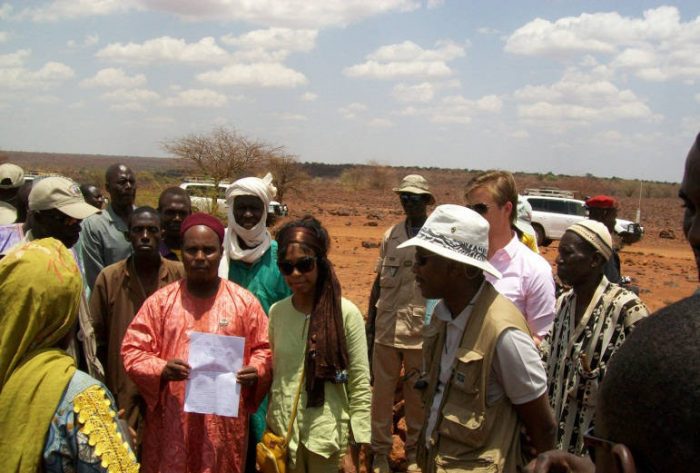 Ambassador Williams spent much of the day praising this technique and the villages partaking in it saying, “I commend the initiative to provide land access to landless women through the ARZIKI project, whereby women can now rehabilitate barren land by building contour stone bunds and produce food for themselves and their families.”

Women of Niger have struggled historically for a right to their own land. This particular success is a two-fold win as bio-degraded land is being rehabilitated while simultaneously providing a space for women to grow crops to feed their families and animals, as well as for income generation.

ARZIKI Chief of Party, Tom Gardiner says of this duel success, “These women are working hard to gain secure and long-term land use tenure documents, and they are tirelessly laboring to make these lands productive once again. By constructing contour stone bunds and digging zai planting pits, they consciously engage in two water harvesting technologies proven to guarantee production of food and cash crops. The men in their villages are seeing the impact of their efforts; some are even copying the technologies on their own farming plots; others are supporting them in their work.”Before concluding her visit, Ambassador Williams said of NCBA CLUSA International’s ARZIKI project, “You are proof of success in Environmental Management. Keep doing it and share your knowledge and skills with others.”Headquartered in Washington, DC, NCBA CLUSA International is a trade and international development organization with programs in 10 countries including Senegal, Niger, Kenya, Mozambique, Namibia, Zimbabwe, Zambia, El Salvador, Indonesia and Timor-Leste providing sustainable community development in agriculture and food security, community based healthcare, democracy and governance, and natural resource management.