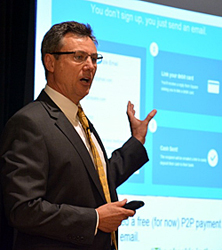 As customers increasingly turn to smartphones or tablets for their banking needs, how will the role of the traditional credit union branch change? The Credit Union National Association (CUNA) explored the possibilities in this recent article:

Like it or not, with consumers able to carry around mobile bank branches on their smartphones and tablets, credit unions, like all financial institutions, are going to have to figure out ways to adapt to the change in the way members receive financial services.

“We’re talking about those who don’t need branches, and do you know who that describes? Everybody here,” said Tim Harrington, president of T.E.A.M. Resources, a credit union consulting firm. “We may want branches, we may like branches, but the fact is we don’t need branches except for a very few things.”

Harrington–during his discussion Thursday at the Credit Union National Association’s 2014 America’s Credit Union Conference, called “Serving Members Who No Longer Need Branches”–described how various financial institutions are trying to get out in front of this evolution.

The image Harrington first painted for attendees was stark–anyone born after 2013 likely will never set foot into a physical branch location, at least according to research compiled by SAP.

But Harrington doesn’t necessarily agree. Instead, he believes that rather than a mass-exodus of branches it’s more likely they will simply feel and operate in much different ways in the future.

With traditional services almost entirely consumed by the capabilities of the digital mobile device, one way branches can evolve, Harrington said, is by offering non-banking-related products that could potentially drive consumers to the physical locations.

Harrington’s first example of a financial institution taking this route was Capital One 360, which has opened up coffee shops that double as bank service centers throughout the United States. Each barista can switch hats and serve up financial guidance, in addition to that 12-ounce cup of coffee consumers may first have come for.

“If you spend time in their branch, chances are you’re going to talk to a customer services representative and you’re going to learn about their products and services,” Harrington said.

This idea is slowly catching on throughout the national and international world of financial services, and in various forms. Credit unions and others are offering coffee, yoga classes, meeting spaces and more in order to drive consumers to their branches, consumers who don’t need the old style of branch any longer and likely wouldn’t have frequented the branch in the first place.

While Harrington said these methods are still largely untested, and not guaranteed to work, they demonstrate how financial institutions have acknowledged the evolution of the branch, and are testing ways to adapt.

Further, even if the methods prove successful, the majority of financial services will continue to be driven by mobile technology, which will still limit a credit union’s ability to sell products through its physical branches.

So, Harrington posed–citing a study that found that financial institutions are making 25% fewer transactions per month than they were five years ago–how do you sell products to members you never see?

By building a relationship with them, and maximizing the time with the member, whenever and wherever contact can be made whether it’s on the Web, through social media, on the phone and even the rare in-person opportunity, he said.