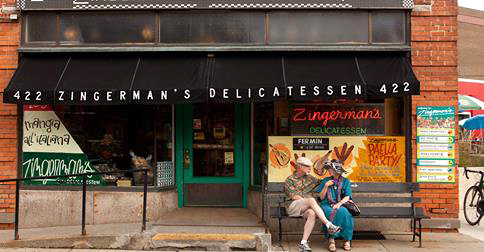 In this opinion piece for Al Jazeera America, Matthew Harwood, senior writer/editor at the ACLU, explains why co-ops are a solution to American economic insecurity, and why the business model should appeal to liberals and conservatives alike:

When American politicians and commentators discuss inequality and poverty, they do so almost exclusively in ways that do little to empower workers. Instead the debates typically focus on what government can do in a top-down fashion to either diminish inequality or discipline the poor.

Take, for example, French economist Thomas Piketty’s best-selling “Capital in the 21st Century” or U.S. Rep. Paul Ryan’s anti-poverty plan. Both offer paternalistic solutions with little to no chance of success. Piketty suggests the absurd and unworkable solution of a global wealth tax, which would be impossible to coordinate among sovereign states controlled by wealthy interests always looking for economic advantage against competitors. Ryan, on the other hand, wants to assign caseworkers to monitor people receiving public assistance, turning government into the expensive nanny state conservatives say they so despise. Despite these obvious shortcomings, such ideas garner the lion’s share of attention in the public discussion on correcting inequality.

Yet there are bottom-up solutions to America’s economic insecurity that have proven records of success. What’s more, they come off as ideologically American, rooted in the idea of working for oneself rather renting oneself out to a boss. The more modest approach is worker ownership, which attempts to blur the distinction between worker and capitalist by sharing the wealth and making antagonistic business relations more harmonious. The more radical and democratic option is direct worker management, which tries to destroy such distinctions and give workers a fuller share of their labor, if not the entire share.

Today forms of worker ownership and worker management are already successfully operating in the U.S. economy, even if their accomplishments are rarely mentioned. In “The Citizen’s Share,” authors Joseph R. Blasi, Richard B. Freeman and Douglas L. Kruse concentrate on companies practicing “shared capitalism,” firms that either share profits with their workers or make ownership shares available in the business. Many companies practicing some form of shared capitalism are household names, such as Google, Procter & Gamble and Southwest Airlines. Shared capitalism is not the sharing economy. Companies that practice shared capitalism don’t merely connect service providers with customers for a percentage of the revenue, such as Uber and Airbnb. Rather they share the wealth of what they generate with the employees who helped produce it.

The most popular way of creating real worker ownership is through employee stock ownership plans (ESOPs), in which firms set up trust funds to make tax-deductible cash or stock contributions for employees; ESOPs can also borrow money to purchase company stock, with firms contributing to repay the loans. The National Center for Employee Ownership (NCEO) estimates that there are approximately 7,000 ESOPs covering about 13.5 million employees. Studies have shown that companies with ESOPs and other forms of profit sharing or ownership stakes grow faster than they would have if they didn’t implement such reforms, mainly through increased worker productivity. Workers also make more money, are more loyal, have more job and retirement security and participate more in how their businesses are run, the authors found.

The more aggressive form of worker ownership is worker cooperatives, which practice some form of workplace democracy — generally one worker, one vote — and share the profits produced. According to the United Federation of Worker Cooperatives, there are approximately 300 such cooperatives in the United States, “employing over 3,500 people and generating $400 million in annual revenues.” They generally exist in labor-intensive industries — such as the service sector — because these businesses don’t need as much start-up capital to succeed. But cooperatives exist as well in professional occupations such as engineering, architecture and computer technology.

A case in point is Cooperative Home Care Associates (CHCA) of the Bronx, New York, by far the most largest and successful worker cooperative in the United States. Providing home health care services, CHCA employs about 2,300 people, primarily African-American and Latina women, 1,100 of whom are worker-owners. In an industry known for poverty wages, CHCA’s workers, represented by the Service Employees International Union, have seen their wages and benefits increase by 40 percent over the past five years. Right now wages stand at $16 an hour. Most impressive is CHCA’s turnover rate, which is 15 percent annually in an industry that averages over 60 percent. Two years ago, the CHCA also successfully became a benefit corporation, pledging that its business model serves its community as much as its bottom line.

New York City has recognized the value and promise of worker cooperatives. In June the City Council passed a budget that invested $1.2 million toward creating them across New York City’s five boroughs. The money is the most a city has ever committed to this business model.

Whatever its form, worker ownership should appeal to both liberals and conservatives for very different reasons. For liberals, worker ownership is a way for workers to increase their earnings while dispersing ownership in companies and possibly inch toward some semblance of economic democracy. For conservatives, worker ownership passes the market test by simply surviving in a competitive economy, with the added benefit of making workers property owners, which instills values of personal responsibility and self-sufficiency. Worker ownership should also appeal to America’s next generation of leaders. As a recent Reason-Rupe poll discovered, millennials can only be described as libertarian socialists, which isn’t an oxymoron. They are libertarian on social issues but strongly support expanding social services.

Yet aside from socialist Sen. Bernie Sanders of Vermont and Republican Rep. David Reichert of Washington, Congress overwhelmingly ignores worker ownership rather than making it an increasing and fundamental part of the U.S. economy. That’s alarming, considering the long history of activism behind such ideas, which stretches back to the nation’s founding.
America was conceived as a nation of small property owners in which public land was distributed broadly to owner-operators to stave off the corruption that deep and widespread economic inequality wrought.

It was this ideal that motivated Thomas Jefferson’s belief in an agrarian society of yeoman farmers and led the United States to pass the Homestead Act, which gave away land west of the Mississippi to families if they established residency on the land for five years and worked it. “Though it was a government program,” write Blasi, Freeman and Kruse, “it was also, in the eyes of many, an anti-government program, moving assets from the government to private ownership.”
Furthermore, there has always been a strong revulsion in American thinking toward wage labor, or renting oneself out to a boss, which was mocked as wage slavery and beneath a freeman.

The only way a true ownership society makes sense today is if individual workers own a slice of the businesses they work for. Businesses today function as the equivalent of land during the 18th and 19th centuries, a way to create wealth and the peace of mind it provides by mixing one’s labor with capital. And if we are to stay true to the ideal of self-sufficient citizens, it also means that workers shouldn’t be bystanders but decision makers with a vote as to how their firms are managed. Workers who quite literally own their own labor and manage their own affairs should be the only ideal for a nation that believes in both liberty and equality.

There’s no reason that a form of voluntary socialism cannot begin in the workplace and exist within a market framework. In many ways, this is where a democratic socialism is most important. Adults spend most of their lives at work yet labor in anti-democratic and hierarchical organizations that run against the grain of the American ideal of self-ownership.

Worker cooperatives and, to a lesser effect, companies with ESOPs show that firms with a libertarian socialist culture can compete and prosper. As the anthropologist and anarchist David Graeber reminds us, there’s an “everyday communism” that pervades even the most competitive businesses, where co-workers work as a team for mutual benefit. Without it, businesses wouldn’t survive if colleagues engaged in cutthroat competition with one another all the time.

Congress, however, isn’t looking for ways to further incentivize worker ownership and management. Instead it engages in crony capitalism, lavishing tax subsidies and bailouts on politically connected corporations that engage in business practices that only exacerbate inequality and corrupt democracy. Rather than continue to rig the economy in the favor of special interests, Congress and state legislatures should reform tax and incorporation codes to favor business organizations that distribute their benefits widely to their employees and favor democratic organization in 21st century versions of the Homestead Act.

Worker ownership and management aren’t cure-alls for America’s cancerous concentrations of wealth and political power. But they are viable ways to organize our economy so that those who do the work receive an increasing share, if not the full product, of their labor. This is a simple and just idea with a long history in the United States. That virtually no one in the halls of power appears to be championing it should tell us something: They don’t trust we the people to manage our own affairs.