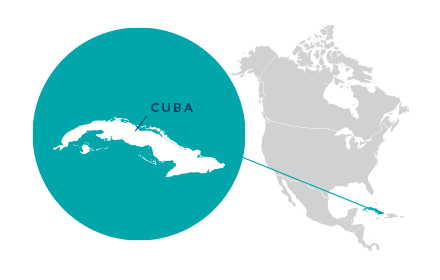 The U.S.–Cuba Cooperative Working Group (USCCWG) is a national-level, multi-sectoral U.S. cooperative leadership group representing consumer, purchasing, worker, and producer cooperatives from a broad range of sectors, such as agriculture, energy, finance, grocery and consumer goods, transportation, insurance, and housing, among others.

The U.S.–Cuba Cooperative Working Group (USCCWG) is a national-level, multi-sectoral U.S. cooperative leadership group representing consumer, purchasing, worker, and producer cooperatives from a broad range of sectors, such as agriculture, energy, finance, grocery and consumer goods, transportation, insurance, and housing, among others.

Led by NCBA CLUSA, in partnership with SOL2 Economics, the USCCWG promotes mutually beneficial engagement between the U.S. and Cuba’s cooperative sectors in an effort to support US cooperative growth and Cuban economic progress that will result from the ongoing success of strong and vibrant cooperatives in both countries.

The Cuba-US working group will continue to: facilitate and coordinate multi-sectoral exchange vists between U.S. and Cuban cooperative leaders; support the international cooperative principles in Cuba through training; engage with Cuban farmers and farming co-ops on improving agricultural productivity; and capture the unique experiences of the Cuban cooperative sector. 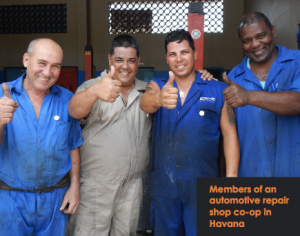 The USCCWG’s first project was a one-week exploratory trip to Cuba in July 2014 to better understand the Cuban cooperative movement, the overall economic situation in Cuba today, U.S.–Cuban relations, the history of Cuban cooperatives, and the increasingly important role that cooperatives are playing in Cuba’s economy.

After this initial trip, a group of Cuban delegates and leaders in the Cuban cooperative sector were invited to participate in U.S. co-op week activities, including meeting with congress and the U.S. State Department to discuss the cooperative experience in Cuba. The delegation also met with local cooperative counterparts in the U.S., and participated in a public dialogue panel at American University’s School of International Service.

As Delegate Luis Dueñas Casal, president of SCENIUS, a financial and economic consulting services cooperative in Cuba, stressed, cooperatives won’t become successful overnight. “The biggest challenge,” Dueñas Casal said, “is to provide workers with training so that the cooperatives can become sustainable.” As his fellow member-owner and SCENIUS General Manager Alfonso Valentín Larrea Barroso, also a delegate, explained, “with the government withdrawing from the management of state-owned businesses and handing over the reins of the newly-formed cooperatives to the members, the workers must now learn how to become member-owners and business managers.” 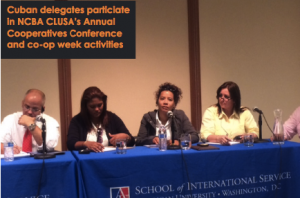 Despite the numerous obstacles to creating a thriving cooperative sector in Cuba, the Cuban panelists agreed that their newfound ownership has translated into tremendous motivation to succeed. As member-owners of their cooperatives, they have the freedom to shape their businesses in ways that benefit the members, they said.

Cooperatives will play a large role in the emerging Cuban economy. The transfer of state-run businesses into cooperatives could result in 20 – 30 percent of Cuba’s workers being actively involved in cooperatives. All state-run restaurants (over 8,000) will be converted to worker owned cooperatives, and by 2017 the Cuban government expects there to be approximately 10,000 cooperatives operating.