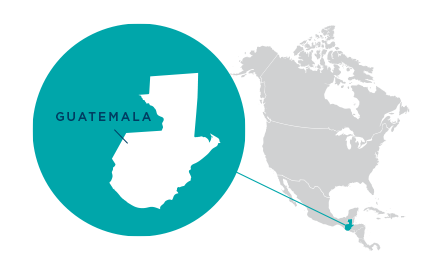 In the Western Highlands of Guatemala, populations are seeing the highest rates of malnutrition in Latin America. Communities in Totonicapán, Huehuetenango, Sololá and Quiché are seeing rates as high as 7 in 10 children suffering from chronic nutrition problems.

In the Western Highlands of Guatemala, populations are seeing the highest rates of malnutrition in Latin America. Communities in Totonicapán, Huehuetenango, Sololá and Quiché are seeing rates as high as 7 in 10 children suffering from chronic nutrition problems.

In order to promote quality and diversity in the family diet, particularly for infants and mothers, NCBA CLUSA, along with local partners AGEXPORT, Anacafe and the FANTA Project, trains families in chicken production, along with village savings programs to encourage income generation and increased protein intake.

Tania Melissa de León Hernandes has more letters in her name than her age. Even so, her Guatemalan community in Quiché trusted and nominated her to be trained in chicken coop care and vaccinations, bringing nutrition training and income to 19 families in her town.

As a nutrition promoter, Tania learned about protein and other nutrition needs through the Cooperative Development Program NCBA CLUSA runs in Guatemala. In the region where Tania lives, NCBA CLUSA partnered with Anacafe (the national coffee association in Guatemala) and the U.S. Agency for International Development (USAID) to help identify families looking for ways to increase their protein intake and support each other.

Through promoters like Tania, the families are trained to raise chickens and use the eggs as a protein source. Many families also have extra eggs to sell.

“The demand for fresh eggs went up in the community after the training and after we put up a sign telling people we were selling fresh eggs,” Tania said.

Families outside the original group are also buying the fresh eggs, increasing protein access for the whole community.

The families started building chicken coops with support from Tania. Trained on how to manage the structures to keep the chickens healthy, she also supplies vaccinations and trains people on how to use the chicken fertilizer to keep their garden soil healthy.

Selling the chicken compost was a small source of income that helped offset chicken feed and other costs.

While Tania knew these trainings were important, the information really sunk in when she got married and had her first child. At the time when she was nominated by her community, she was still single. Now in her early twenties, she is putting all this training to use with her own family.

“I had never worked with a group before,” Tania said. “I have learned a lot of patience, a lot about nutrition and I’m using this knowledge with my own baby. I see a difference with my baby. She’s fatter and bigger than the others.”

Working with her neighbors—many of whom also have young children—it was clear the eggs and nutrition trainings made a difference. Techniques like exclusive breastfeeding for three months to ensure a child does not have infected water in their diet, also helped keep her baby strong.