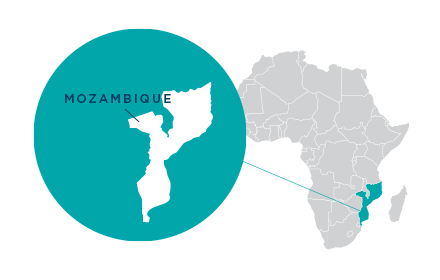 The project is a response to the catastrophic effect of Cyclone Idai, which made landfall 2019 in Mozambique and damaged more than 700,000 hectares of agricultural land across the country causing widespread devastation to the agricultural sector. The targeted intervention areas of the SEEDS+ project in Manica and Zambézia provinces were severely affected by the cyclone.

The SEEDS+ project is designed to promote the development of effective and sustainable markets for index-based weather insurance. The project will test tools and mechanisms that will make it technically and financially possible to extend insurance to smallholder clients- a market usually excluded from traditional insurance products. The project will support the local seed company, Phoenix Seeds, to take certified seed sales to a new level by partnering with Hollard Insurance to become the first Mozambican seed company to automatically include weather index insurance in all of its products, at no extra price to the consumer.

Phoenix will make insured seed available through its agrodealer network in Manica and Zambézia provinces in central and northern Mozambique, respectively. Any farmer who buys Phoenix seed and experiences crop failure due to flood or drought will be able to reclaim replacement seed at no additional cost, either for that same growing season or the next season. The ability to obtain and re-sow replacement seed will not only increase smallholders’ resiliency to extreme climate events (like cyclones Idai and Kenneth, which devastated much of central and northern Mozambique in 2019), but will also stimulate the smallholder market by encouraging farmers to test certified seed for the first time.

2) Assist Phoenix Seeds in integrating SMS messaging and marketing activities into its business model and invest in these strategies to raise awareness of the benefits of insured seeds and increase sales.