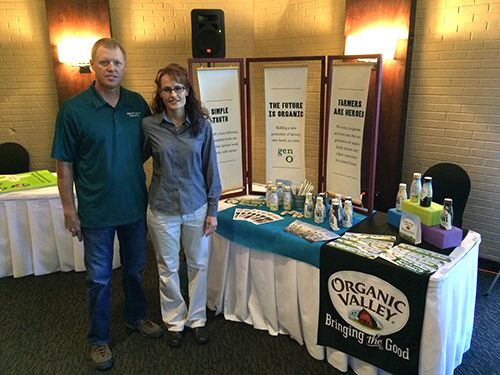 Unstable markets, financial stresses and environmental challenges like climate change make conventional farming a risky business in the U.S. and worldwide, Bingham said. In 2006, he made the switch to organic farming and joined Organic Valley, a farmer-owned cooperative founded in 1988 and a Bronze Sponsor of the 2015 CCMA Conference. Organic Valley is now the largest organic farmer-owned cooperative in North America, and Bingham has seen firsthand the key to their success—putting the farmer first.

Today, Bingham’s land is much healthier. His soil is full of earthworms, a sign that it’s rich in nutrients. Not only is Bingham’s land healthier, so are his cows. And they’re happier, too, he said. “They know when it’s time for them to go grazing. They wait at the gates chomping at the bit.”

Thanks to Organic Valley, Bingham no longer has to worry about his pay because it’s not determined by what he can make on an unpredictable market. The cooperative sets the prices, and it will not undercut the farmers. Organic Valley works hard to control production as well so that the market does not become oversaturated. The farmers are at the center of every decision the cooperative makes.

“At Organic Valley, the family farm is the focal point. I’ve had two younger brothers come back because we could finally afford to have them work on the farm. It’s been a great blessing,” Bingham said.