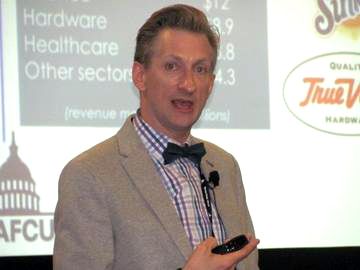 Credit unions were urged to develop closer relationships with other cooperatives, although—as discussion made clear—many credit unions know little about their fellow co-ops.

During a session at NAFCU’s Annual Conference, NCBA CLUSA Director of Membership Thomas Bowen acknowledged that during the 20 years he spent working at a credit union, “I’m embarrassed to say, I didn’t know we were a cooperative. We didn’t talk about it.”

But there are numerous reasons to talk about it today, Bowen said, beyond just the bottom-line benefits for both credit unions and the broader cooperative community.

“Co-ops are very trendy right now,” Bowen said. “Millennials love the idea of a shared economy. Uber, for example, or Airbnb. Taking advantage of that cooperative tab is something we should all be looking at.”

Bowen pointed to the 7 Cooperative Principles, especially Number 6, or “cooperation among cooperatives,” as an opportunity NCBA CLUSA is building upon. But first, there are some hurdles to cooperative development.

“Not all 50 states have laws in place that protect cooperative businesses,” Bowen said. “Credit unions and rural electric co-ops do because they are regulated. One of NCBA CLUSA’s goals in the year ahead is to review the 50 states and their laws. If the laws do exist, they are ancient.”

For those unaware of the extent of cooperatives in the U.S.—and many in his audience were not—Bowen ran through the numbers: There are an estimated 40,000 co-ops in the U.S., representing 2 million jobs, generating $652 million in annual sales and $3 trillion in total assets. Well-known corporate brands that are actually cooperatives include Nationwide Insurance, Ace Hardware, True Value, Sunkist, Ocean Spray and REI.

But the numbers and the well-known brands did not impress everyone in his audience. One person asked Bowen, “Yes, but how does joining a cooperative actually help us?”

Bowen noted that in half of the co-ops he visits, half look to a bank rather than a credit union for their financial needs. “I have seen many co-ops with ATMs in their stores, but they are not credit union ATMs,” he said.

Citing a study NCBA CLUSA conducted in conjunction with the Filene Research Institute, “Cooperation Among Cooperatives,” Bowen said researchers concluded that there is a potential for up to $346 billion from cooperative businesses that is currently going somewhere other than credit unions.

Bowen added that credit unions should look to the local Cooperative Business Associations that NCBA CLUSA is pioneering—essentially chambers of commerce for cooperative businesses, beginning in Austin, and now expanding into Philadelphia. Other strong markets for cooperatives, he said, include Chicago, the Seattle/Portland area and Western Massachusetts.

Can you name your local co-ops?

“Do you know the co-ops in your area?,” Bowen asked the audience. “There was a woman in the last session who said she lived in Buffalo, New York, where she said they have no co-ops. So I went down the list and gave her a number of companies in Buffalo that are co-ops.”

Bowen also encouraged credit unions to look to “Operation Connect,” a partnership now in its pilot stage between rural electric co-ops and credit unions located in the same geographical area. Under the program, electric co-ops turn over their list of delinquent accounts to the respective credit union, which then offers financial literacy counseling and potential credit union membership.