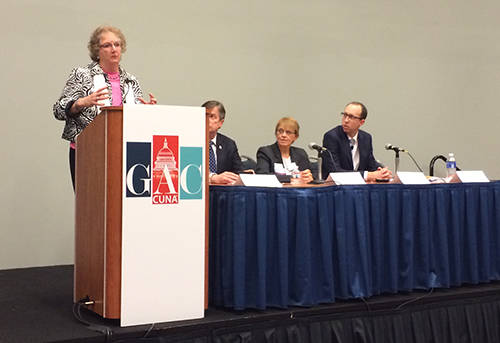 Funded by a grant from the National Credit Union Foundation and conducted by the Filene Research Institute, the report, “Cooperation Among Cooperatives: Quantifying the Business Case for Credit Unions and Other Cooperatives,” is the development of a partnership between CUNA, the Foundation, NCBA CLUSA and Filene.

While many credit unions tend to overlook non-financial cooperatives as a “small slice” of the economy, Rogers said, co-ops were actually the fastest-growing sector of the economy between 2009 and 2014, growing by almost a third, outpacing both interest rates and average GDP growth and representing a “tremendous business opportunity” for credit unions. Cooperative groceries alone grew by a stunning 80 percent in the past five years, Rogers added.

During a Q&A session led by Cooperative Alliance Committee member and NCBA CLUSA COO Pat Sterner, audience members shared examples of collaboration between credit unions and co-ops, as well as barriers to Principle 6, or “cooperation among cooperatives.”

“In the regular world of business lending, [requiring a personal guarantee] makes a lot of sense, because it’s one more way to mitigate risk, but when it comes to the legal structure of a co-op, who’s going to make the personal guarantee?” Rogers said. Black Star has 3,300 member-owners and 19 employee-owners.

When he interviewed Black Star co-founder and business team leader Dana Curtis for the Filene report, Rogers said she expressed a keen interest in cooperation among co-ops.

“[Curtis] would love to work more closely with credit unions, but she finds that philosophically, even when people are speaking the same language, when that bubbles down to policies and operations, there’s a disconnect,” he said.

As NCBA CLUSA CEO and president Mike Beall put it, “Some credit unions are oblivious to these obstacles, and some co-ops are skeptical of credit unions and see them as too similar to traditional banks.”

Conversations within the National Credit Union Administration and other regulatory bodies indicate momentum to change the requirements of business lending to co-ops, Rogers said. “The agency recognizes the need to get this fixed.”

NCBA CLUSA is uniquely positioned to help propel more mutually beneficial relationships between credit unions and non-financial co-ops, Sterner said. “As a convener of these cross-sector relationships, driving co-op to co-op business is a key element of NCBA CLUSA’s domestic agenda,” she said.

When Beall meets with CUNA representatives next week, the group is expected to discuss how best to remove obstacles surrounding the financing of co-ops by credit unions. The groups will also outline a memorandum of understanding to establish parameters for future collaboration, Beall said.

Beall sees similar MOUs as a way for NCBA CLUSA to help drive measurable growth within each cooperative sector, not just credit unions.

“We would like these MOUs to help frame plans of action between NCBA CLUSA and all the national associations we work with,” Beall said. “What are they looking to accomplish, and how do we help achieve that with them? Let’s sit down, decide on some goals and then track our progress.”

According to the Filene report, non-financial cooperatives in the U.S. now boast about $75 billion in investable assets, such as deposits and securities. If co-ops shifted just half of those deposits (about $37.5 billion) from commercial banks to credit unions, the report indicates, they would earn $2.2 billion more in interest over a 10-year period. Meanwhile, credit union deposits would grow from $939 billion to $977 billion, or 4 percent. Co-ops also owe about $100 billion in loans that could be refinanced at significantly better rates with credit unions.

Many credit unions would benefit from upending their attitude toward non-financial co-ops, said Mark Cummins, president and CEO of the Minnesota Credit Union Network and chair of the CUNA Cooperative Alliance Committee.

The CUNA Cooperative Alliance Committee behind the Filene report can serve as a model for future cross-sector work, Beall said. With a membership of 11 credit union CEOs, two league staff and three individuals who work for cross-sector cooperative organizations, the committee takes into account a wide spectrum of ideas and priorities—something there’s a “broader need” for going forward, Beall said.