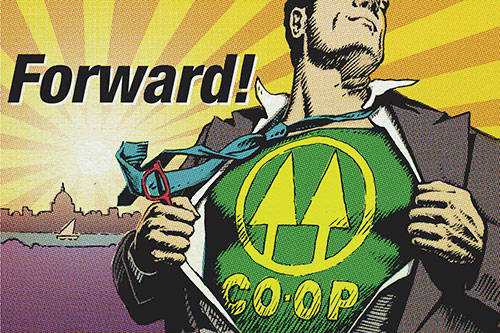 NCBA CLUSA is gearing up for the 58th Consumer Cooperative Management Association Conference (CCMA) in Madison, Wisconsin next week.

The annual conference unites leaders from the consumer co-op sector to network and share best practices while they work to improve operations, governance, consumer education and marketing strategies.

This year, CCMA will convene under the Wisconsin state motto, “Forward!”

The Willy Street Food Co-op is joining the University of Wisconsin Urban Cooperative Initiative and NCBA CLUSA to sponsor the three-day event, with more than 500 veteran and newcomer food co-op managers, staff, directors and consultants to Madison. The vibrant college town boasts more cafes, brewpubs and restaurants per capita than anywhere else in the U.S. And the fine Wisconsin cheese speaks for itself.

CCMA promises a great lineup of workshops and panels. Keynote speakers include:

CCMA workshops are slated to cover topics such as leadership development, community impact, food security and access, skills for strategic thinking and proven methods for co-op growth and expansion. Attendees will see Principle 6 in action, learn how to manage stores effectively and build strong governance. A primer on start-ups and new co-ops is also on the docket.

Conference attendees are invited to join in several tours of retail locations, food stops and community spaces, including a walking tour of the legendary Willy Street. An exhibit hall at CCMA will showcase the innovative ways co-ops are impacting and uniting their communities. Stop by the NCBA CLUSA booth to try your hand at the 15-second interview!

To cap off the conference, the Willy Street Food Co-op will host a celebration at the Madison Children’s Museum. Look for food stations catered by local favorite Eldorado Grill throughout the museum, and listen to performances by the Currach Trio and other Madison musicians.

Sponsored by NCBA CLUSA, CCMA began in 1956 as a weekend retreat for consumer co-op managers representing grocery co-ops established in the 1930s and 40s, along with major cooperatives in other sectors, such as Nationwide Insurance and recreation gear retailer REI. In the 1970s, a new wave of consumer food co-ops helped grow CCMA.

Since 1990, Ann Hoyt and the University of Wisconsin have overseen CCMA planning. Management will transition to NCBA CLUSA in 2015.