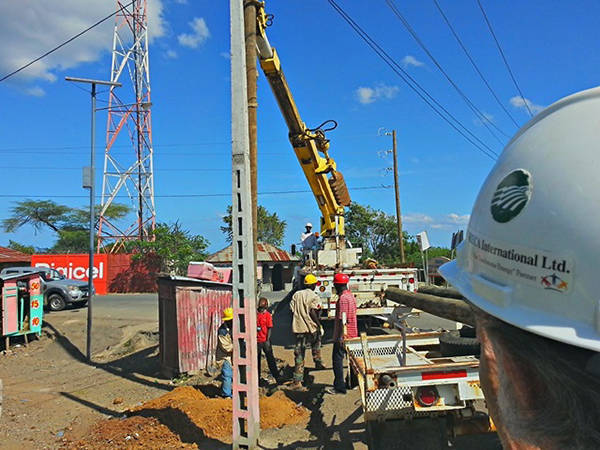 (NRECA) International’s efforts to electrify some of the most impoverished places on earth received a six-figure boost this week when CoBank made the largest single donation to the NRECA International Foundation—a $250,000 donation supporting projects in Africa, Central America and Latin America.

“Electrification is one of the most critical steps on the path to sustainable economic growth for emerging economies, and it is a privilege to partner with NRECA International in this important work,” said Robert B. Engel, CoBank CEO.

Engel added that bringing power to underdeveloped nations today is “doing the same thing for those communities that it did for rural America in the last century.”

The gift was announced February 23 at the NRECA Annual Meeting’s International Lunch, where Myk Manon, NRECA Haiti country director, said the work being done there is crucial.

“The first time a light goes on in a house—it’s incredible the way people view this,” said Manon, who has spent four decades working to get the lights turned on for many impoverished communities.

But there are other benefits. Manon told how electricity enabled a small water purification company to open.

“There’s also a health impact,” Manon said, explaining that there’s been a reduction in diseases as people no longer have to drink unsanitary water.

“Each one of you here today can play a part in our dream that begins with power, but results in education, improved health, economic opportunity, and safety for women and kids in rural areas throughout the world,” said Breslaw.

“Since our last event a year ago, nearly 100 donors have signed on with personal pledges and gifts of $1,000 or greater to allow NRECA International the ability to work where it knows it can make a meaningful difference.”