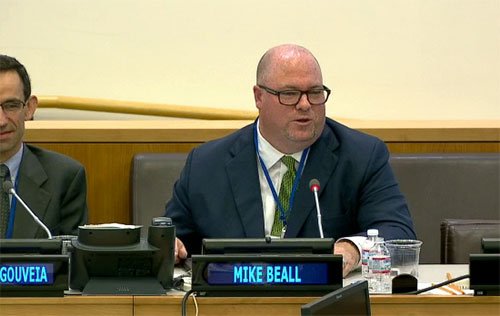 Panelists representing the cooperative sector made the case at United Nation’s headquarters last week for the international development community to embrace cooperatives as partners.

The panel discussion on the impact of cooperative development on sustainability fell during the week the international community celebrated the 20th annual International Day of Cooperatives, observed this year on July 7.

The UN has actively sought the inclusion of cooperatives since it named 2012 the International Year of Cooperatives. “Cooperatives are a reminder to the international community that it is possible to pursue both economic viability and social responsibility,” UN Secretary General Ban Ki-moon said during observations that year.

Panelist Wenyan Yang, chief of the Social Perspective on Development branch of the Division for Social Policy and Development (DSPD) in the UN’s Department of Economic and Social Affairs (DESA), said the UN remains “in a unique position to establish global standards and policy guidance that create an enabling environment to promote the development of cooperatives.”

“The Global Census on Cooperatives,” a 2013 survey conducted by the UN’s Department of Economic and Social Affairs, revealed that New Zealand, France and Switzerland enjoy the world’s three most cooperative economies, while agriculture—with 1.2 million co-ops worldwide—comprises the largest sector within the cooperative sphere. Banking and credit unions serve the most members worldwide, and grocery and consumer co-ops hold the most total assets. By region, Asia boasts the most coops—2 million—while Europe, with close to half a million, is the runner-up.

Still, Yang said, there is a continuing need to provide comprehensive, current data on co-ops and fill persistent gaps. When policymakers have a more complete picture of the scope and influence of the cooperative movement worldwide, they are more likely to help create an enabling environment for co-ops to operate, she added.

“We count on your cooperation and support to improve the quality and quantity of our data,” she said.

Cooperative leaders, for their part, would like to see specific language on the role of co-ops added to the UN’s post-2015 Sustainable Development Goals (SDGs) before they are finalized by the 69th Regular Session of the General Assembly in September. The current draft does not mention co-ops.

Rodrigo Gouveia, director of Policy for the International Co-operative Alliance, said his organization—with whom NCBA CLUSA works closely—has identified three sections where co-ops could be inserted into the draft: food security, employment and access to credit.

“Co-ops are an ideal way to implement the goals we want to achieve, but they must be recognized as such. Partnerships, support and recognition by the UN and other global bodies are crucial to maximize their potential,” Gouveia said.

“Cooperatives are an old idea, but one that is more relevant than ever, if we look ahead to the development challenges and opportunities the world faces in the coming decades,” Pinheiro said.

“Nobody is really asking, ‘How are we going to deliver on these [sustainable development] goals? What are the accountability mechanisms?’” he said. “The answer to this question has to be clear; otherwise, we’re just making promises without making clear means of implementation, clear means to deliver. And that’s where I think cooperatives can play a major role. Cooperatives are a means of implementation.”

Beall highlighted several NCBA CLUSA projects to illustrate cooperative enterprise in action. In Senegal, the nutrition-led and conservation agriculture project Yaajeende is reducing hunger and increasing crop yields. The Yes Youth Can! Project in Kenya grooms thousands of disadvantaged young people for future employment, entrepreneurship and community leadership. With an estimated 70 percent of the population of the continent of Africa under the age of 30, young people are a key demographic to engage in sustainable development. The project has already seen close to 40,000 youth elected to leadership positions both locally and nationally.

Beall’s final example, the Delta Regional Market poverty alleviation project in Marks, Mississippi, is combating “food desert” syndrome. Much of the countryside in the Delta region was sold off decades ago, making it difficult to find fresh, affordable fruits and vegetables “in the middle of some of the most rich farmland in the U.S.,” he said. Now, through job creation, business development and an emphasis on locally-grown products, the region is moving toward economic stability.

Maxwell Haywood, Focal Point on Cooperatives for the Social Perspectives in Development branch of the DSPD/DESA, said Beall’s insight on the cooperative sector “helps strengthen the process of promoting the growth and development of cooperatives in the context of sustainable development.”

“The work you do is very close to the work that we are doing at the UN. This is grounds for a constructive partnership,” Haywood said.

The cooperative business model’s ability to achieve resilience in the local community both nationally and internationally was a key theme throughout the panel discussion.

In her presentation, Elizabeth Phillipe, manager of Corporate Communications for the United Nations Federal Credit Union, said financial co-ops, having weathered the economic downturn, are “resilient engines of positive growth.” Credit unions also play a “unique role” in education, she said, bringing financial literacy to the table and engaging students from an early age to understand the basics of sound financial management.

Ed Potter, executive director of the International Cooperative and Mutual Insurance Federation in the Americas, explained how the cooperative and mutual insurance sector boosts economic stability by responding to local needs and providing an affordable, accessible and easy to understand option.

The cooperative sector itself is a testament to the viability of the business model, Potter said. There are more than 500 cooperatives that are older than 100 years old, he said.

“If that’s not sustainability, I don’t know what is,” he added.