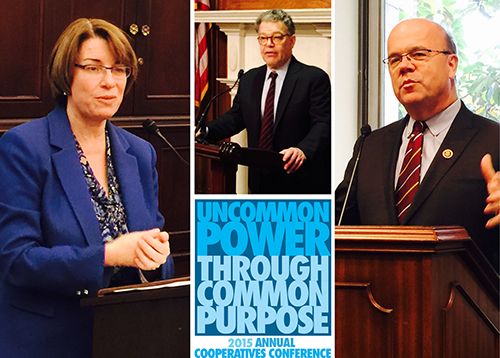 Co-ops “build and sustain” the middle class and “spur economic growth” in a nation where “too many businesses are driven by short-term profit instead of long-term investment in communities,” Senator Al Franken (D-Minn.) said during a breakfast presentation on May 5 in the U.S. Capitol, during NCBA CLUSA’s first advocacy conference.

Senator Franken was one of several Congress members who expressed strong support for co-ops at NCBA CLUSA’s Annual Cooperatives Conference in Washington, D.C., from May 4 – 6.

During his remarks, Franken focused on income inequality and how co-ops can help working families achieve financial stability—a situation he called a “dream for too many Americans.”

Franken’s home state boasts the largest number of co-ops in the U.S., 3.5 million member-owners and three Fortune 500 co-ops, including Land O’Lakes and CHS, Inc. The success of Minnesotan cooperatives, and co-ops across the U.S., he said, is a “testament to the truly cooperative values” that drive the co-op business model, providing vital services, creating stable jobs and building strong communities, including those in rural, underserved areas.

During a May 5 lunch presentation, Representative Jim McGovern (D-Mass.) applauded NCBA CLUSA for its focus on bettering the lives of Salvadorians, Cubans and others worldwide. He said the U.S. Government is not always good about rebuilding countries post-war, but organizations like NCBA CLUSA that put smallholder farmers at the core of sustainable development are on the frontlines of that important work.

Representative McGovern—whom NCBA CLUSA President and CEO Mike Beall called “a great friend of cooperatives”—was also present at the November 2014 launch of NCBA CLUSA’s coffee rehabilitation project in El Salvador, and has been a longtime advocate of lifting the embargo on trade with Cuba and pursuing a more “mature and productive relationship” with that country.

“The cooperative movement in Cuba gives me great hope for the future of Cuba’s economy,” McGovern said, adding that NCBA CLUSA’s role in supporting the country’s emerging private sector is “essential.”

McGovern also spoke broadly on cooperatives in the U.S. “I’ve always been a big supporter of the cooperative movement, largely because of its focus on people and communities, whether it’s banking, housing or food,” he said.

In fact, McGovern added, much of the recent financial crisis can be traced back to a widening gap between the interests of massive corporations and local communities.

McGovern also touched on the need for bipartisanship. “You may not agree on everything, but find something to agree on and work together.” If cooperative development becomes a point of compromise for lawmakers, he said, the issue could become “the poster child for what functioning government looks like.”

During a reception at the U.S. Capitol Building that evening, Senator Amy Klobuchar (D-Minn.) echoed McGovern’s call for bipartisanship. “Cooperative issues are really bipartisan issues,” Klobuchar said, adding that she will continue to work with her colleagues in the Senate to create, submit and pass cooperative-friendly legislation.