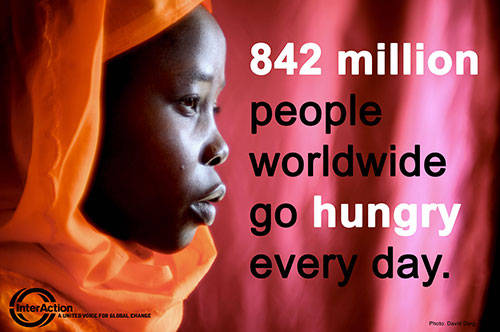 According to the statement, 842 million people are hungry worldwide, with malnutrition behind approximately half of all deaths of children under the age of five. Hunger and malnutrition stand between people and “healthy, productive lives,” and are directly linked to stunting the mental, as well as physical development of “future generations,” the statement says.

In recent years, the U.S. government has made strides in renewing its efforts to end hunger. Its global hunger and food security initiative, Feed the Future, has improved nutrition for more than 12.5 million children and equipped close to 7 million farmers and producers with new technologies and management practices.

Still, InterAction, its NGO members and supporting organizations would like to see even more resources enlisted in the fight.

“We strongly urge Congress to introduce bipartisan legislation this September, and we pledge to work with Congress and the administration to support passage of legislation that will ensure continued U.S. leadership on global food and nutrition security and poverty reduction,” the statement says.

The statement also outlines specific targets of such legislation. Legislation should:

• Include the development and implementation of a comprehensive, whole-of-government strategy to combat hunger and malnutrition in developing countries
• Support country ownership and emphasize the key role of small-scale producers and local food economies
• Prioritize sustainable agricultural development that improves nutrition, gender equality and female empowerment; builds resilience and safety nets for the most vulnerable food-insecure populations; and supports environmental protection, capacity building, research and civil society engagements
• Improve upon the existing monitoring and evaluation practices to ensure U.S. taxpayer investments are implemented transparently, efficiently and effectively

The statement follows a pledge earlier this year by 33 InterAction members to put a collective $1.5 billion in unrestricted funds toward advancing food security, nutrition and resiliency through 2015.

The statement will be highlighted today at the U.S.-African Leaders Summit in Washington, D.C., during a presentation called “Resilience and Food Security in a Changing Climate.”

—Click here to read the full statement and see the signatories.