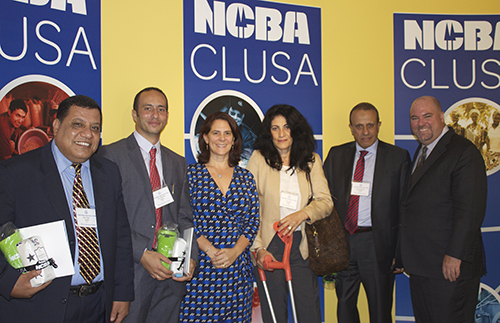 In what marked the first official cooperative-to-cooperative visit between the United States and Egypt, representatives from Egyptian agricultural associations met with NCBA CLUSA officials last week at the organization’s headquarters in Washington, D.C.

The visit continues a trend toward greater collaboration between the global cooperative community and the U.S. as a leader in the cooperative development sphere. NCBA CLUSA has previously met with similar delegations from Puerto Rico, Brazil, Israel, Turkey, China and Romania. NCBA CLUSA will host a group from India at the end of the month.

“We are always excited to learn from others within the co-op community, and we hope that NCBA CLUSA will continue to be a touch point for international delegations interested in learning more about the cooperative business model,” said Mike Beall, president and CEO of NCBA CLUSA. Beall offered a welcome and overview of the cooperative sector in the U.S. to the Egyptian delegation.

Co-ops comprise an increasingly significant part of the U.S. economy, Beall told the group. Currently, he said, there are an estimated 40,000 co-ops in the U.S. generating $3 trillion in assets. One out of three Americans belongs to a co-op, and more than 100 million Americans are credit union members, he added.

The Egyptian delegation was curious about the challenges national-level co-op associations in the U.S. face when balancing competing political interests, and how NCBA CLUSA convenes all sectors on issues critical to all co-ops, such as advocacy and education.

According to the International Labor Organization (ILO), Egypt’s cooperative sector is currently undergoing reforms to better protect member control. There are currently an estimated 7,000 cooperatives in the country with a total membership of around 5 million. Egypt’s new constitution includes a commitment to support the cooperative sector, an ILO report said.

The Egyptian delegation’s August 5 visit to NCBA CLUSA took place with support from the U.S. State Department’s International Visitor Leadership Program. This program has provided an opportunity for the delegation to learn how co-ops across sectors operate in the U.S. and how American associations influence decision-makers to spur sound policy at national and state levels.

During their visit, the delegation expressed particular interest in NCBA CLUSA’s international development work, shared by Amy Coughenhour, COO for NCBA CLUSA’s international program. That work represents more than 60 years of projects in food security and nutrition, national resource management, sustainable agriculture and community-based health. What began in 1916 with agricultural co-ops in India is now an international development organization implementing a $217 million project profile in 18 countries.

“We’re very proud to share with the international delegations the work we’re doing around the world to advance the capacity of smallholder farmers, cooperative businesses and community groups to increase incomes and build resilience within their families and communities,” Coughenhour said.

While NCBA CLUSA is not currently active in Egypt, in 1993 the organization launched the Small and Micro Enterprise Credit Project there. The decade-long project lent more than $566 million to low-income clients and small businesses with a 99+ percent repayment rate. A critical facet of the program was a poverty-lending program to help female heads of household in urban settlements start or expand income-generating activities using a group lending method.

At the close of the project in 2004, 98 branches of Egypt’s nationwide Banque du Caire had initiated micro-lending. By the project’s wrap, some 95,000 loans worth $50 million had been made to more than 300,000 people, 51 percent of whom were women—a 100 percent increase in female clients.