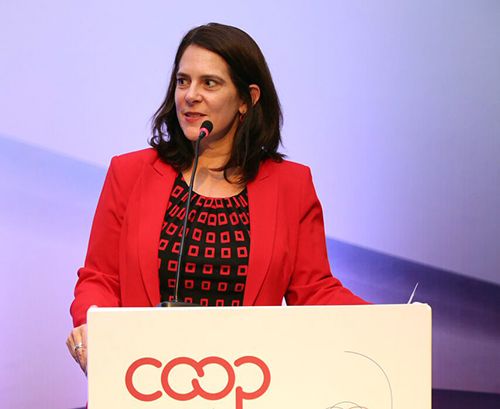 Amy Coughenour, COO of International Programs for NCBA CLUSA, spoke both to the role of women in food security for the Gender Committee, as well as on a panel on the role of co-ops in addressing the Sustainable Development Goals (SDGs).

Alan Knapp, NCBA CLUSA’s Vice President of Advocacy, shared best practices in advocating for a favorable legal environment for co-ops, including NCBA CLUSA’s role in establishing platforms on the federal level such as the Interagency Working Group on Cooperatives in partnership with the United States Department of Agriculture. The coordination of cooperative initiatives at the government level helps to forward the co-op model across industries.

“Representation and advocacy are essential to create a political environment in which cooperatives can thrive,” Knapp said during his presentation on legal frameworks at the conference. “While cooperative sectors are all inherently different and represent different sectors of the economy, we come together to promote the cooperative business model as a viable market solution and business option that can help solve a number of today’s policy challenges.” 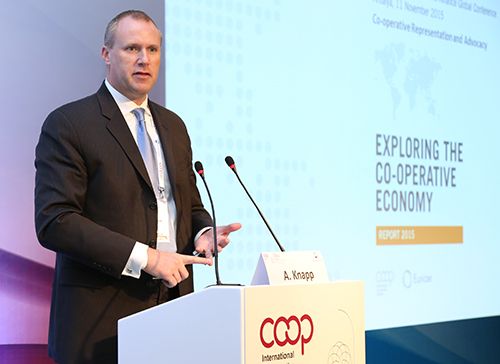 Some of those policy challenges include the new global mandate of the Sustainable Development Goals. Cooperatives, including the more than 40,000 in the U.S. alone, that NCBA CLUSA represents to Congress, are some of the best vehicles for achieving the SDGs around the world.

“Cooperatives can be some of the best partners for tackling the SDGs,” Coughenour said on a panel discussing cross-sector partnerships. “Co-ops add value across industries in bringing farmers and producers to markets, and providing a structure for communities to advance their own development.”

Much of NCBA CLUSA’s work abroad focuses on tackling SDG #2—End Hunger, Achieve Food Security, Nutrition and Sustainable Agriculture—where co-ops are a sustainable vehicle for development. But co-ops in the U.S. and abroad can easily partner with communities and governments to affect many of the SDGs. From governance and equality to economic development and sustainability, co-ops are using their concern for community to fuel important initiatives, such as the sustainability efforts outlined by Robyn Shrader, CEO of NCBA CLUSA Member National Co+op Grocers.

As part of the conference, ICA members were asked to make specific commitments to one or more of the SDGs over the next year, including aligning priorities on the SDGs for the 2016 International Day of Co-operatives, which will be held on July 2, 2016.

Held every two years, more than 2,000 people attend the ICA Global Conference and General Assembly, which meets over four days to discuss best practices from cooperatives around the world and vote for a two-year term ICA President. For 2015 – 2017, the General Assembly voted in Desjardins Group CEO Monique Leroux as president of the ICA. This year’s theme, Towards 2020, focused on implementing the Blueprint for a Cooperative Decade’s vision of having co-ops be leaders in sustainable business by 2020.