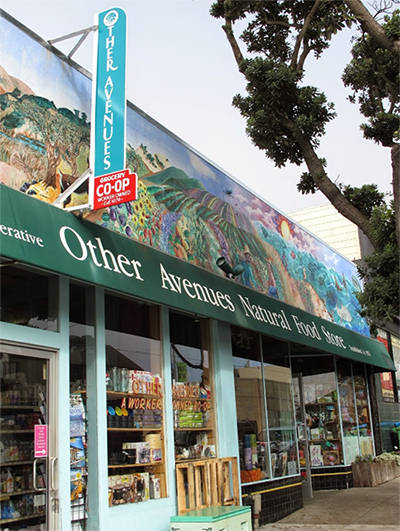 Worker-owned cooperative grocer Other Avenues, located in San Francisco’s Outer Sunset neighborhood, is taking its commitment to sustainability to the next level with a solar energy system expected to save them hundreds of thousands of dollars in electricity costs. According to this story published by stories.coop, a partnership with the innovative nonprofit RE-volv is financing the project:

For 40 years, a worker-owned cooperative grocery store called Other Avenues has been serving the Outer Sunset community with local, organic foods and sustainable lifestyle products. For eight years, Other Avenues has been looking to go solar but has had a hard time finding the financing. Now they’ve partnered with nonprofit RE-volv to finance their project using a unique community-funded model.

Going solar has been a long-held dream for Other Avenues. “I’ve been working on this project for eight years, and it’s been difficult to find the right fit for financing this solar project,” said Other Avenues President Darryl Dea. “So when RE-volv came around it was a perfect fit for us because not only do they work with nonprofits and co-ops, but we’re able to contribute to this fund, which will further create more solar projects.”

By going solar, Other Avenues is taking the next step in its commitment to sustainability. Over the life of the solar energy system, Other Avenues will avoid emitting more than 600,000 pounds of carbon, the equivalent of planting 100 acres of trees. Going solar will also save Other Avenues $335,000 in avoided electricity costs over the next 25 years.

The partnership between RE-volv and Other Avenues demonstrates the power of communities in tackling climate change. When 400,000 people marched in New York against climate change in September 2014, they demanded solutions. By crowdfunding for solar, RE-volv gives everyone the opportunity to help drive climate solutions by supporting a revolving fund for clean energy in communities. Even if a community member can’t go solar at home, they can pitch in to help organizations in their communities go solar.

“Other Avenues has been serving its community for forty years and has developed a tight-knit community of supporters. We’re thrilled to be offering this community a way to take action on climate change and at the same time help their neighborhood grocery co-op,” said RE-volv Executive Director Andreas Karelas.