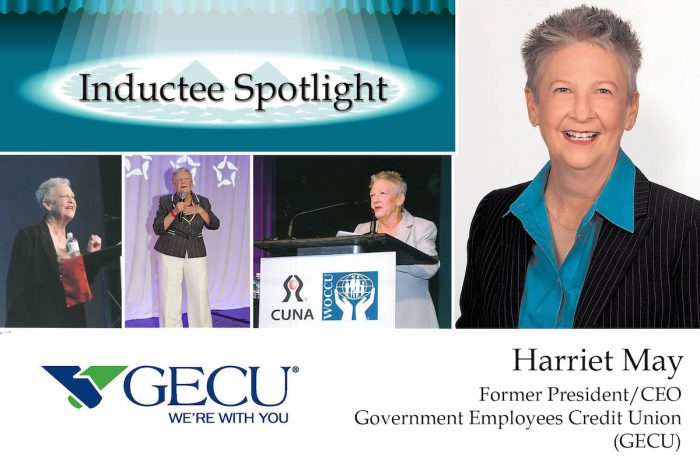 As CEO of the Government Employees Credit Union, Harriet May understood the power of credit unions to improve the lives of low income and minority members of her El Paso, Texas community.

Harriet May began her career as a teller and rose to become the CEO of GECU – the largest locally owned financial institution in El Paso, Texas. She has been a cooperative leader at the state, national, and international levels. May led efforts to make home ownership more widely available by helping to establish an Affordable Housing Credit Union Service Organization. The CUSO’s results have been dramatic, impacting the lives of thousands in her community. She was an innovator in the area of financial literacy, even participating in a panel discussion with the President of the United States, and she worked across the border with Mexican officials in order to put in place a system of affordable remittance services. The Credit Union National Association (CUNA) has looked to May to valiantly defend the tax status of the U.S. credit union movement.

The Cooperative Development Foundation (CDF), the 501(c)(3) non-profit affiliate of the National Cooperative Business Association (NCBA CLUSA) administers the Cooperative Hall of Fame. Nominations are received annually from throughout the cooperative community, with the final selection made by the NCBA Board of Directors on the recommendations of a selection committee of national cooperative leaders. The Cooperative Hall of Fame gallery is on display in NCBA’s offices in Washington, DC and it also can be visited on the web at www.heroes.coop. For dinner attendance or sponsorship information, contact CDF at 202-383-5445 or cdurand@cdf.coop.