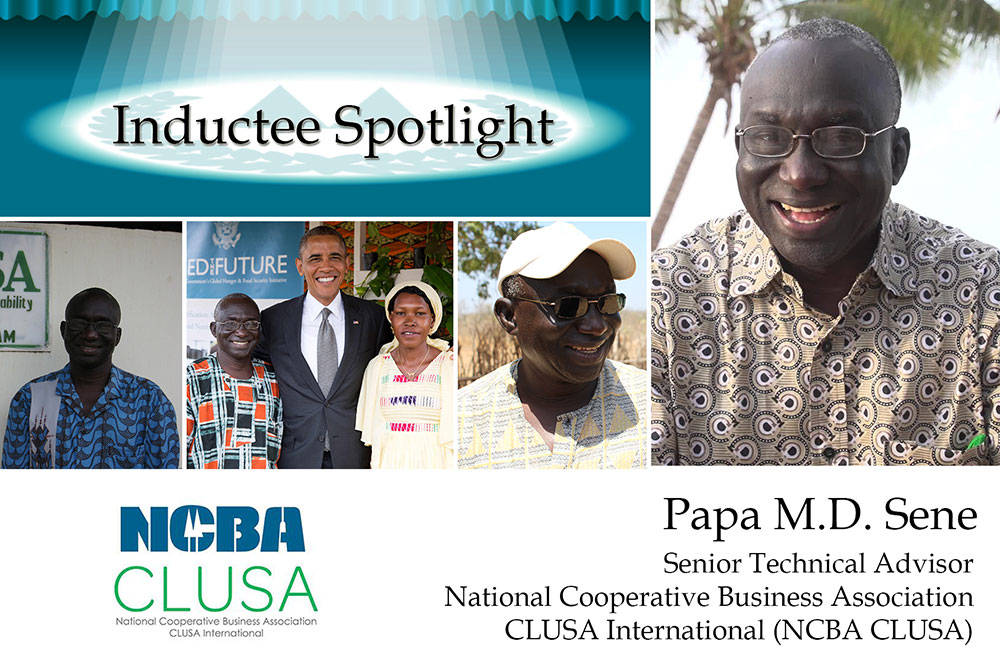 Pape Sene’s dedication to cooperatives and improving lives through cooperative development started long before his 30 year tenure with NCBA CLUSA. Sene grew up in Warang, Senegal, where cooperating was a natural way of life. Throughout his life, he taught, enhanced and, ultimately, globalized cooperative values and development. An Eagle Scout, Sene began spreading the co-op message during his early years with the Boy Scouts, then expanded it by leading a transformative co-op housing movement in the suburbs of Dakar in the 1970s. After serving a regional cooperative through the Senegalese government, Sene studied, and later taught, cooperative business at the National School for Applied Economics and completed two higher degrees in adult education and rural sociology in France.

Sene took bold leadership on the formation, implementation and constant refining of the successful and widely replicated “CLUSA Approach,” a participatory method of cooperative and local development that has changed hundreds of thousands of lives in 22 African countries and around the world. This approach has been applied to natural resource management, community-based health, food security, governance strengthening and the empowerment of women and youth. During his 30 years with NCBA CLUSA, Sene has been recognized by USAID and the World Bank, has written several books, delivered hundreds of presentations and received numerous awards for his achievements.

The Cooperative Development Foundation (CDF), the 501(c)(3) non-profit affiliate of the National Cooperative Business Association (NCBA) administers the Cooperative Hall of Fame. Nominations are received annually from throughout the cooperative community, with the final selection made by the NCBA Board of Directors on the recommendations of a selection committee of national cooperative leaders. The Cooperative Hall of Fame gallery is on display in NCBA’s offices in Washington, DC and it also can be visited on the web at www.heroes.coop. For dinner attendance or sponsorship information, call CDF at (202) 383-5445 or cdurand@cdf.coop.