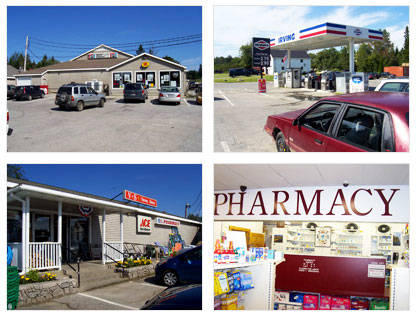 The employees of three local retail businesses in Maine have joined together to purchase what is now the state’s largest worker cooperative. The move is allowing longtime employees of the businesses to achieve economic security and build wealth through ownership, both for their families and their community. The Bangor Daily News published this news story on the new cooperative:

Two local retail businesses and one in Deer Isle have new owners. More than 40 of them, to be precise.

After many months of planning, the employees of Burnt Cove Market, V&S Variety and Pharmacy, and The Galley have purchased the businesses from Vernon and Sandra Seile and, in doing so, according to officials involved in the transaction, have created the largest worker cooperative in the state.

In a prepared statement released Wednesday, business and nonprofit officials who helped make the sale happen said that when the Seiles expressed an interest in retiring, employees were concerned that a new owner might reduce pay or the size of the staff. The three stores together comprise one of the largest employers on Deer Isle and other employment options in the area are limited, they said.

Ashley Weed, who has worked at Burnt Cove Market for 11 years, said Wednesday that she is excited about being one of the 45 members of the Island Employee Cooperative. She said she was worried a new owner might make her and others take a pay cut.

“I definitely like the idea [of the cooperative],” Weed said. “I am happy [the Seiles] actually sold it to us, so we don’t have to start at the bottom again.”

“I thought it was a good idea,” said Norma Morey, a cashier who has worked at Burnt Cove Market for 34 years. “Most everyone that works here is dependable and reliable.”

In 2013, the stores’ employees and the Seiles began consulting with the Maine-based Independent Retailers Shared Services Cooperative and the Massachusetts-based nonprofit Cooperative Development Institute to see if details and logistics for the employees buying the stores could be worked out. Nearly a year later, that goal has been realized.

Alan White, president of the new cooperative, said in the statement that having the employees buy the stores was a “once-in-a-lifetime opportunity.” He said that many of the employees bought into the concept of a worker cooperative right away, and that others had to be coaxed along. Not all employees decided to join the cooperative ownership, he said, but they didn’t have to. Seventeen employees opted not to join, and new hires also will be able to decline cooperative membership, he said.

“Many of us have worked in these stores for decades and never imagined this possibility,” White said. “We know we have a lot to learn and a lot of work to do to be successful, but success means we will really achieve the American dream—economic security and building wealth through ownership, both for our families and our community.”

Each member of the cooperative now has one share in the businesses and one vote in how they are governed. The members elect a board, which appoints managers to various positions. The managers will make decisions about the day-to-day operations of the store, but bigger issues such as capital improvement projects or changes in financing will be decided by membership votes.

According to Rob Brown of the Cooperative Development Institute, there are only two other businesses in Maine that operate under a worker cooperative structure—Crown of Maine, an organic food distributor in North Vassalboro, and Local Sprouts, a cafe and catering business in Portland. Both have only only a handful of employees, Brown said.

Brown said that the arrangement is different from companies with employee stock ownership plans in that members get to vote on major decisions, rather than just getting a share of the profits.

He said cooperative structures often make more sense for smaller businesses because of the cost of maintaining employee stock plans, and they help provide long-term economic stability to their members and the communities they serve. Only 30 percent of family-owned businesses survive into the second generation of ownership, he said.

“It’s not to the benefit [of a cooperative] to cut right down to the bone,” Brown said, adding that cooperatives have the potential to be effective for many small businesses in Maine.

Brown said that though the change in ownership became official on June 11, there still remains a lot of work to be done. But he said he and other consultants who helped with the transfer of ownership will continue to advise the new co-op on how to manage governance issues.

According to the Burnt Cove Market website, the Seiles’ ownership of the businesses dates back to the 1970s, when Vernon Seile bought the Stonington market and built The Galley grocery store in neighboring Deer Isle. V&S Variety, a home wares and hardware store located next to the Stonington grocery store, was built in 1995 and, when the island’s only existing pharmacy shut down in 2003, was expanded to meet the area’s prescription medication needs.