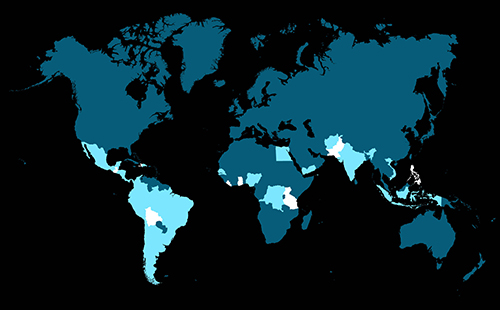 Cooperatives nationwide are joining together this October to celebrate Co-op Month, a time to reflect on the cooperative movement’s history and economic impact worldwide. The National Rural Electric Cooperative Association took the opportunity to publish some highlights from their international program, which has provided electricity to more than 110 million people in rural, underserved communities worldwide:

National Co-op Month is special to us, but when it comes to electric co-ops that represent rural communities around the world, it is special in more ways than you probably realize. In countries where democracy can be shaky at best and its people may not expect much more than a roof over their heads, being an owner in an electric co-op is empowering.

NRECA International has worked with hundreds of electric co-ops around the world, in some instances worked hand in hand with communities to establish their co-ops. Among them is the biggest one on the planet–can you guess where?

For the last 52 years, with support from our members and funding organizations like USAID, UN, international governments, and others, the staff of NRECA International has had a hand in expanding the electric co-op movement. Here’s a breakdown of electric co-ops around the world by the numbers:

NRECA International’s longstanding relationship with the Philippines government goes back to the 1960s. Based on our recommendations, the National Electrification Administration was established which started the electric co-op movement in the country. Today, there are 119 electric co-ops in this nation of islands that serve more than 9 million members.

One of the first NRECA International projects was the establishment of Cooperativa de Rural de Electrificacion Ltda. (CRE) – now the biggest electric co-op in the world and serves about half a million members. Did you guess right?

NRECA International has served as the primary technical advisor to the Bangladesh rural electrification program—thought to be one of the most successful programs in South Asia. The Rural Electrification Board was created in 1977 and led to the establishment of 72 electric co-ops that deliver power to more than 10 million members.

Active in cooperative and rural electrification development in this country since 1963, NRECA International has helped establish four electric co-ops. In 1989, our NRECA International staff also helped these co-ops form CONELECTRICAS, which on behalf of its members, owns and operates two small hydro plants and sells the energy output to its members.

In southwestern Haiti, our team helped establish a new electric co-op which will serve more than 1600 member-consumers in three towns. Starting next month, groups of volunteers from our American member co-ops will travel to Haiti to build and upgrade power lines.

After 20 years of civil war, the new country of South Sudan was born in 2012, the town of Yei became home to the country’s first electric co-op, and our NRECA International staff worked closely with USAID and the local community to make it happen.

Our mission continues to provide safe, affordable and reliable electricity to communities around the world that lack them using the human and financial resources of NRECA International. To learn more how you can help, go to www.nrecainternational.coop