Discussion and debate regarding energy resources are common in today’s news and political sphere. More and more people are becoming interested in where their energy is coming from and how companies are producing it. The movement promoting renewable resources is growing stronger as consumers and businesses demand clean alternatives. One of the most significant proponents for this push towards renewable energy is the nationwide network of electric cooperatives.

Across the U.S., energy cooperatives have been supporting clean electricity by generating and procuring renewable resources. Understanding the role rural cooperatives play in advancing clean energy is essential to recognizing how the movement is progressing as a whole.

What Is an Energy Cooperative?

To fully comprehend what an energy cooperative is and how it functions, you need to know the basics of co-operative identity and the organization of co-op groups. Cooperatives are non-profit organizations that serve their community as well as their customers and members. Their membership consists of autonomous individuals, all of which hold an equitable stake in the organization. Each cooperative centers around the core values of volunteerism, democracy and shared social and economic needs.

All cooperatives follow the same seven principles. They guide members and show them how to incorporate the co-operative identity into their practices. The seven cooperative principles are:

These principles outline the way cooperatives should operate and what they value as an organization. Energy cooperatives function under the same guiding values. They are autonomous groups led by their membership and directly serve their members and communities.

Energy cooperatives are entirely owned and governed by their members. Everyone plays a part in deciding on matters of governance and how the co-op delivers its services. As the cooperative develops and evolves, the customers benefit directly. They all have an economic stake in the cooperative and, since it functions as a non-profit, all excess funds or profits are reinvested into the services or equally distributed as dividends.

Rural electric cooperatives specifically focus on bringing renewable energy resources to small communities and rural regions. Typically, larger distributors don’t provide services for these areas as they have a low population density and are far from any major cities. They are a part of the broader system of utility cooperatives, all of which manage public services for rural communities. Electric cooperatives make up the vast majority of the network.

Energy co-ops also make up a significant portion of the U.S. electric industry. Electric cooperatives account for over 33% of the sector, making them notable players in the movement towards renewable energy. Organizations such as the National Rural Electric Cooperative Association (NRECA), Cooperatives for a Better World and the International Co-operative Alliance strengthen the broad network.

The Importance of Cooperatives in the Transition to Renewable Energy

Since energy cooperatives make up such a significant amount of the electric industry, they play an essential role in transitioning to renewable resources. Of the hundreds of electric cooperatives under the NRECA, 95% focus on renewable energy, either generating or procuring. They do so within their rural communities, serving populations that would have no other method of obtaining these renewable resources.

The communities that they serve draw a considerable benefit, economically and environmentally. Energy cooperatives are localized, meaning they operate within a small region and generate power for its grid alone. By functioning solely within individual communities, co-ops allow for a level of autonomy and connectivity that larger energy producers do not. They also provide the residents and governments with new sources of revenue, encouraging economic growth and job creation.

While cooperatives mostly operate within rural, lightly populated areas, some also extend into the suburbs. All together, electric co-ops are many and have a massive impact as a collective network. In the U.S. alone, energy co-ops extend their services to 42 million people, providing them with electricity and benefitting their communities. That factors out to about one in eight Americans.

Electric cooperatives provide many different types of renewable energy, including: 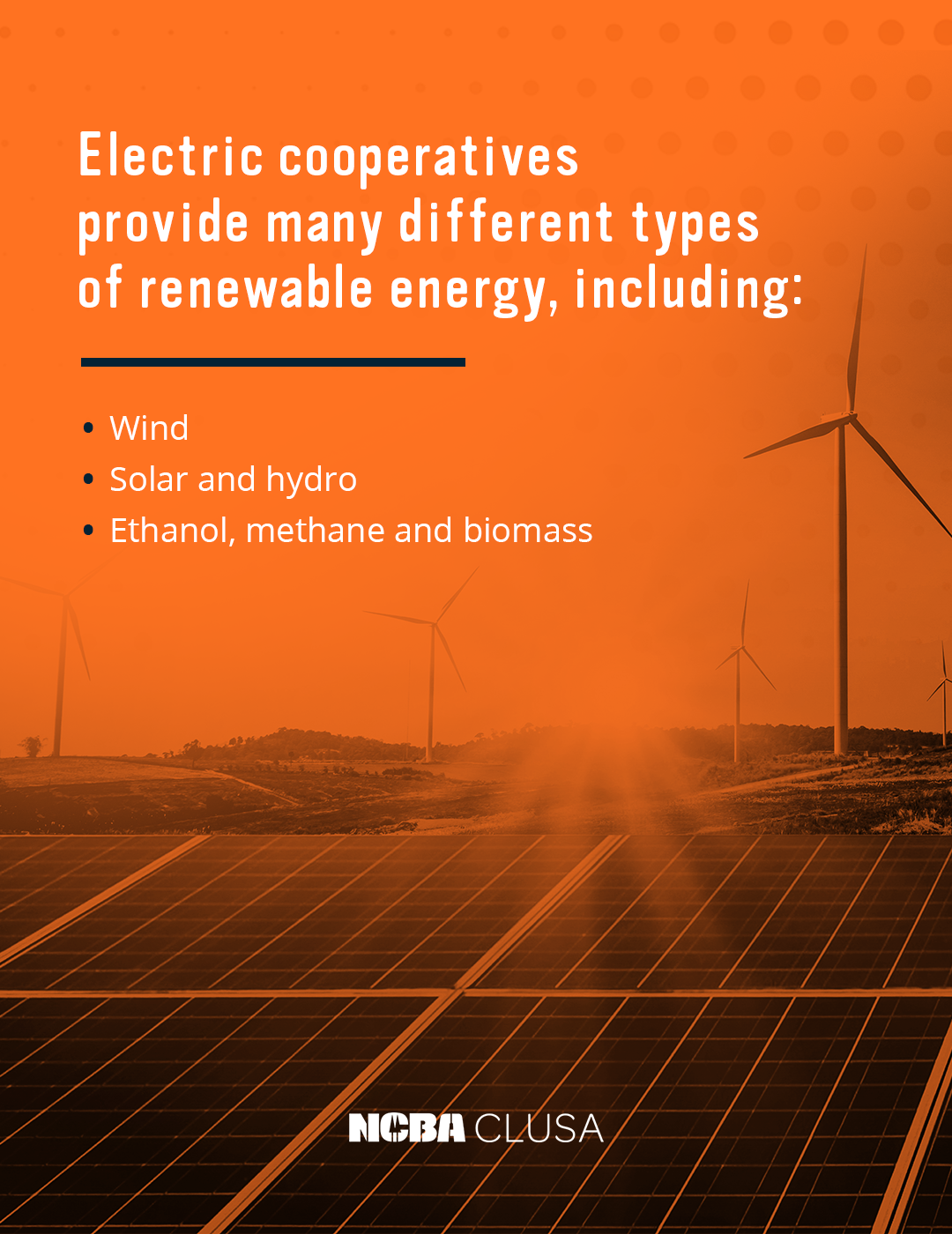 Currently, state and federal policy, coal investments and caps set by power purchasing agreements restrain many cooperatives from advancing. While energy cooperatives have managed to accomplish a considerable amount of progress despite these issues, they still have untapped potential. To function at their fullest capacity, co-ops need empowerment from local governments to fully develop and more autonomy granted by state and federal officials.

Rural areas are serious players in the movement towards renewable energy resources, but renewable energy also has a significant impact on the regions surrounding cooperative producers. The local communities, including governments and residents, gain more opportunities for improvement and growth.

Some of the major impacts advancing clean energy with co-ops has on rural communities are:

Among the more direct forms of impact, renewable energy co-ops are also in a unique position to educate others. Through outreach programs, co-op members can educate their consumers about the kind of energy they’re producing and how they operate. Residents and local governments will be more involved in the processes and better understand the energy production process.

Organizations like the National Cooperative Business Association (NCBA) CLUSA empower cooperatives to continue developing renewable energy and advocate for their continued existence. They also encourage governments and communities to support energy cooperatives and learn more about their operations.

There are four major areas of advocacy that the NCBA and similar organizations cover:

Beyond legislation, organizations and national programs, individuals can also do their part to advocate for renewable energy cooperatives. For one, they can learn more about cooperative identity, stay up to date on current events surrounding small business and encourage education. By understanding how co-ops advance clean energy, people can get involved in promoting organizations and supporting new or revised policy. Sharing information also empowers others to do the same.

To get involved more directly, the NCBA encourages individuals to contact Congressional representatives. Cooperatives need to gain recognition for federal policy to support them, meaning inclusion in budgets and eligibility for major programs. Anyone can help by reaching out and asking representatives to join NCBA CLUSA’s bipartisan Congressional Cooperative Business Caucus. It may convince members of Congress to stand up for co-ops and the organizations that advocate for them.

Rural cooperative enterprise is essential in the movement towards clean energy production. Co-ops play a significant role in producing and supplying electricity to millions of Americans. But they need support to be able to continue their development. To gain approval and endorsements, communities need to understand why electric cooperatives are important.

The National Cooperative Business Association CLUSA engages in advocacy efforts from local support to federal involvement. We have been helping to advance, promote and defend co-ops for over 100 years and have assisted thousands of businesses around the world. We encourage education and research regarding the cooperative movement and create opportunities for small businesses to succeed.

To learn more about what NCBA is and how we help support cooperatives, keep browsing our site or contact us with any information requests or questions you may have. You can also become a member of our growing community of advocates today.

Advantages of the Cooperative Business Model

How to Create Economic Growth With Cooperatives

Advantages of the Cooperative Business Model read more
How to Create Economic Growth With Cooperatives read more
Co-Op 101: How to Start a Co-Op read more
Differences Between Cooperatives and Other Enterprises June 4, 2019 read more