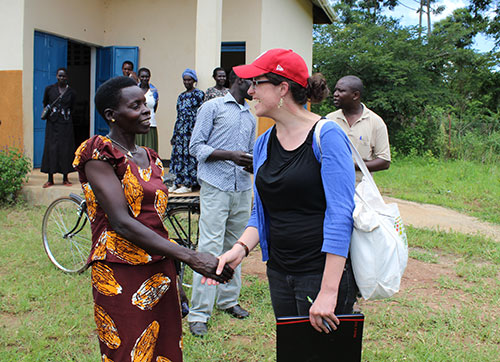 Value chain linkages have been key to the success stories reported during the two seasons that NCBA CLUSA has practiced Conservation Farming in Northern Uganda, USDA Program Analyst Lindsay Carter said during a recent three-day visit to NCBA CLUSA projects in the country.

Following a decades-long insurgency by the Lord’s Resistance Army that killed 100,000 people and displaced more than 2 million, efforts to solve food insecurity were hampered by a lack of knowledge to combat the effects of climate change on agriculture.

The Uganda Conservation Farming Initiative implemented by NCBA CLUSA and funded by the U.S. Department of Agriculture has trained more than 60,000 smallholder farmers organized in 2,000 primary cooperatives and 13 Area Cooperative Enterprises (ACEs) and linked them to various partners.

“NCBA CLUSA has done a good job of providing linkages,” she said. “Now it’s up to the young co-ops to move forward.”
The Nyeko Rac Cooperative in Uganda’s Lira District boasts 17 Producer Organizations comprised of 1,000 farmers—960 of whom are practicing Conservation Farming. NCBA CLUSA partners with Tillers International to train farmers how to implement CF land preparation techniques.

The cooperative is also securing inputs for its members in bulk from reputable suppliers, largely addressing the problem of counterfeit inputs on the market. This has increased member confidence in using improved inputs, resulting in higher returns for the members and fostering increased adoption of Conservation Farming. 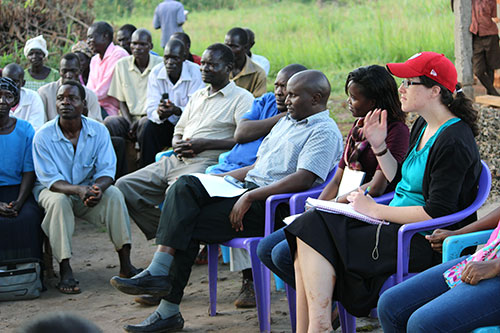 The profits from sales—US$80,231 from maize, $40,015 from soy beans and $7,284 from legumes—have allowed the coop to purchase 2.5 additional acres of land, build an office and buy machinery to produce animal feeds, a relatively untapped business venture expected to diversify the co-op’s incomes.

Ogwal Bonny, managing director of M-Motivation, explained the organization’s model, which has resulted in record sales of 21 tons of improved seeds. Before Conservation Farming techniques were implemented, only nine tons were produced, he said. Bonny attributes the capacity growth to the training NCBA CLUSA Uganda offered farmers in using improved seeds and good recordkeeping.

Carter also heard from NCBA CLUSA Uganda’s Agro Business Advisor Oliver Okello, who praised the organization’s partners who have worked cooperatively to make Dokolo achieve the best CF adoption rate. Talking to more than 300 farmers who gathered to meet the USDA representative, NCBA CLUSA Uganda Chief of Party Gretchen Villegas commended Dokolo Area Farmers Cooperative for a job well done and attributed it to the seven cooperatives principles which, she said, were all being practiced “diligently” in Dokolo.

In Oyam District, Carter visited Grace Opono, a woman Tiller Service Provider (TSP) who after training with Tillers International, has embarked on training other farmers after buying an ox and settling education costs for her seven children. This season alone, Opono has ripped 250 acres and has already bought her own knapsack herbicide sprayer. She was also elected chairperson of the local women’s group, an achievement she attributes to Conservation Farming.

“I am impressed by how Grace reaches out to other farmers to share her knowledge and skills. I believe soon all her neighborhood will be practicing Conservation Farming,” Carter said.