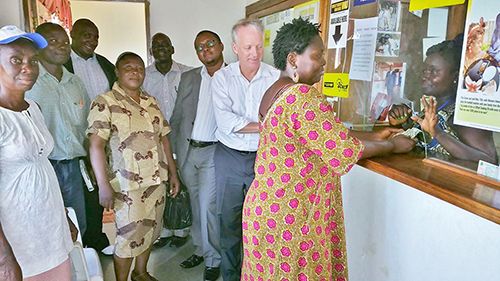 The World Council of Credit Unions is resuming its efforts to strengthen the credit union sector in Liberia, which was recently declared Ebola-free. The organization’s project in the West African country is expected to provide financial services to often unbanked rural populations. World Council published this report:

After a nine-month suspension due to the Ebola virus outbreak in Liberia last year, the World Council of Credit Unions has revived its model credit union building project that aims to bank 40,000 Liberians previously without access to financial services.

The Ebola virus, which led World Council to withdraw its project manager from the country, has been on the wane since March. In April, World Council Chief of Party Patrick Muriuki returned to Liberia to resume his management position.

World Council, with MasterCard Foundation funding through the UN Capital Development Fund (UNCDF), has partnered with the Liberian Credit Union National Association (LCUNA) to rebuild the credit union sector devastated by15 years of civil war. Representatives from each organization met recently in Monrovia to discuss next steps.

“We are quite pleased to restart a project that will bring access to financial services to thousands of Liberians over the next two years,” said Peter Graves, World Council senior vice president for Technical Services. “Although we had to place the project on hold, LCUNA and its credit union members never stopped their efforts to bring in new members and provide loans to help Liberians thwart Ebola’s destructive impact.”

LCUNA Board Chair Saye Biyie was especially grateful to UNCDF and World Council for re-engaging in Liberia.

“This project is our heart,” Biyie said. “It represents the difference—literally—between life and death for many Liberians. We are grateful to UNCDF and World Council on their decision to re-start the project.”

Prior to the civil wars that started in 1989, Liberia had a thriving credit union sector that World Council helped create in the 1970s. The current project’s objective is to develop four regional credit unions to serve as models for the rest of the sector and strengthen the national association so it can better serve its members.

Hermann Messan, representing UNCDF, reiterated his agency’s commitment to the Liberian people and support of the Government of Liberia’s financial inclusion strategy. UNCDF views the credit union movement revitalization as the key to empowering rural people through financial inclusion, especially since this aligns well with the government’s strategy and the Central Bank of Liberia’s action plan.

“UNCDF has been active in this country for many years—even in the midst of the Ebola crisis—and this stakeholders’ workshop is the best mechanism to resume the project and get all parties realigned towards the targets and the objective of bringing positive change in the rural communities,” Messan said.

“Liberians are a tough lot; they’ve been through years of civil war. No Ebola virus is going to stop them from improving their lives, and credit unions are central to this effort,” Muriuki said.