The purpose of consumer cooperatives is to offer goods and services at the lowest cost to the customer-owners — in contrast to companies that serve the interests of stockholders. A consumer co-op retains profits as capital with mutual ownership or invests the funds into the growth of the organization. The member-owners control the business and share a common goal to deliver quality products and services at low prices.

Millions of Americans are involved in consumer co-ops. Below are a few key facts:

Consumer Co-ops: How They Work

Co-ops operate under the guidance of the seven cooperative principles. The most important principle for a consumer cooperative is democratic member control in which each member has one vote.

Every member has the power to control the business by voting on leaders and deciding how to run the co-op. An elected board of directors is charged with hiring managers and monitoring the co-op’s progress toward financial and other goals. Each co-op holds regular membership meetings and maintains a set of bylaws or another organizing document.

In a consumer cooperative model, every member is a shareholder, so everyone’s voice is heard. Consumer co-ops focus on serving their customers, not turning a quick profit, and work within a mutually supportive economic model.

National and international organizations stand with consumer cooperatives in their mission to serve members:

Did you know that 65,000 cooperative enterprises operate across the U.S.? At NCBA CLUSA, we provide a voice for these co-ops. Through resources and education, we create platforms for cooperatives to participate, lead and partner with others in the global community.

NCBA CLUSA and its members aim to advance development, advocacy, public awareness and thought leadership in the cooperative movement.

Interested in learning more? Read about the cooperative business model and NCBA CLUSA’s mission and vision. Feel free to contact us with any questions.

If you’re ready to build a better world and a more inclusive economy together, become a member today.

THE ABCs OF Consumer CO-OP IMPACT

This sector report examines how consumer co-op ownership influences economic activity, community vitality and individual well-being based on a seven-factor framework developed by the Urban Institute in partnership with NCBA CLUSA and the Cooperative Development Foundation. These factors are Access; Business Sustainability; Community Commitment; Democratic Governance and Empowerment; Equity, Diversity and Inclusion; Financial Security and Advancement; and Growth.

The primary driver of consumer cooperatives has always been access to goods or services beyond what is provided by the conventional, investor-owned model. In the 19th century, it was affordable food. A “new wave” of food co-ops in the late 1960s and 70s focused on natural, organic foods— products that were in demand, but not readily available in supermarkets. These new food co-ops not only wanted better access to products but also an ethical, transparent food system. Food co-ops were early innovators in their adoption of fair trade goods, and have been at the forefront of meeting the recent demand for locally-sourced foods.

The tenacious nature of many local food cooperatives—surviving for 40 or 50 years in the highly competitive and low-margin grocery industry—is a testament to the sustainability of the consumer cooperative model. Of the 100+ new food co-ops that have started in the last decade, about two-thirds are still operating,8 a high rate of survival for such startup businesses, which do not have access to the same capital sources as some of their investor-owned competitors. Food co-ops also contribute to the sustainability of other businesses by purchasing 21 percent of their products from local suppliers, compared to less than 2 percent at conventional grocery stores.

Food co-ops give generously to local charities. In 2016, they contributed more than $2.6 million, a rate of giving that is 44 percent higher as a percentage of revenue than the typical grocery store. The average food co-op also donates more than 24,000 pounds of healthy food to community food banks every year.10 And food co-ops lead the grocery sector in recycling rates, energy conservation and the effective containment of refrigerants, a major contributor to greenhouse gases.

Food co-ops are a testament to how people, working together, can change the behavior of markets to reflect their values. Given the opportunity to influence not just what they consumed, but how their food was produced and sold, food co-op members stepped up. Minimal and recyclable packaging, organic products and nutritional labeling are all ubiquitous elements of the general food market now; each saw their start in the cooperative movement.

Since 2005, many “third wave” food co-ops have launched specifically to create open, inclusive and diverse stores that represent their communities. Durham Co-op Market’s Food for All program provides a discounted member-ownership fee and a 20 percent discount on all products for customers who qualify for federal food assistance programs. 12 Programs like “Co+op Basics” help food co-ops across the country offer a core array of more than 100 basic grocery and household items at below suggested retail price. This everyday low pricing structure helps members on a budget to quickly identify the lowest priced offering in a category, making co-op shopping more accessible to everyone.

The average hourly earnings of food co-op workers are about 7 percent higher on average than other grocery stores. In an industry that relies heavily on part-time labor, food co-ops also stand out with over 60 percent of employees working full-time with benefits, compared to 43 percent in conventional stores. Because of this, more than two-thirds of co-op employees qualify for health insurance, compared to just over half of regular grocery store workers.

Data from National Co+op Grocers show that consumer food cooperatives create more jobs than other kinds of grocery stores—9.3 jobs for every $1 million in sales, compared to 5.8 jobs at traditional grocery stores that rely more on automation and centralized managerial functions.14 Combined with their preference to source locally, hiring more local employees means that the economic multiplier effects of a food co-op is far greater than that of a comparable conventionally-owned grocery store.

When the single grocery store in Yukon Territory’s most remote northern community closed, residents decided to take ownership of their food supply.

Even before it left town in 2014, their store didn’t participate in Canada’s Nutrition North program, which makes perishable, nutritious foods more affordable and accessible to remote communities by subsidizing the high cost of shipping and stocking items so far north.

“We had no say in what they would sell. We needed bread, eggs and milk, but a plane-full of pop, candy and chips would be coming in,” said Paul Josie, a resident of Old Crow.

Meanwhile, the grocery chain was making its third-largest profits of the community—to the tune of $1.8 million, said Tracy Rispin, General Manager of Old Crow Co-op. “To see that, and not see it [reflected] in the community, I didn’t like it,” she said.

Arctic Co-operatives traces its roots back to the late 1950s when changes in government health and education services began arriving in the Arctic, and people who had primarily been living a nomadic lifestyle began to settle in villages where such services were offered.

Its original purpose was to act as a collaborative agent to market authentic Inuit art and artisanal products. Fur harvesting and fisheries were also early cooperative ventures. A network of autonomous and independent grocery and general merchandise stores was launched in 1972 and, in 1981, the networks merged to form Arctic Co-operatives.

Other services include grocery, general merchandise, fuel, cable TV and hospitality services. Access to basic food and supplies is an obvious driver for Arctic Co-operatives, whose members service very remote communities, some with as few as 100 year-round residents, and half of which lie above the Arctic Circle. Business sustainability for each cooperative is greatly enhanced by their federated structure.

After the government, Arctic Co-operatives Limited is the major employer of Inuit people in the North of Canada, making it a primary engine of economic growth for these remote communities. 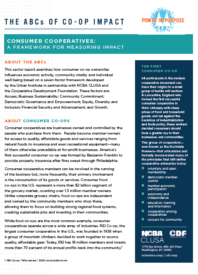 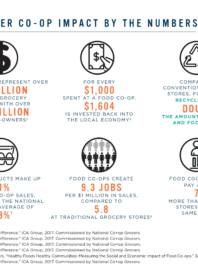 Consumer Co-ops By the Numbers