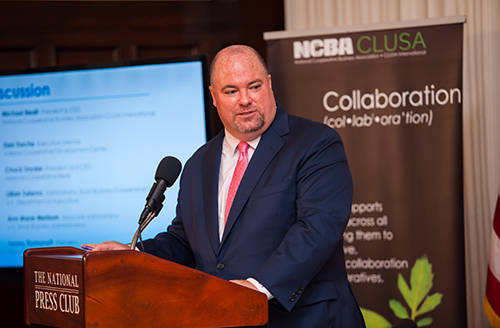 Co-ops are a “bright spot” for job creation in rural America, and with “wise, strategic” investment in cooperative business, the public and private sectors can help provide the influx of capital Middle America needs to match the rate of post-recession economic recovery enjoyed by metropolitan centers along the East and West Coasts.

That was the message from Doug O’Brien, Deputy Under Secretary for USDA Rural Development, at last week’s Co-op Month Forum and Panel Discussion hosted by NCBA CLUSA at the National Press Club in Washington, D.C.

The event highlighted the role of co-ops in growing the U.S. economy and creating sustainable jobs, and featured development experts from the USDA, U.S. Small Business Administration and the private sector.

Ripe with what O’Brien called “historic opportunities and potential” in the areas of infrastructure and workforce development, rural America is poised for significant growth and holds unexpected benefits for investors, he said.

According to the study, “Promoting Growth for All Regions,” released in 2012 by the Organization for Economic and Cooperative Development, the rural regions of some 30 industrialized countries worldwide—among them the U.S.—are growing faster than urban regions in the same countries, O’Brien said. The study also shows that investment in rural areas tends to yield greater returns on public and private dollars than comparable investment in urban areas.

“It’s time for policymakers to look to rural places when they’re thinking about investments,” he said. “And it’s time for those who already work in rural America to think about what they’re doing and consider whether they can do it better.”

O’Brien’s call for more strategic development in rural America was echoed by the five panelists who participated in the October 22 discussion.

Public investments in rural America administered by the USDA are prioritizing local food production in high-poverty areas, said Lillian Salerno, administrator of the USDA’s Rural Business-Cooperative Service. One in four children in rural America lives in poverty, and one in eight children struggles with “deep” poverty. These households exist well below the poverty line, or on about $11,500 per year for a family of four.

In the Southern U.S., Salerno added, poverty is exacerbated by food deserts—communities with little or no access to fresh, affordable fruits and vegetables. In such food deserts, the USDA’s Rural Business-Cooperative Service has already funded hundreds of farmers markets and other rural food hubs—many of them “co-ops or potential co-ops,” she said.

Largely driven by consumers—especially young people—who expect to know whether their food is sustainably and ethically produced, the “food hub” movement is gaining momentum across the country, said Deb Trocha, executive director of the Indiana Cooperative Development Center and NCBA CLUSA Board member. Farmers markets, once a “hobby,” she said, are now operated as profitable businesses. Co-ops, too, are taking the cue and increasingly prioritizing strategic planning and capitalization, she said.

Young people are also behind the new “shared economy,” said Ann Marie Mehlum, associate administrator for the U.S. Small Business Administration, referring to the ridesharing service Uber and Airbnb, a community marketplace for accommodations worldwide.
There’s “energy” around sharing resources, and co-ops should tap into that “natural overlap,” Mehlum said, emphasizing characteristics such as democratic member control, ethical behavior and concern for community.

Leta Mach, who teaches what it means to be a member of a co-op to parents and young children through her work at Parent Cooperative Preschoolers International, said education early on is critical to raising a generation of young people who understand the value of co-ops. At the Greenbelt Cooperative Alliance, where Mach is a member, children are learning entrepreneurship by selling bicycle-blended smoothies at local farmers markets, she said.

Many organizations are advocating for the inclusion of co-op education in curricula nationwide, especially at the MBA level, said Michael Beall, president and CEO of NCBA CLUSA and moderator of the discussion.

A “groundswell” of support from students and parents is needed to change curricula, Trocha said. Co-op leaders could volunteer as guest speakers at schools and show up at career fairs to help spur awareness, she said.

“We’re swinging below our weight,” said Chuck Snyder, president and CEO of the National Cooperative Bank. “We really could be more influential than we are.”

But does the cooperative movement have room for a new crop of young leaders? Georgetown University, Beall said, boasts its own $20 million-strong student-run credit union, but the vast majority of those students go on to Wall Street, not careers in co-op leadership and development.

“This is the brain drain we’re talking about,” Beall said. “We don’t find space for all of these talented young folks.”

When a board of directors recently asked Beall how co-ops could attract young people, he said a “tough answer” immediately came to mind: “Step aside. Somebody has to create a space. If board makeup doesn’t involve folks who are 35, I think co-ops are missing an opportunity to inject a totally different mindset into their operations.”

As the cooperative community advocates for change—whether in curriculum, leadership or federal policy—Beall left audience members with a threefold challenge to “live Co-op Month” now:

• Institutional—self identify as a co-op

• Personal—make a co-op part of your everyday routine

“All of us have habits. Choose in some way in your life to bring a co-op in. That could be opening an account at a credit union, buying Organic Valley, or telling your realtor that you want to live in a housing co-op,” Beall said.

That level of professional and personal ownership will help demonstrate that cooperatives are “not a sideline of the U.S. economy for the millions of people who rely on them every day,” he said.