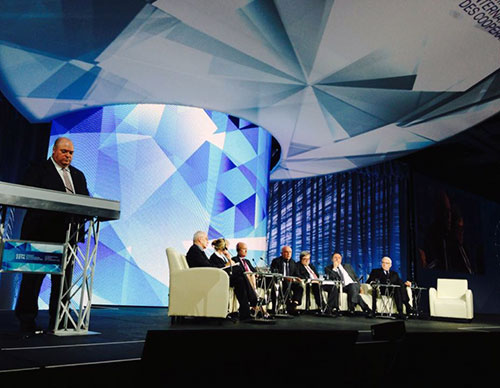 In recent years, cooperatives have posted the best growth of any market sector, weathering a global economic downturn, innovating to overcome challenges and scaling up job creation and productivity worldwide.

At a discussion moderated by NCBA CLUSA President and CEO Michael Beall last week at the 2014 International Summit of Cooperatives in Quebec City, Canada, panelists addressed the scale of cooperative employment and its proven ability to help people achieve financial independence.

The cooperative movement’s growth and success can be attributed to its commitment to “lend, defend and upend,” Beall said.

“Mutuals, credit unions and SACCOs have continued to lend when banks have pulled back in recession. Co-ops have continued to defend consumers from predatory actors and practices across sectors, and we have upended conventional wisdom about co-ops,” Beall said during the panel discussion. “Sometimes seen as social actors, co-ops are now increasingly relied on as businesses and effective partners in job creation and productivity.”

A new study by the International Organization of Industrial and Service Cooperatives (CICOPA) outlines the impact and scope of the cooperative movement, offering details on cooperative contributions to resilient employment, economic recovery and employee well-being worldwide.

Bruno Roelants, secretary general of CICOPA and a panelist, introduced the results of the organization’s recent 15-month study, “Cooperatives and Employment, a Global Report,” during the discussion.

While based on “incomplete” data that should be considered “estimates, not statistics,” the study indicates that “at least” 250 million people worldwide “work in or within the scope of cooperatives,” making up 12 percent of the entire workforce in the G20 countries, Roelants said. That percentage almost doubles in South Korea and some parts of France and Italy, he said.

“We hope that this study will encourage further research, as well as serious statistical work on co-ops everywhere, and that it also continues to draw the attention of policymakers, civil society and the cooperative movement itself as we recognize the enormous involvement and potential of cooperatives,” Roelants said.

With co-ops increasingly on the radar of decision-makers worldwide, the movement is empowered to tackle persistent challenges to job creation, said Sandra Polasky, deputy director-general for Policy for the International Labour Organization (ILO) and a panelist. The ILO is a United Nations agency that oversees employment issues, particularly international labor standards and decent work for all.

“Looking forward, the global economy will need to create more than 600 million jobs between now and 2030 to accommodate those currently seeking employment and those just entering the labor market,” she said, a number that grows significantly “if we’re able to increase the participation of women and youth in the workforce.”

The labor market is also seeing deterioration in job quality, Polasky added, particularly among jobs open to low- to medium-skilled workers. “In the developing world, nearly one in four workers and their families live on less than $2 a day, constituting ‘working poverty,’” she said. Increases in involuntary part-time work and short-term contracts are further eroding employment quality in the developed world.

As “value-driven, principled enterprises,” co-ops are “key partners” in working toward social justice and full employment, and function as “major building blocks” in a jobs-oriented economic recovery strategy, Polasky said.

Co-ops, she added, are uniquely positioned to support gender equality and career advancement through education and training, as well as examine their supply chains to eliminate abuses such as forced labor and discrimination. Co-ops also play a crucial role in formalizing jobs and small businesses in the informal economy.

“Co-ops are partners in creating quality employment, providing social protections for their member-owners and their communities, giving a voice and representation to those who have often found themselves excluded from democratic decision-making,” Polasky said.

The business model is gaining traction even in economies not historically supported by cooperatives.

Over the next five to ten years, Beall said, an estimated 25 percent of previously government-run businesses in Cuba—ranging from the textile industry to auto repair shops—will outsource jobs to cooperatives. Beall and a team from NCBA CLUSA recently led a research and education trip to Cuba to gain a clearer picture of the cooperative movement there, which observers say is playing an increasingly significant role in the country’s push for economic reform.

“It’s an interesting transition for Cuba, and one we can all learn from in the sense that not just traditional co-ops, but every business going forward, can use the cooperative model,” he said. “It’s an empowering time!”