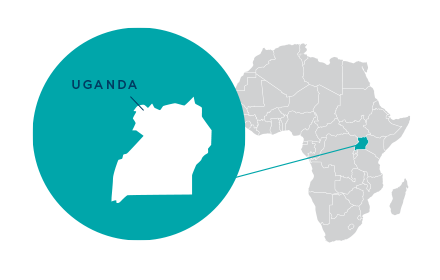 Now in Phase 2, NCBA CLUSA is training farmers in 21 disctricts in Uganda on the proper use of triple-layer storage bags, also known as PICS bags. The PICS project will use Community Based Service Provider (CBSP) entrepreneurs acting as extension and sales agents for the distribution of the PICS bags across Northern Uganda.

funded by:
Bill and Melinda Gates Foundation and Purdue University
$712,425

Now in Phase 2, NCBA CLUSA is training farmers in 21 disctricts in Uganda on the proper use of triple-layer storage bags, also known as PICS bags. The PICS project will use Community Based Service Provider (CBSP) entrepreneurs acting as extension and sales agents for the distribution of the PICS bags across Northern Uganda. 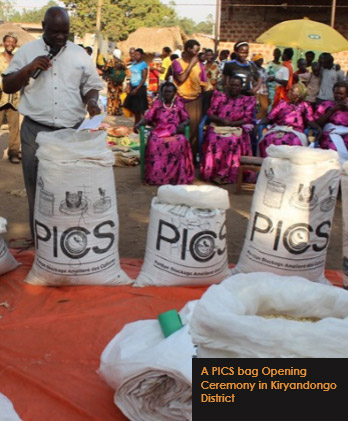 PICS triple-layer plastic storage bags were developed by the Bill and Melinda Gates Foundation to protect cowpeas in storage from destruction by weevils. The second phase of the project allowed the product to be expanded for controlling insect pests in many other crops as well. As a part of the third phase of technology development, Purdue entered into a partnership with NCBA CLUSA to distribute the bags to smallholder farmers in remote areas of Uganda through the established CBSP network.

To increase awareness of the PICS bags, media programs promote the bags and demonstrations are carried out to both show proper bag use and make bag sales. During these demonstrations, farmers’ grains are stored in the PICS bags then later opened at Open Bag Ceremonies to publicly demonstrate the effectiveness of PICS bag use. 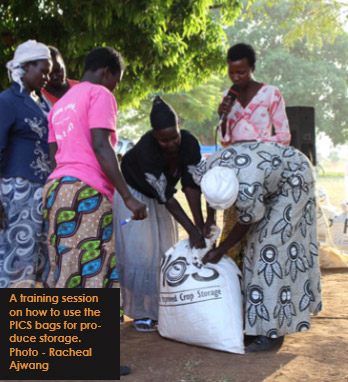 Normally after a harvest, supplies peak and prices are low. This is the worst time for any famer to sell their produce, but many have little choice. Sell for less or lose everything becomes the farmer’s slogan.

PICS bags provides an affordable and flexible storage option to farmers, especially those without money to buy chemicals or those who do not want to apply chemicals to their produce.

Aloysius Byamugisha, a farmer from Dokolo says, the new storage technology ensures food security, especially to the farming households since farmers can use them to keep dried food over long periods of time. Rather than selling off their harvests cheaply, in fear of pest damage, and buying back from traders at times of scarcity at higher prices, farmers have their own food to eat already stored at home.

“Immediately after harvest, prices are very low hence farmers can keep grains for three to four months and sell at better prices without fear of quality deterioration,” said Byamugisha.
This type of storing crops provides a safe way to store grains as compared to the dangerous chemicals that are normally used by the farmers and traders to prevent insect pest attacks.

“Some countries and international organizations who buy our crops such as maize, beans and other grains have on different occasions threatened to reduce the price of crops stored using chemicals than those which are chemical free,” Byamugisha added.

Selling chemical-free crops, especially abroad, will enable Ugandan crops to compete favourably with those from other countries who use chemicals for long term storage.