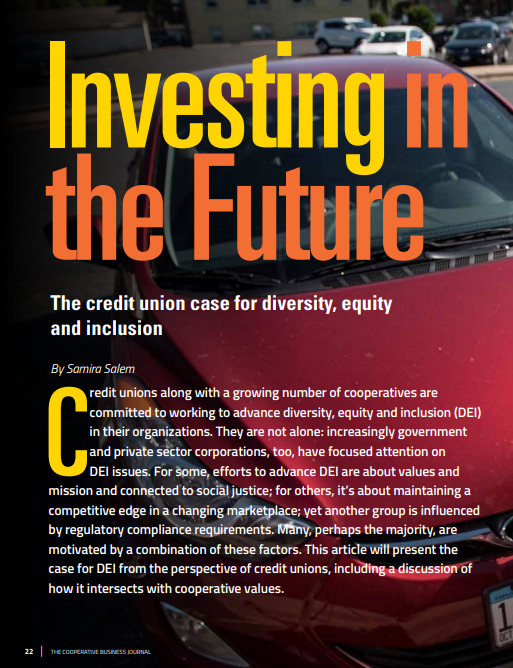 Investing in the Future

The credit union case for diversity, equity and inclusion

Credit unions along with a growing number of cooperatives are committed to working to advance diversity, equity and inclusion (DEI) in their organizations. They are not alone: increasingly government and private sector corporations, too, have focused attention on DEI issues. For some, efforts to advance DEI are about values and mission and connected to social justice; for others, it’s about maintaining a competitive edge in a changing marketplace; yet another group is influenced by regulatory compliance requirements. Many, perhaps the majority, are motivated by a combination of these factors. This article will present the case for DEI from the perspective of credit unions, including a discussion of how it intersects with cooperative values.

While it’s undeniable that DEI is the right thing to do, there are several other factors that motivate organizations to prioritize DEI. At its most simplistic level, the case for DEI within the credit union movement can be thought of as a three-legged stool that includes the values case, the business case, and the policy and regulatory case. It’s important to recognize that all three factors intersect with significant demographic changes in the U.S., and an increasing awareness of social and economic disparities faced by people of color, LGBTQ+ individuals, women and other traditionally underserved groups. It is in this environment that the credit union movement has committed to prioritizing diversity, equity and inclusion.

While DEI is embedded in each of the cooperative principles that guide credit unions, the Credit Union National Association (CUNA) Board of Directors recently added DEI as a shared cooperative principle for America’s credit unions. The CUNA Board did this because they recognize that DEI is so important that it deserves to have separate recognition and a distinct commitment on the part of the credit union movement. Significantly, this action by the CUNA Board elevates DEI, generates momentum, and brings it into focus as a priority for the movement.

As cooperatives, credit unions are uniquely positioned within the financial services industry because we have a values case for DEI anchored in our cooperative principles and values of serving all communities, including those traditionally underserved; as well as our structure—member-owned, democratically controlled and not-for-profit—which ensures that credit unions’ success is bound up in the success of its members and their communities.

It’s not surprising, then, that people of color, women and LGBTQ+ communities are among those traditionally underserved by the financial services sector.

Credit unions were established to provide opportunities for financial inclusion to those excluded from the traditional financial system. An important example of this is the African American credit unions of the early 20th century. Established by African Americans, these institutions were designed to provide opportunities for financial access to their community, which had been excluded from the mainstream financial services industry.

Remaining true to our roots and values and relevant in the context of an increasingly diverse nation means being intentional about deepening DEI in our organizations so we can better reach and serve diverse populations. Jim Nussle, President and CEO of the Credit Union National Association, summarizes it well; “Diversity, equity and inclusion are a part of what credit unions do each and every day. Our cooperative principles have guided us to fulfill our mandate and be a resource to all consumers—no matter their income, race or religion. But we’re committed to doing more.”

In addition to the values case, there’s an undeniable business case for DEI. There are two related parts to the business case: 1.) Market Access; and 2.) Business Performance. Market Access: Advancing DEI promises market access to a growing market for credit unions and other cooperatives. Within the next two decades, the U.S. Census Bureau projects that people of color1 will become the majority in the U.S. We know that people of color are often underserved, face additional barriers, and may have different preferences and needs when it comes to financial services. To better serve diverse populations, credit unions need to become more diverse, more equitable and more inclusive at all levels of our organizations. Doing so signals to members that they are valued and that they will receive equitable service. In turn, this helps build the sort of trusting relationships and loyalty needed for credit unions to better understand and meet the specific needs of these groups and ultimately support them to meet their financial goals and prosper.

Business Performance: The second part of the business case is focused on how DEI in the workplace is good for business (e.g. competitive advantage, profits and earnings, innovation, risk reduction, employee satisfaction and retention, etc.). There is abundant evidence that DEI is good for organizations and their employees.

While nearly all research examining the business case for DEI focuses on corporations as opposed to cooperatives, new research by the Credit Union National Association (CUNA) focuses on the business performance of credit unions that expand their Hispanic/ Latinx outreach efforts. We find that these efforts to reach out to the Hispanic/Latinx communities, which include tailored products and services and increasing credit union diversity perform better relative to those that do not expand their Hispanic/Latinx outreach efforts. Specifically, credit unions that joined Coopera’s Hispanic Outreach Program grew their memberships by 33 percent more than credit unions that did not join. These credit unions also experienced 44 percent and 31 percent higher increases in loans and assets, respectively, and 0.32 percent greater earnings. To a much weaker extent, portfolio quality—as measured by the delinquency and charge-off ratios—shows improvement for credit unions that participated in Coopera’s Hispanic Outreach Program relative to those that did not. CUNA conducted similar research on credit unions that receive the Juntos Avanzamos Designation—a designation for credit unions committed to serving and empowering Hispanic and immigrant consumers—and the results were generally similar.

The McKinsey study also finds that there are costs associated with opting out. Companies in the bottom quartile for gender and ethnic/cultural diversity were 29 percent less likely to see above-average profits.

Another body of research finds that more gender diversity on boards is associated with 20 percent higher risk-adjusted returns and higher board effectiveness, including fewer regulatory enforcement actions and less fraud. An important caveat that the researchers point to is that simply adding one woman to a board is not sufficient; the positive effect emerges when organizations add a woman to boards that already enjoy some level of diversity.

Other studies find that diverse and inclusive teams are 20 percent more innovative and are better able to detect “blind spots,” and are 30 percent more effective at avoiding risks. As individuals’ sense of inclusion increases, this translates into an increase in team performance (17 percent), decision-making quality (20 percent) and collaboration (29 percent). At the same time, it’s important to recognize that diversity and inclusion can be a double-edged sword, generating creativity but also possibly generating friction and discomfort because there are different perspectives to consider and the team cannot easily fall back on groupthink.

Diverse and inclusive organizations are more successful at attracting and retaining top talent. According to a survey by Deloitte, 80 percent of respondents say that inclusion is an important factor when choosing an employer and 39 percent of respondents say that they would leave their current employer for a more inclusive employer.15 In addition, a study by the Institute for Public Relations finds that nearly half of millennials (47 percent) indicate that a diverse and inclusive workplace is an important factor in their job search.16

Moreover, research finds that inclusive work environments are associated with enhanced job performance and work engagement. Perhaps this is because employees feel like they belong, are valued, their voice is heard, they are safe, and they can fully contribute to the mission of the organization.

Evidence suggests that diverse and inclusive organizations are better able to serve the needs of diverse customers. Research examining the relationship between staff diversity and customer satisfaction finds that customer satisfaction is higher when the level of staff diversity reflects that of their customer base. This translates into a boost to a company’s bottom line.18 The study suggests that a more representative staff signals to customers that the company doesn’t discriminate in hiring and that customers would receive equitable service.19 Perhaps, customers who see employees that look like them will be more inclined to view an organization as acting in their best interest and/or in a position to better understand their experiences.

Credit unions also have a policy and regulatory compliance case for DEI to consider. Policymakers and regulators have made it clear that they care about DEI. In 2019, the House Financial Services Committee established the first-ever Subcommittee on Diversity and Inclusion.20 The Subcommittee is charged with examining and resolving “the systemic economic exclusion of women, people of color, persons with disabilities, LGBTQ+ individuals, veterans and other members of our society who have to fight for a seat at the table.”21 In its inaugural year, the DEI Subcommittee held several hearings on DEI in the financial services sector.

Also, the National Credit Union Administration’s (NCUA’s) Office of Minority and Women Inclusion (OMWI)—established by the Dodd-Frank Act—is charged with assessing DEI practices at credit unions. OMWI is a prime example of how credit union regulators are focused on DEI. Indeed, in 2019 OMWI held its first annual DEI Summit. More than 150 credit union representatives and movement partners attended the summit, signaling the importance that both regulators and credit unions place on advancing DEI among credit unions.

Relevant, competitive and true to our cooperative values

Advancing diversity, equity and inclusion keeps our organizations relevant, competitive, and true to our cooperative values. It’s also the right thing to do—especially within our current context of racial injustice, increasing income and wealth inequality and the significant socioeconomic inequities that disproportionately impact historically underserved groups. Credit unions recognize these opportunities and challenges and are committed to working to deepen DEI in the financial services industry.

Samira Salem has more than 20 years of experience in international economic development, community development, policy research and social finance. She joined the Credit Union National Association in 2018 as a Senior Policy Analyst in the Research and Policy Analysis division. Recently, she was promoted to Vice President of Diversity, Equity and Inclusion (DEI) at CUNA. Samira earned her Ph.D. in Political Economy and Public Policy and her master’s degree in Economics from the University of Southern California.

The Right Tool To Build A More Equitable Society

An exclusive statement for the Cooperative Business Journal

A Conversation on Diversity, Equity and Inclusion

A Conversation on Diversity, Equity and Inclusion

Investing in the Future

The credit union case for diversity, equity and inclusion

The Case for Clarity

A legal framework for inclusive co-ops and stronger economies

The path to financial inclusion for returning citizens