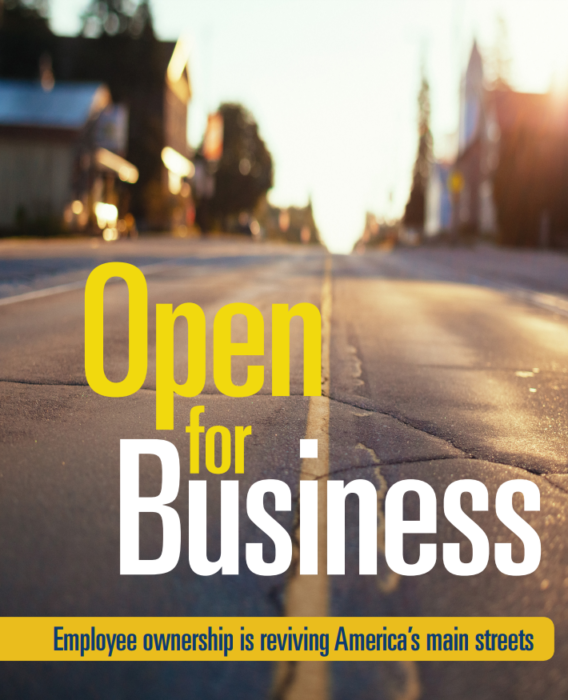 The road toward conversions

“Every year 150,000 to 300,000 businesses owned at least in part by boomers become candidates for employee takeovers as their owners hit retirement age. That means that over the next 15 years, retiring boomers could help create two to four million new worker-owned businesses nationwide.” — New York Times

There are 2.3 million privately held businesses owned by baby boomers in the U.S., representing 24.7 million jobs and 5.14 trillion in sales.1 As these owners retire, we will see a “silver tsunami” of businesses that will transition in ownership—what will become of this opportunity? The Main Street Employee Ownership Act has positioned worker ownership to be the answer to this crisis, and the work has only just begun. As with any legislation, the bill is only as good as its implementation, which needs to happen at every level.

August 13, 2018 was a landmark day in the worker cooperative movement. The Main Street Employee Ownership Act became the first ever federallevel legislation to focus on worker cooperatives; moreover, it was the first employee ownership bill in more than twenty years. While this has been cause for celebration, we know that in order to truly see economic change that will have lasting effect, there needs to be a multi-faceted approach toward implementing the bill, and coordination among all of our partners. From worker-owners sharing their experiences and supporting each other across businesses and cooperative developers supporting those businesses with technical assistance to funders delving into creative methods of investing in democratic businesses, there are roles for each of us to play. The worker cooperative model has been gaining traction in recent years, and it is vital to use this moment of opportunity as a springboard into action.

Worker co-ops transcend ideological and partisan divides, with 74 percent of Democrats, 72 percent of Republicans and 67 percent of Independents opting for the employee share ownership model.

The need and the climate

“Americans disagree about a lot of things, but this is not one of them,” said Beyster Distinguished Professor Joseph Blasi, Director of the Rutgers Institute for the Study of Employee Ownership and Profit Sharing. “Democrat or Republican, female or male, black or white, union or non-union, a majority of respondents said they prefer to work for a company with employee share ownership. It is rare to find such a national consensus on anything.”

As the 2020 elections gets underway, candidates from local city councils all the way up to the president search for opportunities for bipartisan support. Worker ownership is centered around the idea of creating stable, empowering jobs, and is one of the few areas in which legislators agree. A survey from the National Opinion Center at the University of Chicago, led by Joseph Blasi, Douglas Kruse (Rutgers), and Richard Freeman (Harvard), adds insight through its canvassing of 1,500 working Americans, in which they found:

These findings align with the sponsorship of the Main Street Employee Ownership Act itself, in which the Republican chairs and Democratic ranking members of the Senate and House Committees on Small Business co-sponsored the bill.

Leadership at all levels and all sides of government are waking up to the benefits of worker cooperatives and their ability to create stable, empowering jobs, and we must be ready.

History shows that the Employee Retirement Income Security Act of 1974 resulted in rapid growth in Employee Ownership Stock Plans (ESOPs), giving almost 2 million workers control of about $255 billion in ownership assets over a period of just 30 years. The combination of bipartisan support and the lessons learned through the trajectory of ESOPs over the past 45 years provides a ripe ground for worker cooperatives to see an explosion of not just interest but also stable, democratically governed businesses.

So what’s next? This uptick in worker co-ops can only happen if the cooperative community both ensures that the directives of the Main Street Employee Ownership Act are followed through, and is also ready with the infrastructure needed to respond to interest.

Working together is not just preferable; it’s critical.

A key piece of the Main Street Employee Ownership Act is the direction to the Small Business Administration (SBA) to work with lenders, the cooperative business community, and other relevant government agencies to develop practical reforms to make lending more accessible to all eligible cooperatives. As the first actionable item within the bill, and the one that dictates the availability of business development funds to cooperatives, it is vital to ensure that the cooperative business community plays a leadership role in developing the guidelines for accessibility.

The U.S. Federation of Worker Cooperatives (USFWC), along with its partners, has sought out insights directly from worker owners, lenders and developers to inform the guidelines that the SBA will develop. While the federal government shutdown earlier this year delayed this phase of implementation, there has been a quick turnaround from the SBA in hosting listening sessions to hear directly from experts in the cooperative field. Originally scheduled as two in-person sessions in Washington, DC and Kansas City, several organizations including the USFWC and NCBA CLUSA advocated for and secured a conference call in lieu of the Kansas City listening session so that participants from across the country could share their stories and listen in. In its comments, NCBA CLUSA highlighted the critical needs that co-ops meet in their local economies and examples of successful alternatives to the longstanding personal guarantee requirement for SBA loans.

One of the great benefits of the cooperative movement is our willingness to share ideas, collaborate and learn from each other. We leveraged the opportunity in preparing for these listening sessions to build the kind of rapid response infrastructure that we need in order to make the most of the sessions and future knowledge sharing. Partners including NCBA CLUSA, National Cooperative Bank, CooperationWorks!, the Cooperative Fund of New England, Democracy at Work Institute and more came together to compare testimonies, iterate ideas and gain alignment around recommendations in order to inform cohesive messaging. As we continue to track the implementation of the Main Street Employee Ownership Act, it is vital to continue collectively thinking through best practices, challenges and opportunities to advance the cooperative movement.

Many organizations, one goal

While we work in tandem across organizations, each piece of the worker co-op movement has its own role to play and its own mission to fulfill. Though the Main Street Employee Ownership Act passed only last year, we see not only the growth of existing initiatives, but also the seeding of new projects to support the conversion of traditional businesses to the worker co-op model.

“What we see really effectively support and amplify worker co-op development and the strength of those ecosystems are the policies that drive the businesses themselves, and the ecosystem of support around those businesses,” said Esteban Kelly, executive director of the U.S. Federation of Worker Cooperatives. “[That includes] technical assistance providers, city policies that offer grants and funding to directly finance that work, technical service provision, legal services—even the bookkeeping and backend business support.”

As the only national grassroots membership organization for worker cooperatives, listening to and lifting up the voices of worker owners is central to the work of the U.S. Federation of Worker Cooperatives. Our Policy and Advocacy Council meets monthly to share progress, prioritize policy work and develop opportunities for the cooperative community to become advocates to their elected representatives. As the membership organization representing worker co-ops and democratic workplaces, the USFWC organizes through local cooperative networks while building power with national and international partners like NCBA CLUSA to advance economic justice, rooted in community-based, shared ownership. We both listen to our members and put that feedback into action, working with legislators to answer questions, providing insight on proposed bills, and sharing the successes and challenges of worker co-op businesses. While the Main Street Employee Ownership Act is the beginning, the USFWC is monitoring the pulse of opportunities from local policy all the way up to the federal level.

In September—a month after the legislation passed—NCBA CLUSA, the USFWC and their partners submitted a letter to the SBA pledging to partner with the agency to accelerate implementation of the law.

There are several additional organizations, both national and regional, that are active in leveraging the Main Street Employee Ownership Act to spread worker ownership and democratic governance. The Northwest Cooperative Development Center, a partner in the recent Western Worker Cooperative Convening in Olympia, Washington, is also spearheading an initiative called the Legacy Project, which engages small business advisors located in rural communities about worker ownership. Focusing in on these trusted advisors, and working with organizations like the Washington State Grange and the Affiliated Tribes of Northwest Indians (ATNI), the Legacy Project is hosting events in Washington, Oregon and Idaho to build networks and expertise around cooperative development.

Continuing on an already impactful trajectory, the Workers to Owners Collaborative works to catalyze a wave of business conversions to cooperative employee ownership, developing scalable models and implementing pilot projects, developing tools and standards, researching potential markets and troubleshooting existing barriers. As of the third quarter of 2017, that collective has explored 217 business conversions, completed 21 conversions and transferred more than 8 million in business assets from retiring owners to employees. The collaborative, organized by Democracy at Work Institute and made up of organizations like the Center for Community Based Enterprise in Detroit, Shared Capital Cooperative and the Ohio Employee Ownership Center, has developed a strong baseline of information gathering which provides the data needed to present a strong case for conversions. Visualizations like Project Equity’s map of baby boomers nearing retirement provide the common understanding needed to put this potential crisis into focus, and illustrate the opportunity for worker ownership to strengthen the nation’s economy.

When we entered 2017, our core policy and advocacy strategy was to focus on state and local initiatives. What we learned is that the wider national consciousness is awakening to the potential of worker cooperatives as a solution for the businesses with retiring owners across the country, and that legislators are hungry to know more. Leadership at all levels and all sides of government are waking up to the benefits of worker cooperatives and their ability to create stable, empowering jobs, and we must be ready.

Mo Manklang is communications director at the U.S. Federation of Worker Cooperatives. She also leads policy efforts at the federal level and works with federation membership on state and local initiatives. Mo is a founding board member of the Philadelphia Area Cooperative Alliance, the Media and Marketing Committee of the Kensington Community Food Co-op and Policy Committee of the Sustainable Business Network.

A global legacy of selfreliance and stability

It’s time to fund the demand for local ownership