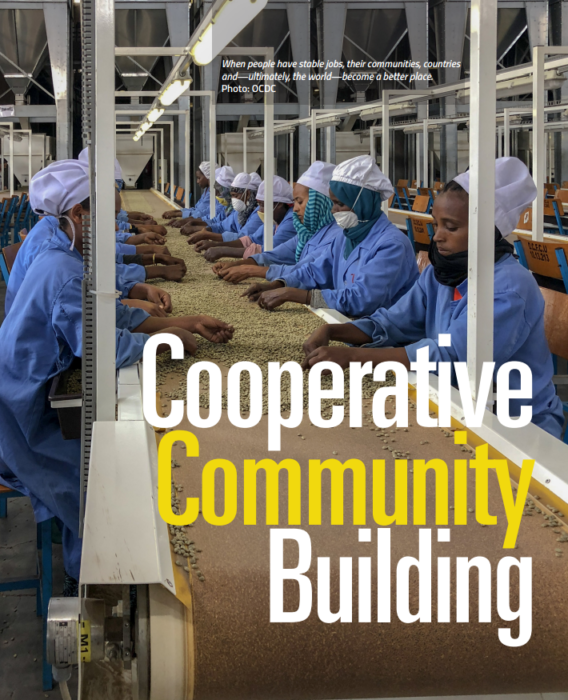 A global legacy of self-reliance and stability

Forty-two percent of the world’s poor rely on livestock for their livelihoods. Market access is a crucial link for improving incomes among agricultural smallholders, like Teger Gadi from Rwanda. For years, he’s been a member of CMO Dairy Cooperative, one of six dairy co-ops in his area. But there was no collaboration between the co-ops and no milk collection centers, driving each co-op to find its own markets and resulting in lower prices for smallholders.

Each improvement along the value chain has generated more success for Uprocenya and more income for its dairy farmer members. In turn, that success has brought about an economic turn toward self-reliance for many families in the region. Teger, who now chairs Uprocenya, puts it best: “People are shifting from personal farming to professional farming.”

Teger’s and Uprocenya’s experience demonstrates how CDP acts as a catalyst for sustainable cooperative development, transforming the lives of co-op members worldwide by bringing stability to their livelihoods.

With CDP grants as a catalyst for sustainable development, OCDC members have drawn on their extensive experience — delivered by their own members and staff—to create sustainable co-ops around the world. These are just a few examples of the program’s impact:

To provide reliable access to health care in underserved regions of the country, HealthPartners—with CDP funding—has established health-care cooperatives that reach more than 46,000 members. Among their efforts has been supplying bed nets to combat mosquito-borne illnesses such as malaria and Zika.

GENEX leveraged more than $95 million to invest in cattle cooperatives. With these investments, co-ops are increasing their members’ dairy and beef production and quality through improved genetics and herd management skills, which, in turn, generate higher incomes for producers.

With assistance from CDP-funded projects implemented by NCBA CLUSA, cooperatives in the country now sell spices and flavorings to major U.S. companies like McCormick & Company, and South America coops market their products to food cooperatives throughout the U.S. 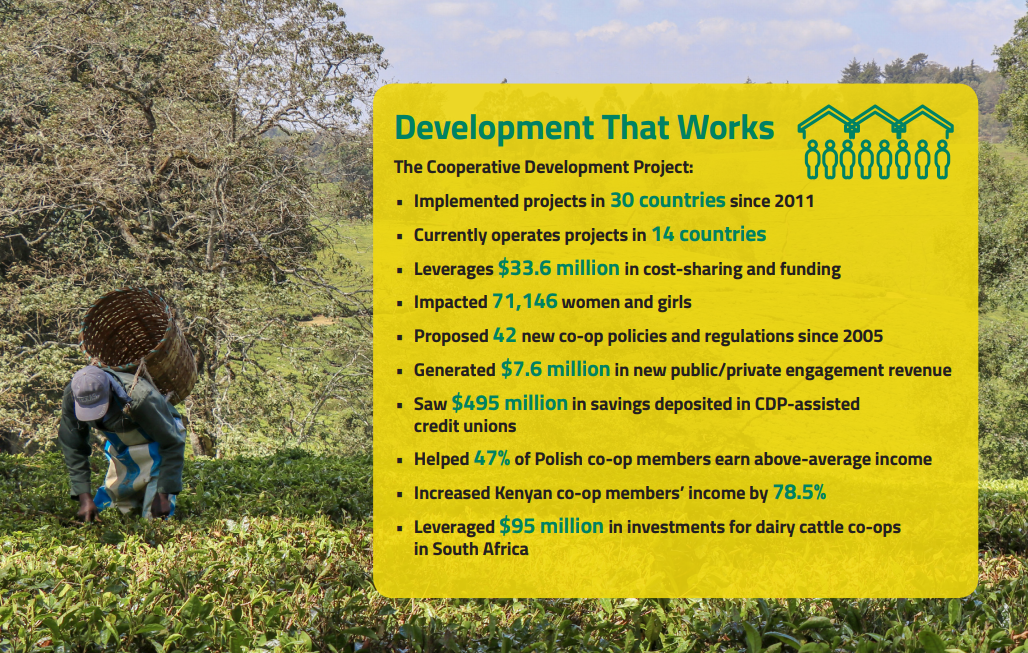 A call for co-ops

With the passage of the 1961 Foreign Assistance Act, a bipartisan group of members of Congress recognized the role cooperatives can play in building a more prosperous, peaceful and secure world. Congressional members had already seen the impact co-ops had on economic development in the U.S., particularly in rural areas. Not only did co-ops bring market access, production know-how and local ownership to farmers, they also brought services like electricity, finance and telecommunications to farflung corners of the country.

CDP is the only foreign assistance program dedicated exclusively to co-ops. It’s funded through the State-Foreign Operations and Related Program Appropriations Bill which, for more than 60 years, has had widespread, bipartisan support.

In the early 1960s, the U.S. Agency for International Development (USAID) encouraged the creation of an alliance of U.S. cooperatives—representing sectors from credit unions to agriculture—to implement programs funded by CDP. In 1982, the alliance was named the U.S. Overseas Cooperative Development Council (OCDC).

In many parts of the world, outmoded legal systems are barriers to cooperative development. To address these barriers and help create a legal and regulatory environment that enables co-op businesses to flourish, OCDC created the Cooperative Law and Regulation Initiative, or CLARITY, with support from CDP.

CLARITY developed four reports focusing on principles for reform, assessment, analysis and outreach, and ways the principles can be applied. The reports are supported by workshops, lectures and additional tools and materials for cooperative movements as they work toward legal reform. Since 2005, 42 enabling laws or regulations have been drafted using the CLARITY approach.

How effective are cooperatives launched through CDP funding? What impact do they have on their members and the communities they serve? What best practices lead to sustainable, selfreliant, effective organizations? The International Cooperative Research Group, created by OCDC, carries out international cooperative research focused on these issues to bridge the gap between theory and practice.

An examination of the difference cooperatives have made in Poland has already been published. Among the findings were:

Similar studies are underway in Kenya, the Philippines and Peru.

Promoting self-reliance and sustainability through co-ops

As a U.S. foreign economic assistance program, CDP has achieved tremendous success—on a modest budget of just $12 million annually—as a catalyst for laying an effective base for widespread and sustainable international cooperative development.

An independent evaluation recently commissioned by USAID revealed that the CDP generates consistently positive outcomes that align closely with the agency’s priorities, providing good value, given the program’s size.

Cooperatives are community-based, democratically governed private enterprises that bring people together to meet their mutual needs. They build open markets, provide local jobs and help alleviate poverty by bringing minorities, women and the poor into the mainstream economy. Through cooperatives, members achieve economic independence and address social goals, such as improved access to healthcare and education.

When people have jobs, they can feed their children and experience an overall better life. Their communities, countries and—ultimately—the world become a more stable place. As a proven approach to cooperative community building, the Cooperative Development Program builds the global foundation for self-reliance and sustainability.

Paul Hazen is executive director of the U.S. Overseas Cooperative Development Council, where CDP funding fuels global work in the areas of agriculture, finance and health. One of his most recent initiatives with OCDC is the formation of its Research Group, which has a mission to research, articulate and share effective strategies for the development, performance and growth of cooperatives in developing countries. Prior to joining OCDC, Paul served as president and CEO of NCBA CLUSA, an OCDC member.

A global legacy of selfreliance and stability

It’s time to fund the demand for local ownership