Who owns a business determines the type of entity it is. When an individual owns and operates a company, it’s often a sole proprietorship. When two or more people own a company, it’s often a partnership. A company can incorporate, forming a corporation that is owned by fewer than 100 people (an S-corp) or hundreds or even thousands of people (a C-corp).

When the people who use the products and services a company has to offer own and operate the company, it’s known as a cooperative. Aside from the ownership structure, there are a few other distinct features that set cooperatives apart from other types of business.

What Is a Cooperative?

The International Co-Operative Alliance defines a cooperative, or co-op, as “an autonomous association of persons united voluntarily to meet their common economic, social, and cultural needs and aspirations through a jointly-owned and democratically controlled enterprise.” In other words, cooperatives are created by people who have a specific need and who are willing to work together to operate and organize a company that will meet that need.

How Does a Cooperative Work?

To an outsider, a cooperative might look very similar to any other type of corporation. For example, if you were to visit a grocery store cooperative, it is very likely that it will look like any other grocery store. There will be aisles full of food and checkout registers where people can make their purchases.

But if you were to look more closely, or take a peek behind the scenes, you’d be likely to notice that the food co-op operates slightly differently from a typical grocery store. For one thing, it’s likely that the people who are members of the cooperative, or part-owners of the co-op, are also working at the co-op, stocking the shelves and ringing customers up at the register.

For another thing, some cooperatives limit who can shop there or use their services. In some cases, only members of a cooperative can shop at it. Some cooperatives are open to all, but provide special incentives to members, such as a discount on products or services.

Why are people who are members of a food co-op willing to volunteer or donate their time to work at the co-op? In part because of the community focus of a cooperative and the values behind co-ops. Among those values are:

People who join cooperatives or who are among the founding members of a co-op often have the same shared values, meaning they are willing to work together towards a common goal. One of those goals is to create a better world by working together and by shifting the focus of the business to place people over profit to build a more inclusive economy.

Just as the stockholders or shareholders of a business have a say in the ownership and operations of a company, the member-owners of a co-op have a say in how the cooperative operates. The crucial difference is that in the case of other types of corporations, the size of their ownership stake affects how much of a say or how much control an owner has over the company. A shareholder who owns 50% of a corporation will have more votes or more control over the operation of the company compared to a shareholder who owns 2% of a corporation.

That’s not the case with a co-op. As equity and equality are among the founding principles of a cooperative, each member-owner of a co-op gets one vote. The opinion of one co-op member does not have more weight than the opinion of another co-op member.

Cooperatives often elect a board of directors. The responsibilities of the co-op board include ensuring that the cooperative is working towards achieving its mission, setting up operational policies for the co-op and hiring any outside managers or other employees.

Members of a co-op’s board are members of the cooperative itself. They are typically elected to the board by a member vote. Some board members also serve as officers, such as president, vice president, secretary and treasurer. Board officers have additional responsibilities and duties, which members can find in the cooperative’s by-laws.

What Types of Co-ops Are There?

Cooperatives can be large or small, can exist in a range of industries or sectors and can take multiple forms, based on who the member-owners of the co-op are. A few examples of cooperative types include:

A cooperative business can operate in nearly any industry or sector, but you are more likely to see co-ops in the following areas:

Agricultural co-ops have been in existence for centuries. In early agricultural cooperatives, members pooled their resources to help farmers secure land and supplies. Today, more independent farms are beginning to work together to achieve long-term success. Some examples of agriculture cooperatives include Sunkist Growers Inc. and Tillamook County Creamery Association.

Insurance co-ops function in two ways. The first is through cooperative insurance that fully covers all co-op members. The second is through insurance companies that apply the co-op business model. With the cooperative business model in place, organizations such as the National Association of Mutual Insurance Companies and the International Cooperative Alliance can focus on policyholders to provide full coverage at a reasonable cost.

Financial services co-ops such as a credit union help to strengthen the economy by granting account members ownership over the financial institution. Account members receive the revenue they earn as owners through higher dividends, fewer fees and low-interest rates. National and international organizations such as Credit Union National Association and World Council of Credit Unions work to promote the mission of cooperative financial institutions.

In a grocery co-op, the customers are the owners and can purchase shares to participate in decision-making and receiving profits. However, everyone is welcome to shop at a grocery co-op without being a member. Grocery cooperatives help their communities by giving money back to the local community through their employees, members and neighbors. Examples of grocery cooperatives include National Co-op Grocers and the Neighboring Food Co-op Association.

Education co-ops exist at the early education levels all the way up to undergraduate programs. A preschool education cooperative allows parent members to determine policies and serve on committees to reduce costs. Many universities, such as Cornell University, also offer a co-op education program where students gain professional experience for course credit.

Healthcare cooperatives do not pursue profit to help patients save money on their medical bills and insurance. As more patients join a cooperative healthcare plan, the cost spreads out among more members, and the amount each patient has to pay goes down. Healthcare co-ops exist worldwide, and many cooperative alliances such as Cooperatives for a Better World work to support and defend the co-op business model.

In many major cities, housing co-ops are apartment complexes, single-family homes, mobile home parks or student housing that empowers people with homeownership and responsibility. Each resident is a stakeholder with a particular focus on the needs and interests of the group. Many U.S and international associations advocate and promote housing cooperatives such as Co-operative Housing International.

Utility and energy co-ops help local communities by managing public services such as electricity, water and telecommunications. Each member is a shareholder and can express an opinion about the governance and delivery of services. Examples of utility co-ops include organizations such as A&N Electric Cooperative and Basin Electric Power Cooperative.

What Is the Purpose of a Co-Op?

Why do co-ops exist? The purpose of a cooperative is to realize the economic, cultural and social needs of the organization’s members and its surrounding community. Cooperatives often have a strong commitment to their community and a focus on strengthening the community they exist in or serve. When a co-operative does well financially or economically, the community served by the co-op benefits, not just a small group of shareholders.

Co-ops offer multiple benefits to their members and the community around them. From a business point-of-view, cooperatives offer their members the benefit of limited liability. If the co-op should have financial difficulties or accused of wrong-doing, the individual member-owners are not personally responsible for the problems faced by the cooperative.

The structure of a co-op means that it can transfer shares from one owner to another. If a member moves out of the area, dies or no longer wants to be part of a cooperative, they can sell their stake or membership in the co-op to someone else. The cooperative itself will survive even once all of the original members have moved on.

From a social justice and democratic point-of-view, cooperatives matter today because they help to rebalance power and dilute the concentration of wealth. In the U.S., the wealthiest 1% of households have more wealth than 90% of households. The cooperative model creates shared prosperity, allowing more people to participate in the economy. Instead of a few people owning the bulk of every business, ownership resides with the people.

As the cooperative model uses the concept of “one member, one vote,” it also helps to level the playing field. People don’t get to have more of a say or more power simply because they happen to own a more significant portion of a company.

The Benefits of Cooperatives

Among the measurable benefits and areas of impact are: 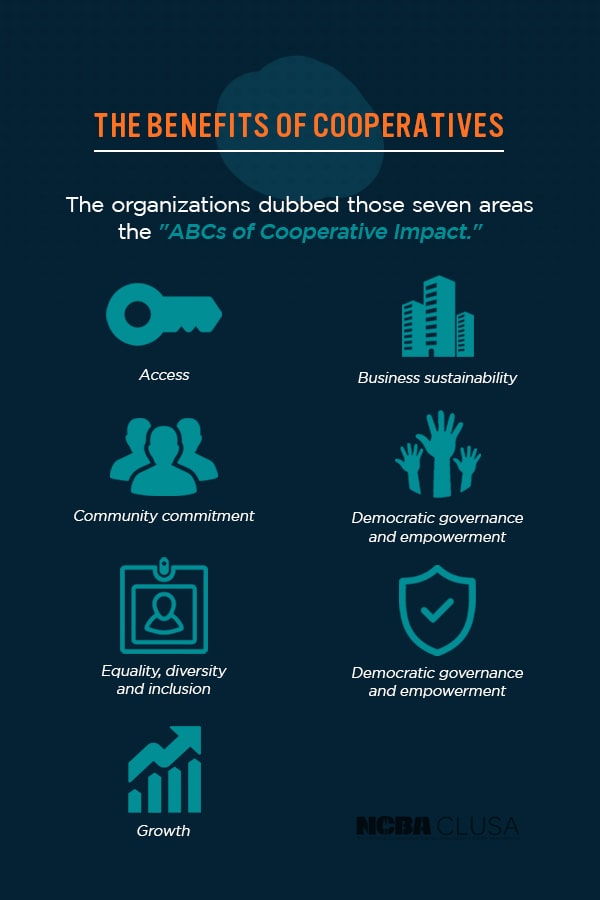 THE STATS ON CO-OPS IN THE UNITED STATES

Around the world, there are about 3 million cooperatives, and about 12% of the human population are members of a co-op. About 10% of the world’s population, or around 280 million people, are employees at co-ops. In the United States, there are around 65,000 cooperative establishments, and one out of every three people is a member of a cooperative.

The number of co-ops in the U.S. varies by sector and type. For example, there are between 300 and 400 worker-cooperatives in this country. Worker co-ops employ around 7,000 people and produce in the neighborhood of $400 million in annual revenue.
In the financial services sector, there were more than 5,500 federally insured credit unions in the U.S. at the start of 2018. More than 112 million people were members of a credit union during the first quarter of 2018, and nearly 5 million people joined a credit union during that time.
Another popular type of cooperative in America is the grocery store co-op, and there are between 300 and 350 retail cooperatives in the U.S.

Grocery cooperatives considerably impact their local economy, as many offer products from local farmers and producers. Locally-produced products make up about 21% of sales at grocery co-ops, compared to less than 2% of sales at supermarkets and grocery stores. Grocery co-ops are also more likely to give back to their community, particularly in the form of food donations. In 2016, co-ops donated more than 1.5 million pounds of food.

NCBA CLUSA aims to advance, protect and develop cooperative enterprise. We’re happy to answer any questions you have about cooperatives and about the work we do to advocate for co-ops worldwide. Contact us today to learn more. You can also join us as an individual, cooperative or associate member to help promote the work we do and the cause of cooperatives across the United States and around the world.