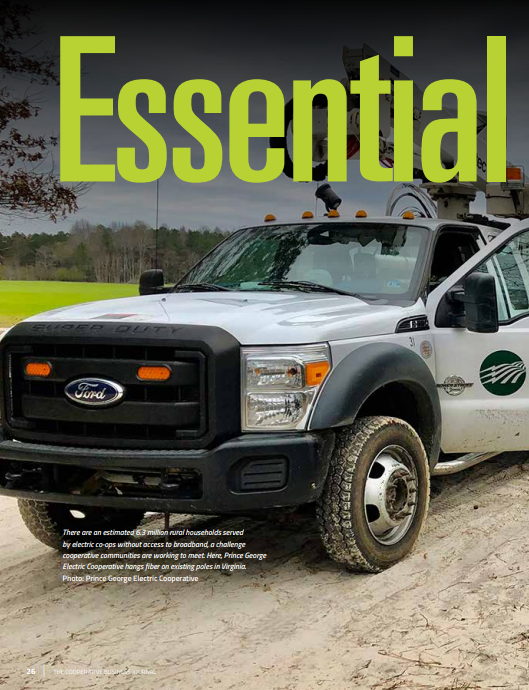 By Russell Tucker and Mike Sassman

Electric cooperatives, which provide service to much of rural America, quickly took action to support their communities that have been hit hard by COVID-19. At the height of the pandemic, supply chain disruptions impacted agriculture and manufacturing, while employment in the service sector declined due to stay-at-home orders. As furloughs and lay-offs mounted, many residential consumer-members struggled to pay their bills. Moreover, as schools shifted to distance learning, many students were on the wrong side of the digital divide, without access to the broadband communications required for remote learning.

COVID-19 pandemic shutdowns were particularly hard for family-owned dairy farms. Their losses began early as schools and restaurants closed. Losses worsened when processors saw sales stall and inventories stack up, causing prices to collapse. Electric distribution co-ops in Wisconsin had already canceled their annual meetings due to social distancing concerns, so funds that would’ve otherwise been spent on the meetings were repurposed to support their communities. A coupon program was developed to provide co-op members with a free gallon of milk at the outlets of a participating statewide retailer. This helped families stretch their grocery dollars while the total impact of purchasing 120,000 gallons of milk helped draw down some of the surplus, providing market support to dairy farmers as well. In addition, Dairyland Power Cooperative, the electric generation and transmission cooperative in Wisconsin, provided 2,500 gallons of milk to food pantries in their service area to help expand the milk giveaway promotion.2 In eastern Oregon, the pandemic caused more harm to an already weak timber industry. Regional manufacturing was also adversely impacted as supply chain delays and social distancing requirements in the workplace reduced production. Electric sales to local industries fell 20 percent, an indicator of a sharply declining economy. At Oregon Trail Electric Cooperative (OTEC), there were 10 times the normal rate of overdue payments as members struggled to pay their bills. Like most co-ops, eastern Oregon-based OTEC suspended service disconnections and late fees during the pandemic.

At Roanoke Electric Cooperative in Aulander, North Carolina, the unemployment rate increased as service sector jobs were lost in restaurants, barbershops and salons. In May, the co-op reported that unpaid electric bills increased 50 percent in one month’s time. The co-op, which serves one of the poorest areas in the nation, waived the penalties and late fees that it normally charges. The co-op’s board of directors also voted to retire about three times the amount of capital credits it normally would, providing $1.5 million in refunds to members to help them pay their bills. “It’s important that the co-op play a major role in trying to help them get through this,” said Curtis Wynn, Roanoke’s president and CEO.

Consumer-members give high marks to their electric co-ops

In September, NRECA and Touchstone Energy® Cooperatives released the “National Co-op Member COVID-19 Response Study.” NRECA Market Research Services surveyed more than 7,000 consumer-members from 20 electric co-ops across 10 regions in June and July—after these areas began to lift lockdown restrictions. The study sought to measure how member-consumers viewed their co-op’s performance during the height of the pandemic and their awareness of actions taken by their cooperative.

Consumer-members were asked about their overall perceptions of their electric co-op. There was overall satisfaction and agreement among members that their co-op’s name is a name that members can always trust (see Figure 1). Members also responded favorably to the statement that their co-op “looks out for the welfare of the community.” Moreover, members indicated strong confidence that their co-op would meet their needs during the pandemic recovery and during the next community crisis. Members know that their electric co-op is ready to manage its operations through a crisis, whether a storm-related outage or a pandemic-driven shutdown of the community.

Members were also asked to evaluate nine performance quality attributes, keeping in mind the recent events related to the COVID-19 pandemic. All of the attributes received ratings well above 8 on the excellent range. Co-op business continuity practices likely led to a member perception of “business as usual” during the pandemic, as electric co-ops did what their members expected of them. One attribute that consistently rated lowest is “seeing members as an individual rather than just a number.” While overall the rating is good, this area provides the greatest opportunity for improvement. 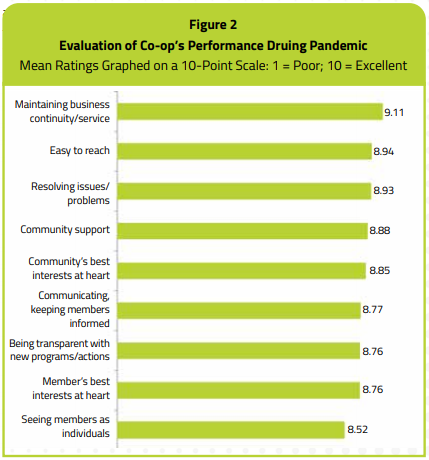 Electric co-ops took numerous actions to assist their members at the height of the pandemic. The survey identified 12 actions taken among the coops, such as closing lobbies to the public, suspending service disconnections, and waiving late payment fees (see Table 1). Each of the 20 co-ops took at least four of the actions. On average, each co-op took seven actions.

While about six in 10 members said they knew of at least one of these actions, other efforts went largely unnoticed (see Table 1). Despite high overall approval ratings for their electric co-ops, responses indicate that members were not aware of all of the actions their co-op was taking to mitigate the strain of the pandemic. Members received pandemic-related information from co-ops mostly via email, but other popular communications methods included print publications and bill messages and inserts. Going forward, constant communication through all possible channels is key to improving awareness of co-op actions.

As schools shut down to lessen the spread of COVID-19, many adopted virtual, long-distance learning as a substitute for in-classroom instruction. Students residing in areas without broadband access were disadvantaged and at risk of falling behind. To counter this threat, many electric co-ops with retail broadband enterprises are keeping their members safely connected with free Wi-Fi hotspots in the parking lots of schools, churches and restaurants. Students can connect to do schoolwork from the safety of their own vehicles as parents surf the web to meet their own needs. For example, Barry Electric Cooperative in Missouri set up free Wi-Fi at three high school parking lots that comes with parental control software to provide added safety for kids. The co-op’s broadband subsidiary, goBEC Fiber Network, is also working with low-income referrals from a local community agency that received federal CARES Act funds for broadband. The co-op plans to provide internet service at a discounted rate to help make the funds go further.

Other electric co-ops are helping turn school buses idled by the pandemic into smart buses equipped with Wi-Fi hotspots. OzarksGo, a subsidiary of Ozarks Electric Cooperative in Fayetteville, Ark., worked closely with local school districts to create free Wi-Fi hotspots on school buses. Initially, buses were equipped with Wi-Fi technology by a school district for cellular internet connections and parked in areas convenient to families. However, this proved too expensive and slow for multiple users. The co-op stepped in to provide a superior solution through its fiber broadband network. The hotspots were connected to OzarksGo’s fiber optic network, with high-performance internet connections. 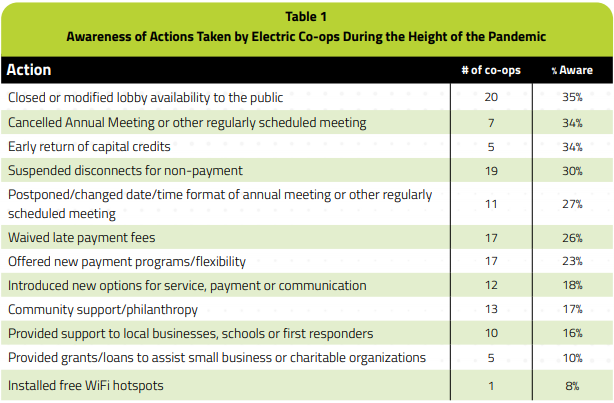 Overcoming the digital divide Many electric cooperatives across the country are examining broadband investment and partnerships in their communities. They are building broadband communication networks, a focus seemingly beyond their traditional service offerings. These networks enhance electric grid operations and member services, and bring much needed, high-performance broadband access to their communities. Building broadband is highly capital intensive and costly because of the low household geographic density of areas served by electric co-ops—eight member consumers per mile of line on average. In many cases, financial assistance is needed to help buy down the investment cost of expanding broadband to rural communities. Grants and loans from the U.S. Department of Agriculture and from individual state programs are an important source of capital. In 2018, for the first time, electric co-ops were allowed to compete in a Federal Communications Commission (FCC) auction for funds to expand rural broadband to unserved areas. Thirty-two electric co-ops won $255 million over 10 years to build broadband to 86,716 locations in 15 states.

This October, the FCC will hold another auction to bring broadband service to more than 6 million unserved homes and businesses in rural areas. A total of $16 billion will be awarded to support development over 10 years. To date, 190 electric cooperatives have signaled their intent to participate in the auction. With success, this could double the number of electric co-ops providing rural broadband to overcome the digital divide.