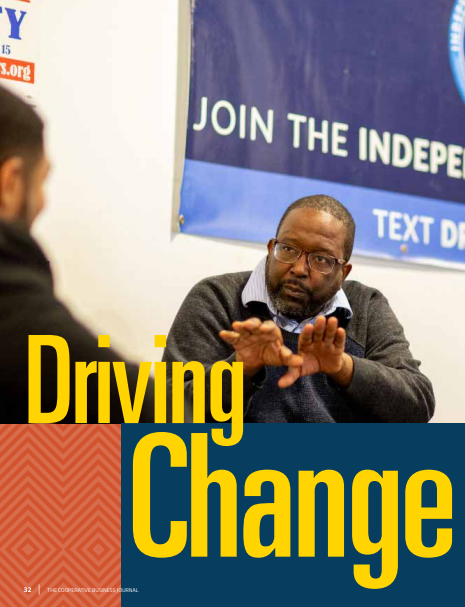 We are basically 100,000+ drivers around the city. How we can use that power, and how we can better our lot is important, because— to be honest—we have been taking a beating these last five years,” said Martin, an Uber driver for the past eight years, at a recent meeting of the Independent Drivers Guild (IDG). This union affiliate was launched by the Machinists Union (IAMAW District 15), a leading advocate for for-hire drivers in New York City for 20 years. Soon after the launch of Uber in New York City, the union began to recognize the negative impact that “gig-economy,” app-driven car services were having on wages and working conditions.

“When Uber came to New York City in 2011, it completely disrupted the industry,” IDG’s Education Director Erik Forman recalls. “Black car driving went from being a luxury, like transporting someone from the airport to an urban villa, to competing directly with the taxi sector.”

The number of black car drivers (e.g., limousines and town cars) in New York City exploded to 107,000. Companies like Uber marketed themselves as providing lucrative, fun and flexible part-time jobs that could pay $5,000 a month. In the face of scarce alternatives, app-based, black car driving was an attractive option for workers— including immigrants, people of color and those without college degrees.

However, the app-based driving companies had a secret: although a driver may be able to gross $5,000 per month, they were also responsible for covering their own expenses like insurance, fuel and vehicle repairs, which could total $3,000. Further compounding this is the fact that app-based companies cut driver pay and left often-indebted drivers without a way to pay their bills.

“The story that Uber told was a fairytale,” Forman said. “We had to address multiple pain points that these drivers were experiencing.” In 2016, the union created the International Drivers Guild as a way to represent the rights of app-based drivers. The guild now represents more than 85,000 for-hire vehicle drivers in New York City, 90 percent of whom are immigrant workers. “I’ve been an Uber driver for more than three years. I started out as a college student trying to make extra money on the side,” said Jackie, an IDG member. “What we are fighting for is better benefits, pay and security on the job.”

IDG turned to its own members for ideas to help app-based, black car drivers. Since drivers are the focus of IDG’s efforts, Forman and his team have taken their ideas, found resources and made them a reality. IDG has implemented a range of strategies to help improve its drivers’ lives.

The Independent Drivers Guild attacked this problem on two fronts. In 2016, IDG became the first union to negotiate a contract with an app-based company. IDG also launched a campaign to establish base pay for drivers in the city. After IDG mobilized supporters to petition City Hall and organized a caravan across the Brooklyn Bridge, New York City passed an ordinance guaranteeing a minimum wage for IDG’s members in February 2019.

“It was a tremendous victory, but we’re always looking forward,” Foreman said. “Now the app-based companies are tying to find ways around the regulations, so we’re trying to strengthen enforcement.”

Putting the brakes on a predatory system

The pay battle was only the first leg of a longer journey. There are a number of additional pain points to address: exorbitant rates charged by lenders and insurance companies, repair shops that gouge drivers and other expenses. The group is also working to be a leader in setting environmental standards for their vehicles. IDG is working to build a brighter future for its members and transform the sector, improving working conditions while becoming more environmentally friendly. But addressing so many issues simultaneously has proven expensive. The need to cut costs yet boost driver pay inspired a new idea: working with IDG members to form a cooperative.

Cooperatives are a unique, democratic business model in which the employees—or members—share an economic stake in and control of the business and are often guided by a concern for the common welfare. Their ability to mobilize their combined resources can be a real force for positive change.

With this vision in mind, IDG turned to Capital Impact Partners and applied for its annual Co-op Innovation Award.

Launched in 2015, the grant program was created as a way to invest in and support new or existing cooperatives that create economic opportunity for those who have long faced structural racism and disinvestment—especially communities of color and women. Grantees have leveraged their combined $300,000 in awards to secure more than $2.9 million in additional funding from foundations, investors and government programs.

“We had been exploring a way to use education to build the status of workers,” Forman said. “It fit really well with Capital Impact’s mission, and we applied for and received a grant in 2019 to help fund that initiative.”

The Co-op Innovation Award provided $25,000 to help the IDG members launch a purchasing cooperative as a means to make bulk purchases for key services as a way to get lower pricing from suppliers. For example, it is cheaper to buy 100 cars as a group then individually. By combining their needs, drivers can reduce expenses including dash cameras, car washes, fuel, oil changes and car repairs.

The purchasing cooperative will be the first step to build the organizational capacity and mass membership necessary to organize additional co-ops that require larger amounts of capital, including insurance, electric vehicles and an actual rideshare app that could compete in the NYC market. This project will be transformative for drivers, can be replicated in other cities and holds potential to break new ground for co-op development and the labor movement in the gig economy.

IDG driver Martin explained the importance of this effort: “This is really a minimum wage job, and the aim is really that if we can bargain to lower costs it means more money that stays in our pocket and more money for our families.”

And the innovation didn’t stop there. Another key concern for drivers is access to affordable, culturally appropriate “meals-on-the-go” to fit their busy lifestyle. To meet that demand, the IDG is also organizing a separate worker cooperative called the Drivers Cooperative Cafe. This new venture will further help to employ workers who are often only able to find low-wage jobs in the restaurant industry.

The Workers Lab joined with Capital Impact in 2019 to help expand the reach of the award to focus on key issues such as workers’ rights and asset creation for immigrant workers. In addition to IDG, the two other winners of the 2019 award included Centro de Trabajadores Unidos: United Workers’ Center and CLEAN Carwash.

“Both Capital Impact and the Workers Lab see real promise in the 2019 grantees as grassroots organizations that have adapted the co-op model to solve structural problems in their communities,” said Alison Powers, Cooperative & Community Initiatives Manager at Capital Impact. “In the worker co-op sector, 70 percent of members are people of color and women. They are leading the charge and demonstrating how co-ops can create equitable opportunities for those who face barriers to success in today’s economy.”

Independent Drivers Guild used the Capital Impact Award to hire an expert from Yale to analyze the cost structure of the for-hire driving industry. IDG has also built teams that include an instructor, a research fellow and a driver cooperative advisory council comprised of 24 elected drivers. Each team is tasked with evaluating an element of the industry, such as driving apps, vehicle purchases, insurance and service stations.

The collected knowledge of these teams will be compiled in a report on the best strategy for intervention. IDG has begun identifying discounts, establishing strategic partnerships and obtaining third-party financing as possible solutions.

“Our drivers are already economic experts in this industry,” Forman said. “It’s a great opportunity to put them to work and transform the political economy.”

This was a point reinforced by Martin. “All of the assets of this industry are actually owned by us. Uber owns none of it. Our vision is to take our fate into our own hands… and give the good customer service we are already giving.”