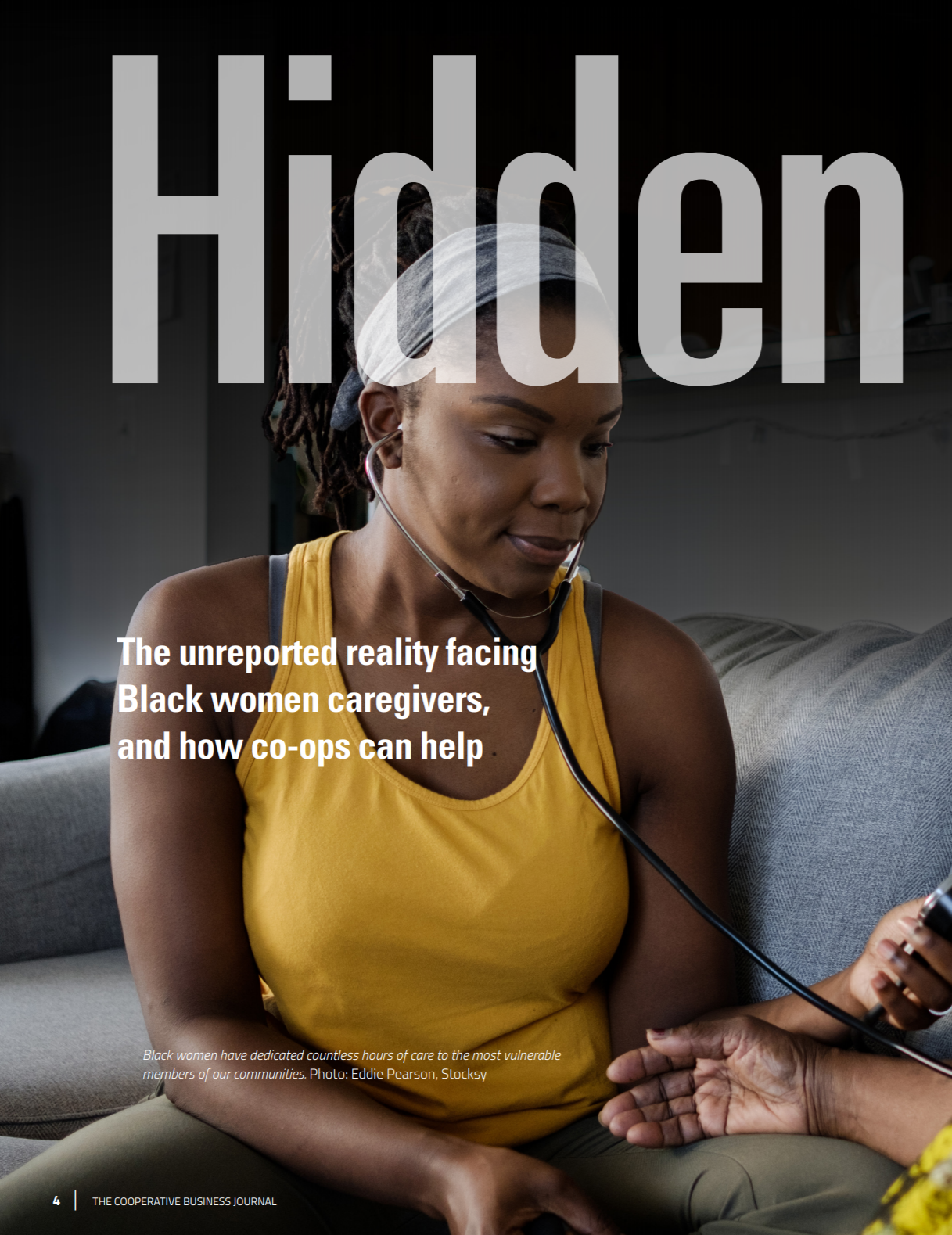 The unreported reality facing Black women caregivers, and how co-ops can help

By Kate LaTour with Tamela Blalock

The initial December jobs report released by the Bureau of Labor and Statistics resulted in troubling headlines. For example, CNN Business headlined “The U.S. economy lost 140,000 jobs in December. All of them were held by women.” But this doesn’t reveal the whole picture. The workforce overall saw 156,000 jobs lost. Men gained 16,000 jobs. Women lost 156,000 jobs. Of those 156,000 jobs lost, Black women lost approximately 82,000 jobs— accounting for nearly 60 percent of all job loss.

The Institute for Women’s Policy Research states that despite further job loss by Black women, the overall unemployment rate for this group decreased because many Black women have stopped looking for work. The Bureau of Labor and Statistics (BLS) describes this phenomenon as the discouraged worker, which is a regular occurrence across all demographics of workers in the U.S. The BLS does not include discouraged workers, marginally attached workers, underemployed workers or furloughed workers into its unemployment rate calculation; therefore, this population often goes ignored when economic solutions and policies are being created.

There are a multitude of factors that have contributed to this disproportionate economic impact on Black women, closely related to the pandemic’s disproportionate health impacts on Black women. A recent study showed that Black Americans are “nearly three times as likely to require hospitalization than white people” after contracting the Coronavirus, and “more than three to four times the rate of white people” to die from the virus. Higher rates of pre-existing conditions and higher rates of poverty are important contributing factors to these health inequities.

Socioeconomics isn’t the only factor, as systemic racial bias also impacts the quality of treatment, as demonstrated by Dr. Susan Moore’s story, in which a physician used Facebook to document the inequitable care she was receiving from the hospital where she worked. Black Americans are also more likely to have higher unemployment rates among all workers across all levels of education, including among workers with college and advanced degrees.

While we are eager to turn toward recovery, the nation is still working diligently to mitigate the pandemic. In this monumental task, Black women are more likely to hold frontline and essential jobs, as well as low-wage jobs, without paid time off or remote work options that put them face-to-face with the virus on a daily basis.

Nearly 85 percent of Black women are the primary or sole breadwinners in their households. Black women have experienced disproportionate layoffs in service jobs, and are disproportionately forced to choose between work and childcare during the pandemic. Without policy intervention, we risk irreparable setbacks to Black women in the workforce and their economic security for decades to come.

There is no policy that can singularly undo these disparities, and policymakers should explore many of them—and avoid past mistakes. For example, consider Social Security and New Deal programs. When created these programs had specific clauses that excluded Black Americans from eligibility from key elements including social security safety nets denied to at-home maids and childcare providers, and home loans for houses in the suburbs due to racial covenants.

But one place to start is implementing programs to empower Black women to capture ownership opportunities in the care economy through cooperatives. What is the care economy?

According to the International Labour Organization (ILO), the care economy is comprised of direct personal and indirect activities—both paid and unpaid—for example to children, the elderly and the chronically ill by providing services related to education, cleaning, and health and safety. Compared to their overall presence in the workforce, Black women are overrepresented in caregiving jobs.

Moreover, according to the American Association of Retired Persons (AARP), unpaid care accounts for $470 billion in economic value per year. Among unpaid caregivers, women account for nearly three-quarters of caregiving. And in ILO surveys, approximately 70 percent have said they would prefer having a paid job.

Yet again, Black Americans face disproportionate negative impacts. According to AARP, Black caregivers “have lower household incomes than white caregivers, but spend similar amounts of money on caretaking.” And with regard to unpaid work, 57 percent of Black caregivers spend an average of 30 hours per week providing caregiving activities. To add to the challenges, one-third of Black caregivers are part of the “sandwich generation,” providing care to both their parents and their children.

By lifting up Black women caregivers through cooperatives, we can also close economic gaps experienced by other socially disadvantaged groups. For example, Latinas and Indigenous women are also overrepresented in the caregiving workforce, and subsequently face similar challenges around low wages, difficult hours, unpaid care and severe layoffs during the COVID-19 pandemic.

According to Janelle Jones, Chief Economist for the U.S. Department of Labor, “Black women have experienced the steepest drop in labor force participation and have had the slowest job recovery since January 2020.” By implementing policies addressing the needs of the hardest hit sector of the workforce—Black women—Jones goes on to explain, we can achieve an inclusive recovery for all vulnerable workers and marginalized groups.

Even before the pandemic, the U.S. was facing an enormous shortage of care workers. By 2030, the U.S. is estimated to be short more than 100,000 caregivers. And according to PHI, direct care workforce “will outpace every other occupation in the country, adding the greatest number of new jobs in 38 states through 2026.” The increasing number of people who need care is undoubtedly a major reason for the shortage of workers, but it cannot be discounted that the shortage is attributed to these jobs being difficult, undervalued and underpaid jobs.

As a result, these jobs often see high workforce turnover, resulting in inconsistent, lower quality care for the most vulnerable community members. For example, in home care, traditional businesses see as high as 80 percent annual workforce turnover. Here’s where co-ops come into play. Black women continue to face structural and cultural forces—rooted in the enslavement of Africans and Black Americans and the resulting systemic racism built into both public and private governance—as caregivers. We all have a responsibility to research the policy, governance and operational norms that uphold these forces of inequality, and systemically dismantle them and rebuild intentionally inclusive policies, governance and cultural norms. In the service sector, a multitude of policies should be considered to create a level playing field for care workers, especially toward equal worker protections. Women—Black women especially—are often exploited in these service jobs as employees. Using the cooperative business model, workers become owners and are empowered to reap the coinciding benefits: more take-home income and a voice in business operations.

To avoid further consolidation of businesses and keep wealth local, conversions to cooperatives through a market-rate purchase by employees can be an important strategy for business owners, workers and people in need of care, alike. To incentivize these transactions, policymakers should consider tax advantages to retiring business owners who choose to sell their business to employees. Policymakers should also make sure workers have the tools in place to purchase access to capital, technical assistance to support feasibility studies and business formation, and education on cooperatives.

Because of longstanding regulatory challenges for cooperatives to access financing tools at the U.S. Small Business Administration (SBA) and a lack of institutional understanding of the cooperative business model throughout the network of Small Business Development Centers, Congress should consider a targeted grant program available to cooperative business developers and to the cooperative member-owners themselves to support the cost of purchase, acquisition of building space, and other tools to limit any economic hardship during the purchase. Further, Congress could consider a childcare co-op loan program that includes a forgiveness component. According to the Democracy at Work Institute, worker-owners at cooperatives typically earn nearly $20 per hour in wages—or about $13 per hour more than the federal minimum wage. Then, each year, patronage dividends are returned to the workers who created that profit. Moreover, in home care, we know that cooperative home care businesses have significant workforce benefits. While the sector hovers around 82 percent annual turnover, home care cooperatives enjoy annual workforce turnover of 38 percent. This translates to more consistent, higher quality care for patients, and an opportunity for workers to build caregiving and business skills that lead to a better employment trajectory down the road.

If home care cooperatives could reach a prominent scale, this would also position the federal government to support this people-powered business model by adding favorable scores to businesses competing for government contracts. For example, the Veterans Administration contracts with home care companies across the nation to provide direct care to veterans in need of assistance. This kind of partnership could provide mutual benefit to VA, the co-op and the veterans receiving high-quality co-op care.

There are several predominantly Black women-owned cooperatives in caregiving that we can turn to as sterling examples of success.

Queens, New York is home to A Child’s Place co-op. When the business’s owners, Linda and Gregory Coles, were nearing retirement after 34 years in business, they were intent on keeping the business— its jobs and service to children—rooted within their community. “One of the big things we lamented was, ‘When we sell the business, will the person who takes it on still carry on the same quality of business and mission?’” So, the Coles decided to sell their business to their employees, preserving about 70 jobs and care for more than 100 children.

Shivone Cumberbatch, a teacher at A Child’s Place, said that she always anticipated being part of the public or private school community, but, she said, “Given the opportunity to own my own school, it gives me the chance to learn how a company is run. It’s exciting.” Linda said, “It’s been nothing but a positive decision.”

In neighboring Bronx, Cooperative Home Care Associates (CHCA) provides direct care to seniors and people with chronic illness or disability. Beginning with just 12 home care workers, the cooperative is now the largest worker cooperative in the U.S., employing more than 2,000 people, of which approximately half are owners and the majority are women of color. Each year, CHCA provides workforce training to more than 600 low-income and unemployed women. And in 2012, CHCA was the first home care company to achieve B Corp certification, further cementing its commitment to considering all stakeholders in their business decisions.

More recently, in Madison, Wisconsin, Soaring Independent Cooperative formed in January 2019. Their website offers a glimpse into their co-op story: “As a group of women from the same community, we supported each other in multiple ways, including assisting with family caregiver duties for children, aging relatives, and individuals with physical and/or mental health disabilities. We unintentionally built a culturally competent network of support, empowering both skilled professionals and unpaid caregivers who understood the need and value of our work.”

These few examples are just glimpses into the potential of Black women-owned cooperatives. Black women have dedicated countless hours of care to the most vulnerable members of our communities, while barely scraping by for themselves and their families. Bringing dignity to the hard work of caregiving, and empowering Black women through cooperatives to build financial assets and govern their business is one way to support an equitable economic recovery that could have a lasting positive impact.

Kate LaTour is Director of Government Relations at NCBA CLUSA.

Tamela Blalock is Vice President of Cooperative Relations. NCBA CLUSA works to build a better world and a more inclusive economy that empowers people to contribute to shared prosperity and well-being for themselves and future generations.

The unreported reality facing Black women caregivers, and how co-ops can help.

People support cooperatives; Co-ops can too, with associations.

Policy strategies to build an inclusive economy with cooperatives.