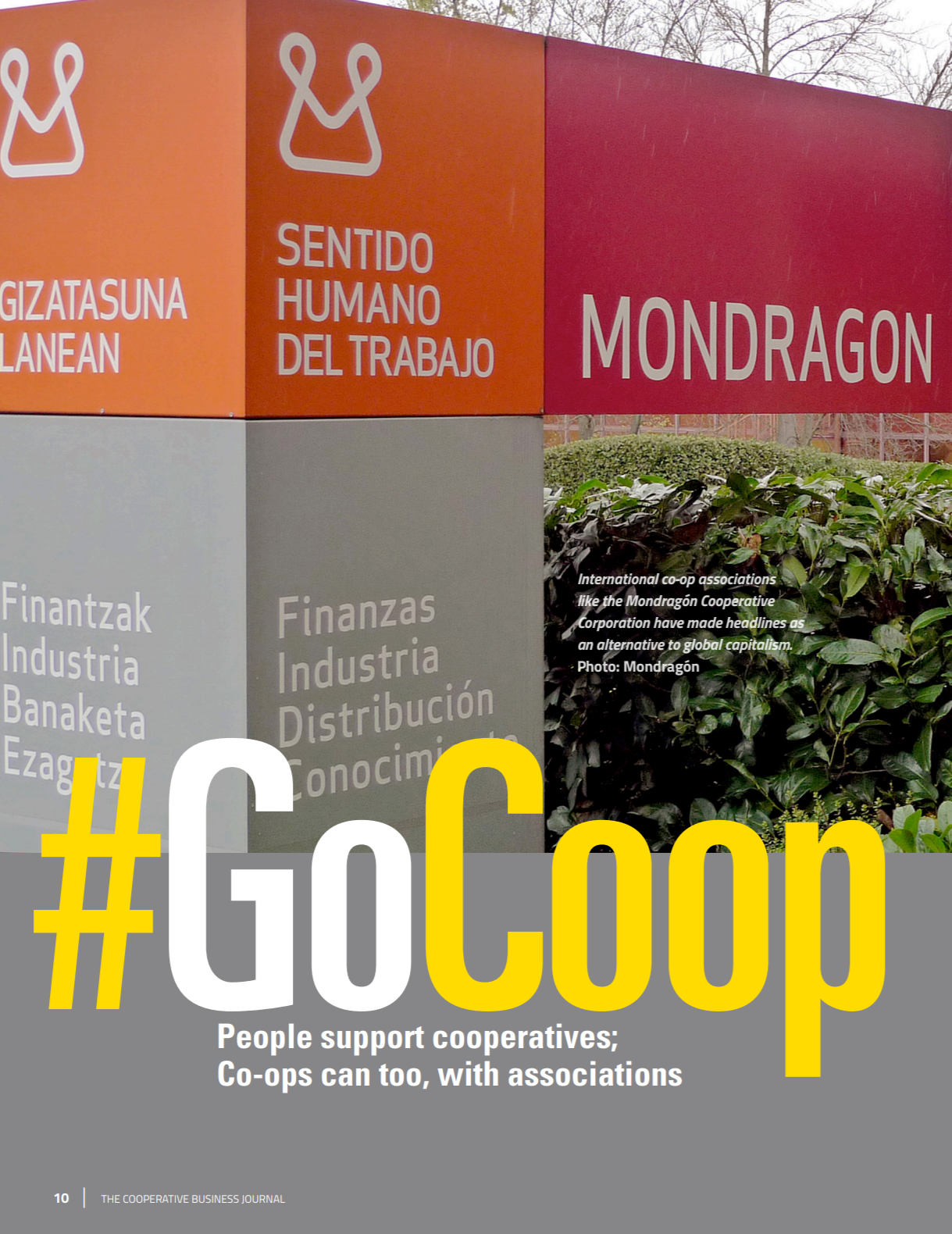 People support cooperatives; Co-ops can too, with associations

We often hear of Mondragón Cooperative Corporation and the cross-sector, clustered economic juggernaut of Italian cooperatives, especially in Emilia Romagna. The successes and advantages to members of our own domestic associations, however, don’t often make headlines.

Co-ops have to draw on all assets and resources to serve membership amidst competitors equipped with well-marketed, sugar-coated solutions driven by profit. Healthy foods, dignified jobs, safe housing, secure banking and sustainable agriculture— all once solely found in co-ops—are by now most certainly big business. The desire and the need for co-ops to empower transformational change have a significant impact in how co-ops are run, too, regarding race and gender inequities, climate change, widening wealth gaps, homophobia and other systemic issues.

Individual co-ops are critical to the survival and health of their members; however, one co-op alone cannot address these larger, systemic issues. In the U.S., the pandemic’s casualties are reaching half a million, and a (long overdue) reckoning with racism is being met with more violence and repression. Associations are showing that the values of equity, solidarity and democracy are real and are at the core of the cooperative business model. Associations are showing, too, that when cooperatives themselves work intentionally together, access and education improve, development and legislation strengthen, and partnerships and innovations flourish.

How can co-ops continue to take the lead in meeting economic, social and cultural member needs? What are the successes of associations in the U.S.? And if associations are so great, why aren’t more individual co-ops members?

Through interviews and data from ten associations in North America, we will explore how associations serve their members in a variety of ways. Fifteen interviewees are candid about what barriers they face and what successes they have as they build a list of potential “social innovations” to replicate.

Why talk about co-op associations?

The most important step in the history of the consumer’s movement, after the founding of the Rochdale type of society, was the setting up of federal organizations controlled, not by individual members, but by consumers’ societies. (Carr-Saunders, Florence and Peers, 1938 – Tom Johnstad )

Associations are hailed as having dynamic adaptability, providing a strategic advantage for innovation and longevity and using governance models that provide a more efficient manner of gaining input from cooperatives to create nuanced responses to complex issues. Internationally, data shows associations have positive impacts on life expectancy, decrease inequalities and can be transformational in the areas of environmental justice and societal health.

Associations have a history of uniting and serving communities of need. In her book, Collective Courage: A History of African American Cooperative Economic Thought and Practice, Dr. Jessica Gordon-Nembhard researched the Young Negro Cooperative League (YNCL). The YNCL featured youth and women leaders like Ella Jo Baker, who worked toward the “elimination of economic exploitation and the transition to a new social order.”6 There are countless stories about farmers, renters, unemployed workers, and other people who used cooperation among cooperatives to survive oppressive systems and build lives of which they were proud.

An important context of associations is how they create resources by responding to challenges in a way that maximizes the cooperative structure— like adhering to principles and cultivating member participation—instead of market-based solutions, like cutting wages and payments to producers. Researchers have called this dynamic “mimetic isomorphism” and this way, if a solution is found by one co-op or within the association, it can be replicated across other members and associations with trust and transparency. 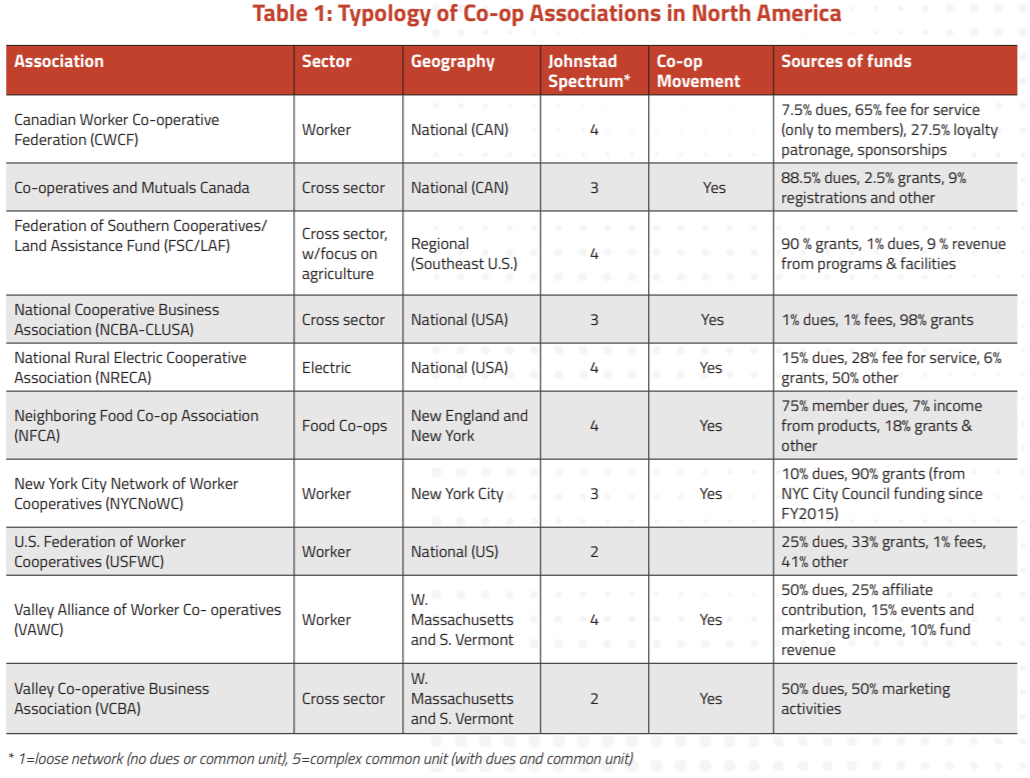 What do you mean, a cooperative association?

All associations in this research state that they are dedicated solely to cooperation and have co-ops as members. To assess the differences among them, I introduce a spectrum Tom Johnstad innovated. He shows how associations can be “looser alliances” with no central organization while others can require dues, and have staff creating their own “common unit.” In Table 1, I list core qualities including the sector(s) served, revenue sources, geographical service area and a Johnstad spectrum where “1” is a loose network and “5” represents an association with more participation from members and their own activities. I also indicate whether the association has a program that supports the coop movement as a whole in addition to their own sector or members.

Associations in this research show an inspiring range of resources and activities. Two associations had five members or fewer, while others have more than 1,000. Two associations had either no staff or part-time staff, while others had hundreds of employees. Annual budgets ranged from $5,000 to hundreds of millions of dollars and the member dues portion of revenue ranged from 1 to 89 percent. Density of membership—the percentage of all potential members in their service area who are members—ranged from 5 to 98 percent. Six of the ten associations studied were founded after the year 2000, with three associations surviving more than 50 years. The ten associations’ aggregated impact counts a total of 2,223 member cooperatives that employed 1,550 people and earned $304 million annually in 2018. Also in 2018, these associations allocated $2.8 million in patronage, $170,000 in charitable contributions and paid $511,000 in taxes.

All associations reported educational activities with a range of 1 to 90 percent of total resources allocated for this activity. All associations reported legislative and marketing activities, both constituting a range of 1 to 15 percent of resources. Pay ratios range from 1:1.5 to 1:36 with most associations paying a living wage and offering paid time off and retirement benefits. Nearly all participants had programming that promoted the cooperative economy as a whole beyond membership. Nearly all had members or a democratically-elected board approve their budgets.

Interviewees shared their thoughts on barriers to membership, successes and potential activities.

“This actually isn’t about economics. American culture, the culture that developers work in, the cultural expectations they set up, small business culture… On the left it looks like a DIY autonomist separatist nature and on the right it’s more of this neoliberal argument. Other cultures have more solidarity. The default is to plug into the institution.” – Esteban Kelly, Executive Director, U.S. Federation of Worker Cooperatives (USFWC)

“You’re at the whim of the administration. If you’re not intentional, it can make you stray away from the mission.” – Cornelius Blanding, Executive Director, Federation of Southern Cooperatives/Land Assistance Fund (FSC/LAF)

“The context in which these co-ops are coming into being is not just about the co-ops themselves. There’s lenders, lawyers, developers, incubators, working on a conversion maybe… in most cases, none of those people are pushing association membership.” – Esteban Kelly (USFWC)

“We explore concepts like anticipatory leadership, staking out your high ground and protecting it, the importance of conversation around critical topics where you may be delivering bad news, and ensuring that you have mutual understanding.” – Tracey Steiner, Senior Vice President of Education & Training, National Rural Electric Cooperative Association (NRECA)

NYCNoWC facilitates member-run programming that offers their expertise to all membership. FSC/ LAF operates a staffed training center with farming, kitchen and lodging facilities where agricultural techniques are researched. The Valley Alliance of Worker Cooperatives (VAWC) and Neighboring Food Co-op Association (NFCA) cofounded the Certificate in Applied Economic Research in Co-operative Enterprise within the Department of Economics at the University of Massachusetts, Amherst, which has 100-200 students a year and hosts internships. The International Centre for Co-operative Management (ICCM) at Saint Mary’s University in Halifax, the program in which this research was performed, is run by a co-op of cooperatives. NFCA partners with ICCM to educate members.

“One of the things that I think is very strong is how our members are helping members by… getting lots of information back on somebody who’s been through the same thing.” – Mary Pat Paris, Vice President, Administration, NRECA

“If you read cooperative history… independent federations, leagues and associations have been the drivers of successful, sustainable development of cooperative complexes. But these structures are generally undervalued in models that replace association with grant-funded development and nonprofit agencies.” – Erbin Crowell, Executive Director and Board Chair, NFCA and NCBA CLUSA

“We first look internally to find someone among membership to hire. We have people who have served this organization for a lifetime.” – Cornelius Blanding, FSC/LAF

There are countless more examples of inspiration, survival mechanisms, marketing, conversion and start-up specific support provided by associations. Here is a list of replicable activities from these associations:

What are the next innovations co-ops will champion? How will co-ops survive COVID? How can economic democracy address flawed political democracy? How are co-ops addressing systemic inequalities? Participants show that associations are addressing these questions through a cooperative-led value creation system. This value creation system serves members, expands resources, addresses systemic issues and builds the depth and breadth of cooperation. Co-op leadership and cooperative funding provide accountability instruments to sustain association focus on delivering value to members, and this focus is characterized by equity, democracy, solidarity, honesty and other co-op principles and values.

“We as an association have to lead by emphasizing our co-op identity… That’s the one thing [competitors] can’t beat us on is how we empower people to come up with their own solutions. So, we’re going to help our food co-ops source more locally but we’re going to do it in a way that reinforces our cooperative difference.” – Erbin Crowell, NFCA and NCBA CLUSA

As we ask these important questions and as we work together, doing so through association will conceive of and implement them in a way that is adaptable, adoptable and accountable. A just and equitable economy needs a just and equitable business model. Consumers, workers, producers and communities strengthen co-ops when they “#GoCoop.” Like them, co-ops strengthen the cooperative movement— and make our model more accessible—when they join associations.

Adam Trott is Director of Member Relations for Shared Capital Cooperative, a national CDFI loan fund that connects co-ops and capital to build economic democracy. He is also the Executive Director of the Valley Alliance of Worker Co-operatives, a co-op of worker co-ops that supports, develops and educates about and for worker cooperatives. Adam spent 13 years as a worker-member of Collective Copies, a worker collective and union shop in Western Massachusetts and served on his union’s Regional Executive Board. He received a Masters in Co-operative and Credit Union Management from St. Mary’s University in Halifax, Nova Scotia in 2019. This article is a summary of a research paper written at the International Centre of Co-operative Management, Saint Mary’s University, Halifax, Nova Scotia (ICCM), and can be accessed here: https://www.smu.ca/ academics/sobey/cme-working-paper-series.html. Adam would like to thank the participants for their generosity, expertise and dedication to the cooperative model, the ICCM and Suzette Snow-Cobb for their tremendous support of this research.

The unreported reality facing Black women caregivers, and how co-ops can help.

People support cooperatives; Co-ops can too, with associations.

Policy strategies to build an inclusive economy with cooperatives.